Unlisted Saudi Arabian Airlines Director General, Khaled Al-Molhem, stated the carrier plans to increase domestic and international flights as part of a strategic plan to improve services and better compete in the region. He said: “We have already started implementing the first phase of the strategy at the beginning of this year by operating direct flights to some destinations, increasing flights between Jeddah and Riyadh and operating more flights to European cities."

He said passenger traffic between Saudi Arabia and Europe increased by 20% to 169,300 in 1H2010. Phase two, which will commence on 01-Nov-2010, will see further expansion between major Saudi cities, with services to increase as follows:

Expansion will also occur within the Middle East/Gulf region, with services to Beirut to be increased from 11 to 17, services to Bahrain to be increased from nine to 14, Doha from six to 10, Amman from 10 to 12, Sanaa from five to nine and Aden from twice to three times weekly. During phase two of the plan, which will commence on 27-Mar-2011, the carrier will also expand its operations to East Asia. 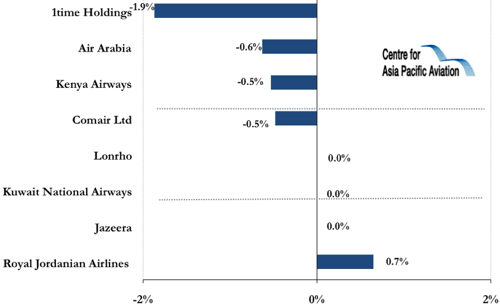