Shares in Ryanair gained 7.5% yesterday, as Europe’s largest LCC reported a 204% year-on-year increase in profit after tax to EUR319 million for the 12 months ended Mar-2010 and proposed its first dividend since it went public more than 10 years ago.

Revenues increased 2% to EUR3.0 billion in the 12 months as a 13% decline in average fares was offset by a 14% increase in passenger traffic to 66.5 million. The carrier strengthened its balance sheet by EUR535 million to EUR2.8 billion in the period.

At the other end of the spectrum, shares in Vueling declined 2.9%, as CEO, Alex Cruz, outlined details of the carrier’s “New Sustainability Model”. The plan involves improving the carrier’s product to compete with legacy carriers while at the same time keeping additional costs to an absolute minimum. The CEO estimated the carrier would handle an additional 1 million passengers by 2011, with approximately a third passengers are expected to be international travellers visiting Spain. 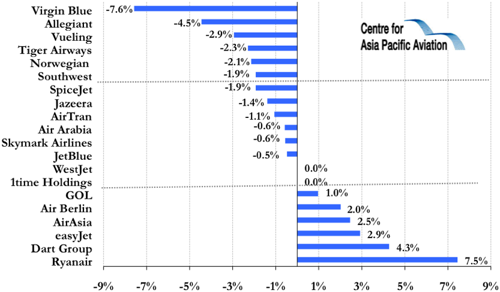