Ryanair will add Georgia as the 39th country in its network, with three route launches this winter and a fourth next summer. This followed intensive negotiations with the Georgian government, keen to cultivate new routes to EU destinations after Russia imposed a ban on direct flights between Russia and Georgia on 8-Jul-2019.

Before the ban Russia-Georgia routes were operated by Georgian Airlines and a number of Russian operators: Ural Airlines, Pobeda, S7, Aeroflot, Nordavia and Red Wings.

Russia imposed the ban in response to anti-Russia protests in the Georgian capital Tbilisi, but cited concerns over safety and air navigation services debts in connection with Georgian Airways and the much smaller Georgian operator MyWay Airlines. In late Sep-2019, Russia's foreign minister expressed hopes of a resumption of services, but did not give a time frame.

Georgia's aviation market has enjoyed strong growth in recent years but the Russian flight ban is interrupting this trend. Ryanair's entry comes at a politically opportune time for the Georgian government.

On 21-Aug-2019 Ryanair announced that it will launch its three routes from Georgia in Nov-2019. Tbilisi to Milan Bergamo will be operated four times weekly, and Kutaisi to Bologna and Marseille will both be twice weekly services.

In addition, Ryanair will launch a twice weekly Tbilisi to Cologne service in Apr-2020, after being persuaded by the Georgian Prime Minister of the importance to the country of having links with Germany.

Ryanair expects to carry 170,000 passengers annually to/from Georgia on these four routes and has said that it hopes to add new routes in the future.

None of Ryanair's four new routes are currently served by any operator, but Wizz Air will now also launch Kutaisi-Bologna in Nov-2019. Tbilisi-Cologne was previously operated in summer 2018 by Georgian Airways.

Ryanair's ultra LCC rival Wizz Air remains far bigger in Georgia by seat share and plans to launch a Kutaisi-Cologne service from 1-Jul-2020, expanding its Kutaisi network to 41 routes. In addition to the airline's Kutaisi-Bologna launch, the two new routes will bring an additional 94,000 seats to Wizz Air's Georgian network, amounting to more than 1.5 million seats in 2020.

It also plans to increase Kutaisi-Milan frequency to four times weekly from 19-Nov-2019 and launch Kutaisi-Nice service on 12-Dec-2019 (brought forward from its originally planned launch in summer 2020).

Annual seat growth has averaged 20% pa since 2012, but is set to reverse in the coming winter

However, year-on-year growth will slow to just 4.3% in 2019, and winter 2019/2020 capacity is currently indicated to fall by approximately 5% versus last winter.

The national airline Georgian Airways increased its annual seat numbers at an average of 15.9% pa from 2012 to 2019, which was slower than the market average, but it has achieved 21.6% pa since 2015, in line with market growth. 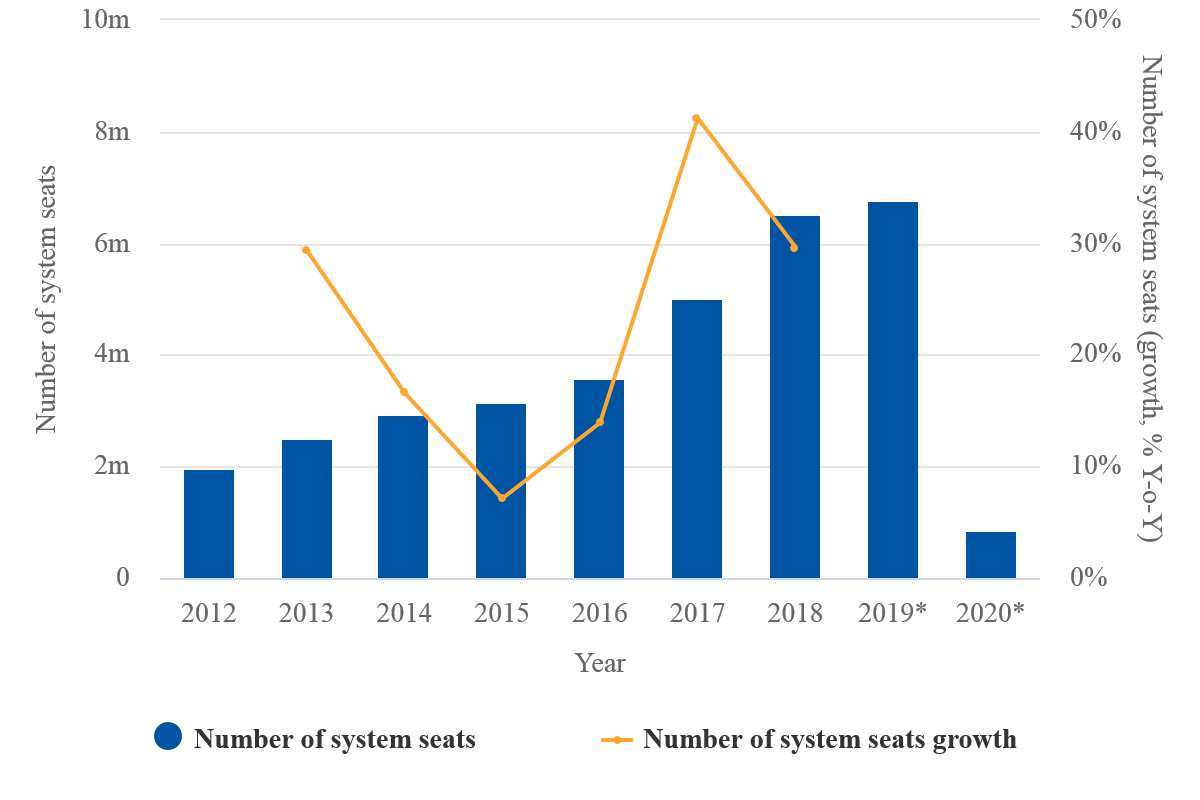 *The values for this year are at least partly predictive and do not cover the whole year.
Source: CAPA - Centre for Aviation, OAG.

Georgian Airways was the biggest airline by seats in Jul-2019

In the week of 1-Jul-2019, the last week before the Russia flight ban, Georgian Airways was the leading airline by seat capacity in Georgia, with a 12.9% share. This was ahead of Wizz Air, which had 11.1% (including a 0.4% share for Wizz Air UK).

Number three Turkish Airlines had 9.2% of seats, just ahead of Ural Airlines, which had 8.3%. Flydubai was fifth, with 4.3%, followed by Aeroflot's LCC subsidiary Pobeda, with a 4.0% seat share, S7 Airlines on 3.8%, and the Ukrainian LCC SkyUp at number eight, with 3.6%.

Wizz Air was the biggest airline by passengers in 1H2019

Wizz Air had more passengers than Georgian Airways in 1H2019, in spite of a lower seat share, reflecting its superior load factor.

The passenger share of the top five airlines in 1H2019 was 14% for Wizz Air, 11% for Georgian Airways, 10% for Turkish Airlines, 7% for Ural Airlines and 7% for Pobeda, according to Georgia's Civil Aviation Agency.

All LCCs operating in Georgia are foreign and predominantly based in Eastern/Central Europe.

In addition to Wizz Air/Wizz Air UK and the leading airlines in the country are the LCCs SkyUp and Pobeda, also in the top 10, and the other LCCs serving Georgia: flydubai (just outside the top 10, with 2.9% of seats in the week of 9-Sep-2019), Pegasus Airlines, Air Arabia, airBaltic, flynas and Onur Air.

Ryanair's entry will no doubt help to push the LCC seat share higher still in 2020.

However, traffic fell by 10% at Tbilisi and Batumi in Jul-2019 following the suspension of nonstop Russia services, although Kutaisi enjoyed 14% growth in Jul-2019.

E/C Europe is the leading destination region for Georgia: one fifth of this traffic was Russia

Georgia's schedule is dominated by international routes, accounting for 99.5% of seats in the week of 1-Jul-2019, which was just before the ban on direct flights to/from Russia.

Russia's 12.9% share of international seats accounted for just over one fifth of E/C Europe capacity.

Virtually all routes to/from Georgia are short/medium haul, with long haul destinations reached only through connections at hubs in Europe and the Middle East. However, there are signs that this could start to change: the Georgian Civil Aviation Authority has started to discuss with the US authorities the possibility of direct trans-Atlantic services. 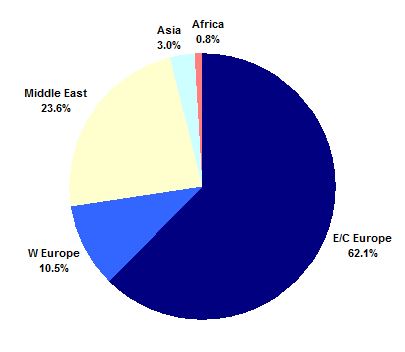 Ryanair's new services are good news for Georgia's government, which was keen to attract more EU routes even before the suspension of Russian services.

The country's Prime Minister, Mamuka Bakhtadze, said on 20-Aug-2019: "I have been personally receiving requests from our citizens to see Ryanair in Georgia and we made it happen".

Since a brief war with Russia in 2008, visitor arrivals to Georgia have grown from 1.5 million in 2009 to 7.2 million in 2018. The Georgian National Tourism Administration worked hard to achieve this growth.

Airline capacity between Russia and Georgia had been on a growth path before the ban. Weekly one way seat capacity between the two countries was less than 3,000 seats five years ago in the summer of 2014. In Jun-2019, it had risen past 21,000 seats.

Visa-free travel to the EU and expressions of support from the European Council (which called the ban "unjustified and disproportionate"), together with Ryanair's entry, suggest that Western Europe could take over from Russia as an important source of aviation demand for Georgia.