Ryanair, on 01-Apr-2010, raised its profit after tax guidance for the 12 months ended 31-Mar-2010 from a previously-guided EUR275 million to “not less than EUR310 million”, as a result of stronger-than-expected passenger bookings and better-than-expected yields during late Feb-2010 and Mar-2010 in the run up to the Easter holiday weekend.

The move is the second time in two months the carrier has raised profit guidance for the year, with CEO, Michael O’Leary, raising after-tax profit estimates from the lower end of a range of EUR200-300 million at the LCC’s third quarter results announcement in Feb-2010. Mr O’Leary also stated in Feb-2010 that he expects average fares for the full year to decline “closer to 15% than the 20% previously guided”.

Following the announcement, German broker, Commerzbank, maintained its “hold” rating on the carrier’ stock, but raised its net profit estimate to approximately EUR329 million, compared to a previous forecast of EUR295 million. The target price for Ryanair shares remains at EUR3.90.

Also commenting on the forecast, Davy Stockbrokers stated, “we believe that this represents a tipping point on yields, which have fallen by over 20% over the last three years from peak to trough”, adding, “we believe the likely causes for improvement are competitor capacity take-out over the last year, particularly against Ryanair; a strong mix of new bases and routes; and, in particular, more year-round early sun routes such as Malta and the Canaries. Ryanair has also been paring back the level of aggressive discounting relative to last year as competitors raise prices”.

In other news, Ryanair announced plans to "incentivise its passengers to travel light" during the peak Summer months by increasing checked-in baggage fees for Jul-2010 and Aug-2010 from EUR15 to EUR20/bag, for all bookings made from 07-Apr-2010.

(In other LCC-related baggage news, US “ultra-LCC”, Spirit Airlines, on 06-Apr-2010, announced plans to introduce new carry-on baggage fees, ranging from USD20 to USD45, for luggage to be stored in overhead compartments. Spirit also announced a new fare structure which it claims will reduce the lowest single fare by over USD40 on average, and reduced checked-in baggage charges). 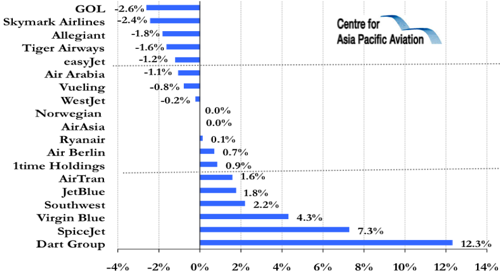