Ryanair has raised its full year profit outlook with the carrier now expecting to exceed the upper end of its previous forecast range of EUR350 million to EUR375 million, to report a profit of EUR380-400 million subject to 4Q yields. Based on forward bookings in the current quarter, traditionally the weakest for European carriers, Ryanair anticipates that winter (H2) yields will exceed its previous forecast, with full year yields now anticipated to be at the upper end of the +5% to +10% range which was previously indicated – ie close to 10%.

Ryanair’s result continues a trend of the major European airlines announcing higher earnings and upgrading forecasts although this has not always to the benefit of their share prices (Ryanair's share price for example tumbled 5.3% upon the release of the financial results as the results fell below analyst expectations). British Airways last week posted its first profit in two years - its share price also declined 3.6% upon the release - while Air France and Lufthansa have both raised their forecasts. Specifically, Air France-KLM raised its operating result forecast to positive after previously stated in Jul-2010 it expected to break even at the operating level for the year while Lufthansa, which reported an operating profit of EUR783 million in the three months ended Sep-2010, upwardly revised its operating result to exceed the EUR800 million market with a full year profit projected for its Austrian Airlines unit.

Ryanair, Europe’s largest LCC, reported a 32% increase in second quarter net profitability to EUR330 million, with a net profit of EUR424 million in the six months to Sep-2010 and year-on-year growth of 13.5%, for a net profit margin of over 20%. (See end of article for key financial figures for both the three months and six months ended Sep-2010). 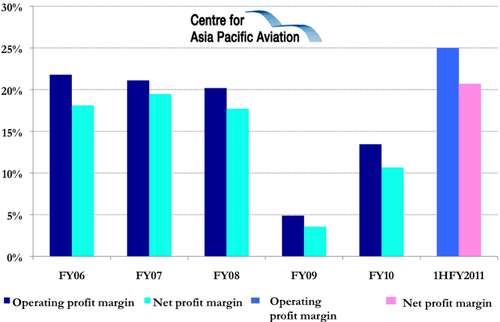 CEO Michael O’Leary stated the carrier has benefited from the recession, commenting: “The old analysis is that in a recession people stop flying, or fly less. In fact it’s not true. They just become much more price sensitive and switch off the high-fare carriers and on to Ryanair.” The carrier added that it expects to continue to gain market share across Europe from the ‘Big Three’ network carries – Air France-KLM, British Airways and Lufthansa.

Passenger numbers advanced, +10% in the six-month period, with fares increasing 12% to EUR45 and revenue per passenger growing by the same degree to EUR54. Revenues strengthened 23% to EUR2.2 billion with ancillary revenues also up by a similar rate to EUR424 million faster than the 10% increase in passenger volumes - due to a combination of higher onboard spend (which was helped by longer sector lengths), improved product mix and higher Internet related revenues. Ancillary revenue per passenger rose 11% to over EUR10 per passenger. 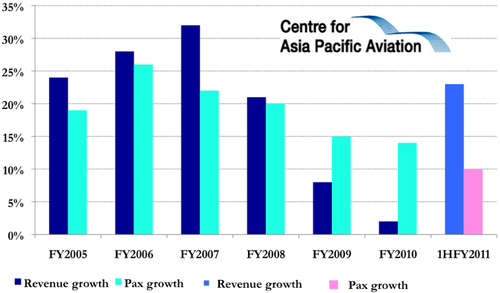 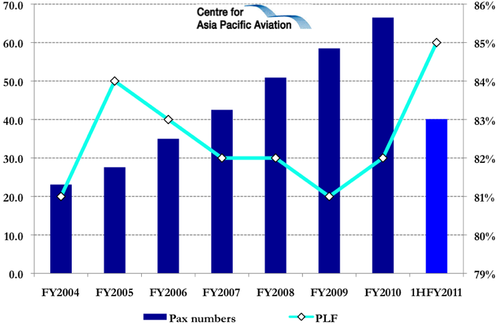 Unit costs increased by 13%, primarily due to the 12% growth in sector length and higher fuel costs. The carrier’s fuel bill rose by 44% to EUR660 million on the back of an increased level of activity and higher prices. Unit costs excluding fuel rose by 4%, and sector length adjusted, they decreased 8% as Ryanair lowered aircraft ownership, airport and handling costs.

The carrier stated it continues to “welcome vigorous competition between airports for Ryanair’s traffic growth”. This resulted in airport unit costs falling by 3% during the half year as the carrier withdraws from ‘high-cost’ and problematic airports – such as Frankfurt Hahn, Marseille, Shannon and Belfast - and increases capacity in markets such as Italy, Spain and Portugal.

As previously reported, Mr O’Leary recently stated the carrier is considering opening routes to all major European airports, with the exception of the top three – London Heathrow, Paris Charles de Gaulle and Frankfurt am Main – as slowing growth prompts it to modify its strategy of operating only to less-costly terminals and secondary airports. See related article: easyJet to slow growth, Ryanair to target major airports

Pax and fleet growth slowing but off a large base

The carrier also provided updates on its fleet plans, the impact of the Icelandic volcanic ash cloud, its dividend strategy, its position on Aer Lingus and its hedging strategy: