Ryanair’s shares gained 7.2% after Europe’s largest LCC raised its earnings forecast, as a smaller than expected yield fall (a 12% reduction, rather than the up to 20% reduction previously guided) helped narrow the carrier’s third quarter loss to EUR11 million (compared with EUR119 million in the previous corresponding period).

The carrier expects net profit to be EUR275 million in the 12 months ended Mar-2010, up from an earlier forecast of towards the “lower end” of the EUR200-300 million range. The yield performance is expected to continue in the fourth quarter (for an expected full year decline “closer to 15%” rather than the 20% previously guided).

Goldman Sachs, meanwhile, raised Ryanair’s target price from EUR3.80 to EUR3.90, with easyJet’s price target raised from GBP4.00 to GBP4.30, with a ‘buy’ rating. easyJet’s shares were up 2.1% yesterday.

Goldman Sachs also raised Norwegian Air Shuttle (shares up 1.6%) from ‘neutral’ to ‘buy’, citing the LCC’s compelling valuation and the existence of a route network with little significant competition, particularly from Europe’s large LCCs, Ryanair and easyJet. Goldman Sachs added, "pricing has held up well as a result of a resilient Norwegian economy, coupled with strong growth in ancillary revenues".

In the Asia Pacific region, Tiger Airways’ shares were down 0.7% yesterday. The recently-listed carrier reported a 48% jump in passenger numbers in Dec-2009, to 456,000, with a passenger load factor of 90%, after reporting a notable 7 ppt load factor improvement in the month. The LCC handled 1.3 million passengers in the three months to Dec-2009, a 54% year-on-year increase. 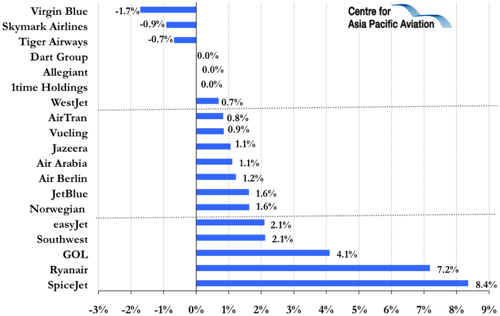