Ryanair, Europe’s largest carrier, reported a 26% increase in full-year net earnings to EUR401 million despite higher oil prices, ongoing macro concerns in key markets, and volcanic ash disruptions in 1Q2010. CEO Michael O’Leary, however, warned of difficult trading conditions in the current year, which will see and flat earnings growth and a dramatic change in tack at the world’s model low-cost carrier.

The EUR401million net result came in ahead of the guided EUR380-400 million range. Despite the strong result, Ryanair shares plunges 5% in Europe (in line with other airlines on the date), due to the provision of a highly conservative outlook for the current year.

* result based on IFRS

The airline was “pleased” with the result, but added “since we have limited visibility on bookings, we remain concerned at the impact of the recession, austerity measures, and falling consumer confidence on fares”.

Pax traffic up in 2011, but on a clear downtrend

Revenue in FY2011 increased 21% to EUR3.63 billion on the back of an 8% increase in passenger numbers to 72 million, on the back of the ongoing economic recovery across Europe and the improved pricing environment in the year. Total revenue per passenger increased 12% to EUR50, driven by improved yields and a strong ancillary revenue performance. 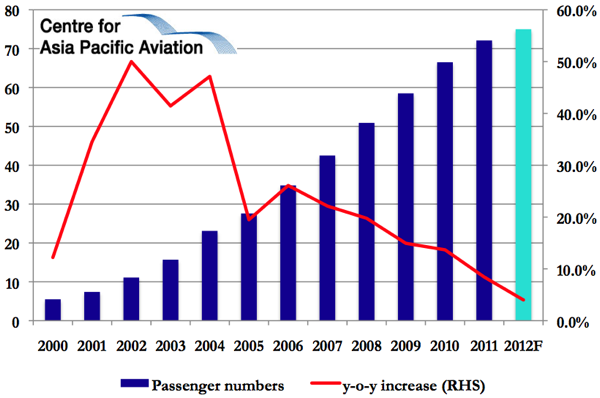 Average fares were up 12% in the period, closely in line with the LCC’s 10% increase in sector length as saturation in short-haul market forces the carrier to look further abroad for growth opportunities. Its average fare remained Europe’s lower in FY2012 at EUR39. Ryanair reported another strong performance in ancillary sales, which increased 21% to EUR802 million, far outpacing the 8% increase in passenger numbers. Ancillary revenue per passenger increased 12% in the period, which the carrier attributed to an improved product mix and higher internet related revenues. Ancillary revenue accounted for 22% of total revenues. 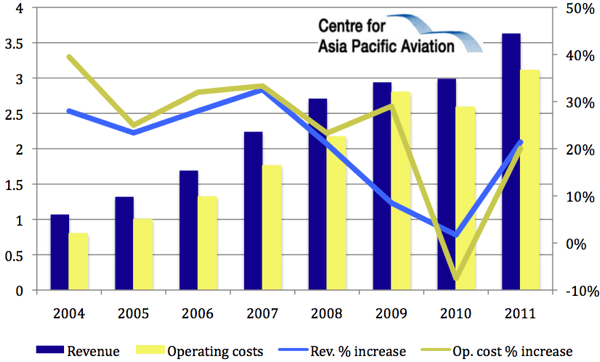 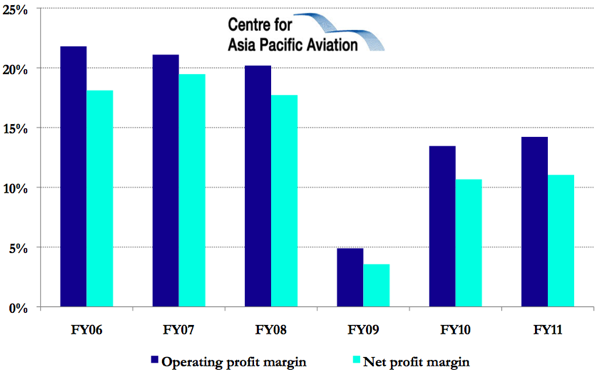 In contrast other carriers reporting recently, many of which have been pushed into the red due to cost blowouts, Ryanair’s result impressed on the cost side. The carrier’s relentless focus on costs and aggressive hedge book did not neutralise its work on the revenue side, a theme that has been common in recent earnings reports.

Naturally, Ryanair had much to say about operating costs, which were up 21% in the period and are expected to sharply increase in the current year. The airline’s fuel bill increase 37% to EUR1.22 billion on the back of a USD11 pbl increase in the average price of oil to USD73. Ryanair’s unit costs increased 11% due to higher oil prices and the 10% increase in sector length. Ex-fuel unit costs increased 3%. Ryanair’s key operational edge was again evident in the sector length-adjusted unit costs, which fell 7%, reflecting the carrier’s rigorous focus on costs, including reductions in staff and airport and handling unit costs. The carrier booked a pre-tax exceptional charge of EUR29.7 million relating to the Apr-2011 ash cloud crisis.

As part of plans to keep a lid on costs it feels are variable, Ryanair took aim at the Irish government’s aviation and tourism policy, reiterating its calls for the Dublin Airport Authority to be broken up to deliver competition and lower airport charges in its home market. The LCC warned doing the opposite will result in “further tourism and job losses in the Irish economy.” Ryanair added, however, that the government’s decision to scrap the tourist tax would be meaningless unless accompanied by more competitive airport charges in Ireland.

On the jet fuel front, the carrier stated that continued escalation in oil prices would force competitors to increase fares and fuel surcharges, which will encourage consumers to trade down to Ryanair’s lower fares. The LCC noted that in some instances, fuel surcharges at competing carrier’s are actually higher than the Ryanair base fare. “Higher oil prices will lead to further consolidations, increased competitor losses, and more airlines going broke. This creates further growth opportunities for Ryanair because we operate the most fuel efficient aircraft, have the lowest operating costs, and the strongest balance sheet.” The LCC expects to increase market share and expand into new markets “as high oil prices force competitors to further cut capacity, or go bust” in winter 2011/2012.

Change in tact – 'negative on traffic

The most notable aspect of Ryanair’s results was the sharp change in strategy. Ryanair, which had spent the past 10 years on a diet of double-digit passenger growth, expects to reverse the trend over winter.

While passenger numbers are expected to grow 10% in the seasonally stronger first half, the airline will reduce capacity by 4% in 2HFY2011, This will be achieved by ground up to 80 aircraft, compared to the grounding of 40 aircraft in 2HFY2010. “Higher oil prices next winter, and the refusal of some airports to offer lower charges, makes it more profitable to tactically ground up to 80 aircraft rather than suffer losses operating them to high cost airports at low winter yields,” the airline said.

The move will be the first time the airline has pulled back network-wide capacity in its 20-year history. CEO Michael O'Leary said that the airline’s fleet of B737-800s was “growing too fast”, with 272 already in operation and 40 more expected by the first half of 2012. He said that despite the company having secured discounted rates for 90% of its fuel needs through the end of 2011, those costs were still too high to justify keeping the full fleet. The lower capacity over the winter will see passenger numbers in the second half fall 2% (Q3) and 4% (Q4).

Mr O’Leary said: “The aim is to lose less money in the winter months", adding that it may lead to redundancies in ground staff 25 B737-800s will be delivered by winter, bring the airline’s fleet to 292 aircraft, but the new equipment will not be put into service until the summer schedule in Apr-2012. "If you are facing oil at $110 per barrel this winter it is not a time when you want to be opening new routes and bases," he said. “After growing rapidly for 20 years I would like to take a year or two of no growth and take a look at which airports are not offering us good business terms. Instead of running around trying to open up new bases and routes in November and December, we'll sit them on the ground. With higher oil prices it makes no sense." 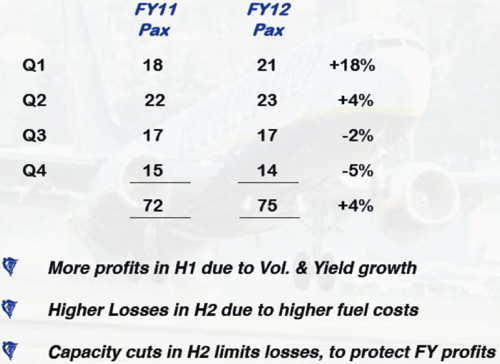 Ryanair expects to increase full-year traffic by 4% to 75 million, weighted +10% in H1 and -4% in H2. Passenger growth of 4% would be the lowest annual rate in at least 15 years at the carrier and marks a new dynamic for the LCC, which has grown traffic by an annual average of 29.5% over the past decade. The new reality is saturated short-haul markets and slower growth, which is driven by a higher fuel price environment and a concerted effort to increase, rather than continually decrease, yields. A sharper focus on ancillaries is likely, as is the airline’s attempts to renegotiate costs at the major airports that now feature on the Ryanair network. The LCC has leverage in such negotiations, given the wider economic impact of Ryanair services, the airline’s swift decision-making about capacity allocation, and the demonstrated growth the LCC can deliver.

One area of concern for the airline will be how its lower capacity growth will affect the Irish government’s decision to scrap the tourist tax, which remains conditional upon Ryanair and Aer Lingus increasing capacity from the Emerald Isle. Ryanair, as with many incremental cost increases, has been the leading proponent behind the removal of the tax.

Ryanair expects to increase yields 12% on the back of slower revenue growth, a new mix of routes and bases and competitors’ more substantial price/fuel surcharge increases. The airline warned that sluggish economic growth and lingering concerns about the recession, austerity measures and falling consumer confidence remains remain the key concerns to its guidance on fares.

Michael O’Leary stated that after the LCC takes delivery of its final B737-800 in 2013, it will not be taking on new aircraft until 2016 “at the earliest”. The LCC plans to build its cash to EUR4 billion for a major plane order, the CEO said. He added that the airline is in talks with Russian and Chinese aircraft manufacturers, as he isn’t “getting anywhere with Boeing”.

O’Leary stated that it is “likely” Ryanair is changing from an airline that increases earnings by adding volume to a “slower-growing” airline, that increases earning through higher yields. He warned in 2010 the airline's "pile it high and sell it cheap" approach would inevitably change because slower rates of growth will need to be balanced with higher fare revenue.

Even with the fare increases, Ryanair expects FY2012 net earnings to come in at EUR400 euro, which would be flat over the 2011 result. The figure is 18% below analyst estimates. Operating costs are expected to grow 13% in FY 2012 with ex-fuel sector length-adjusted costs up by 2%, mainly driven by EUROCONTROL and staff cost increases.

Mr O’Leary, however, stated that Ryanair would still be growing faster than its peers. The airline’s slower growth forecast is in line with the slower growth forecast for the European region, and in slow-growth, mature markets, the only way to increase business is to take it from others. Ryanair remains confident of increasing market share in Europe, particularly in the face of high oil prices, which encourages competitors to increase fares/surcharges and increases Ryanair’s offer of low fares, which the carrier is confident “always wins”.

The highly cash-generative, proven and lean Ryanair business model will continue to excel in the difficult trading environment, particularly relative to its peers. Profitability at the airline will be driven by the airline leveraging its industry-leading low cost base and its ability to raise fares relative to the widening pricing gap between it and the next lowest competitors on the market.

O’Leary, ever cautious on costs, warned European airspace authorities to be careful with how it handles the Grimsvotn volcano eruption that is threatening European airspace. He stated European airlines should be allowed to deal with the consequences of the ash themselves, rather than wait for advice from weather agencies and air navigation service providers. “As long as the European regulators and the Met Office don’t start producing charts with big black clouds over Europe that don’t exist, we will be fine this time,” the CEO stated.