Royal Jordanian is preparing a new 10-year business plan aimed at restoring profitability through network adjustments and fleet renewal. The carrier has been significantly impacted by the political instability in the region as Egypt, Lebanon, Libya and Syria are among its biggest markets. But Royal Jordanian’s strategy of focusing on connections within the Levant and Gulf regions remains intact as it views its current reliance on Europe-Asia transit traffic, which comes with unsustainably low yields, as temporary.

The new business plan will again focus primarily on regional growth, with replacement and expansion of its single-aisle fleet from 20 to about 30 aircraft. Royal Jordanian is now looking at acquiring A320neos as well as Embraer E-Jet E2s or Bombardier CSeries.

Previous plans to expand the widebody fleet from seven A330-200/A340-200s to 11 787-8s will likely be dropped, resulting in the sale or cancellation of its last four 787 orders. Royal Jordanian is phasing out its A340s in late 2014 as it takes its first five 787s, leading to much needed efficiency improvements, and plans to phase out its A330s in 2016 as a second batch of 787s are delivered.

Royal Jordanian currently operates a fleet of 37 passenger aircraft across a network of about 55 destinations. But the oneworld carrier is in the process of once again adjusting its network in response to challenging market conditions. Royal Jordanian has dropped five destinations from its scheduled network over the last two months and is planning to identify additional routes for termination over the next few months as its network review continues.

Services to Benghazi in Libya were also recently suspended but this is considered temporary. Libya is an important market for Royal Jordanian with 10 weekly flights to Tripoli (which continue) and four weekly frequencies (currently suspended) to Benghazi. 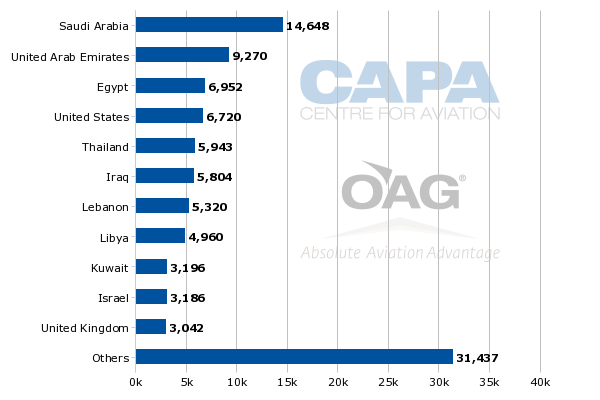 In Egypt, Royal Jordanian continues to serve Cairo with up to four daily frequencies. Cairo is still the carrier’s fourth largest route (after Jeddah, Dubai and Beirut) but capacity has been reduced over the past two years. 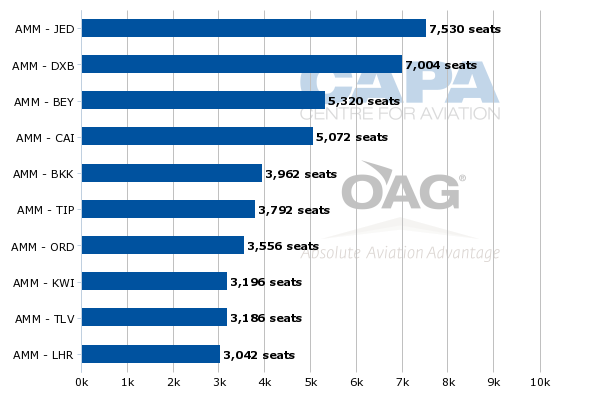 Accra was launched in Jul-2013 as part of an increased focus on Africa under the previous network strategy. Accra and Lagos, which were served on a combined routing, became the carrier’s first two destinations in sub-Saharan Africa. Royal Jordanian at least for now continues to serve Lagos with two weekly A319 flights but expansion in sub-Saharan Africa is not likely to be a focus under the new 10-year business plan.

Royal Jordanian also has been heavily promoting connections to India and Thailand from Europe. The carrier currently serves Bangkok daily (with four frequencies continuing on to Hong Kong and three to Kuala Lumpur) while Delhi is served with five weekly flights and Mumbai with four weekly flights, according to OAG data. But Royal Jordanian aims to de-emphasise intercontinental connections as this type of traffic is low yielding and was only pursued to offset a drop in regional connecting traffic within the Levant and inbound visitor traffic to Jordan due to the continuing political instability.

The new business plan is expected to focus again on the Levant and Gulf regions, which have traditionally been Royal Jordanian’s strength. Prior to the Arab Spring Royal Jordanian enjoyed a profitable niche offering regional connections in relatively undeserved but high yielding regional markets. Competing against the big Gulf carriers in medium and long-haul markets, particularly markets requiring a heavy dependence on connecting passengers, has always been a difficult proposition for Royal Jordanian given its relative small size and scale.

“It’s still our strategy to focus on our strength in the Gulf and Levant,” Royal Jordanian head of network management and alliances Basma Al-Majali told CAPA on the sidelines of the 2-Jun-2014 IATA annual general meeting in Doha. “We still see this is our competitive advantage.”

Ms Al-Majali also has been serving as acting vice president commercial. Royal Jordanian has undergone a management shuffle in recent months as the carrier works on a new business and turnaround plan. Chairman Nasser Lozi took over at the end of Apr-2014 as interim CEO, replacing Amer Adidi who stepped down after running the carrier during a challenging two years. Meanwhile, former Bahrain Air CEO Richard Nuttall has been appointed as Royal Jordanian’s new chief commercial and strategy officer.

Royal Jordanian hopes to return to profitability by 2016

Ms Al-Majali says Royal Jordanian aims to add back capacity to Egypt, Libya and Lebanon once these markets stabilise. The carrier is also keen to return to Syria, which remains a key market in its long-term business plan. Services to Aleppo and Damascus were suspended in 2012 due to the crisis in Syria.

As the focus on the Levant and Gulf region returns, Royal Jordanian will drop smaller destinations which are not beneficial to the overall strategy. Sri Lanka and Ghana were clearly under-performing and other non-core routes will likely get the axe.

Over the medium to long term Royal Jordanian is confident market conditions in the region will improve. This is reflected in its expectation to return to profitability in about two years.

After posting a small profit in 2012, Royal Jordanian incurred a large loss in 2013 and expects another loss for 2014 and likely another loss in 2015. Prior to 2011, when the start of the Arab Spring led to a large loss, Royal Jordanian had been profitable for six out of seven years – benefitting from a period of relative stability as it profited from its Levant niche.

The carrier's confidence in the improvement of market conditions in the Gulf and Levant regions is also reflected in its narrowbody fleet plan, which envisions significant growth in the latter part of the new 10-year business plan.

Royal Jordanian’s single-aisle fleet currently consists of 12 A320 family aircraft and eight E-jets. Two A321s were retired over the past year, leaving it with two remaining A321s along with six A320s and four A319s. Its E-jet fleet consists of three E175s and five larger E190s, according to the CAPA Fleet Database.

Ms Al-Majali says Royal Jordanian is now studying new narrowbody aircraft options as part of its 10-year plan. The carrier plans to acquire replacements for its 20 existing narrowbody aircraft, all of which are currently less than eight years old, and acquire about nine or 10 growth aircraft.

Royal Jordanian average fleet age by type: as of 8-Jun-2014 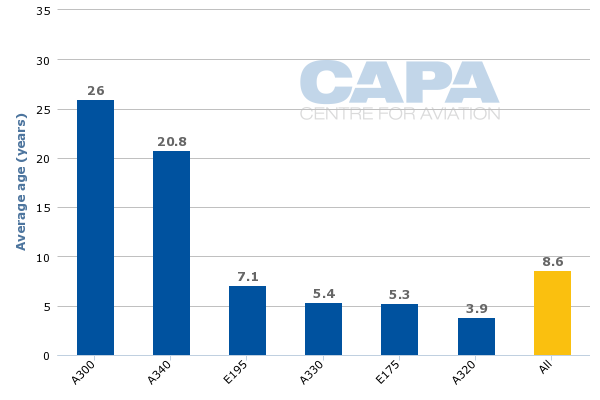 The fleet plan does not envision any narrowbody deliveries in 2014 or 2015 as Royal Jordanian focuses over the short term on adjusting rather than growing its network. Most of the growth and renewals are likely in the second half of the 10-year plan. But A320neos could potentially be leased from as early as 2017. CSeries could also be delivered from 2016 but if Royal Jordanian opts to stick with Embraer and take re-engined E2s deliveries will likely not begin until about 2020.

As Royal Jordanian studies narrowbody options it will also consider potential changes to its narrowbody mix in parallel with its network study. Two types will likely be retained as Royal Jordanian needs a smaller aircraft type for thinner route. But depending on network adjustments and the type of aircraft ordered it could potentially change the current 60/40 Airbus/Embraer ratio.

The widebody fleet plan will also likely be adjusted although the overall strategy of replacing A330s and A340s with 787s will certainly remain intact. Royal Jordanian originally placed an order in 2006 for 11 787s, which were initially slated to be delivered in 2010.

Royal Jordanian is now expecting to finally receive its first 787-8 in late Aug-2014. The carrier plans to take four additional 787s by Nov-2014.

The new type will initially be used from the beginning of Sep-2014 on a wide mix of regional routes. But this is seen as a temporary deployment plan that is needed to help train the first batch of Royal Jordanian’s 787 pilots. Once the initial training period is completed and all five aircraft from the initial batch are delivered, Royal Jordanian will be using 787 to take over all of its flights to North America.

Transitioning to 787-8s will significantly improve the profitability of Royal Jordanian’s trans-Atlantic operation as most of the carrier’s North American services are now served with inefficient A340-200s, all of which are over 20 years old. But the carrier does not envision growing its North American or overall long-haul network as its focus is on leveraging its strength in the Levant region.

Royal Jordanian’s other three long-haul destinations – Bangkok, Hong Kong and Kuala Lumpur – are slated to transition to the 787 in 2016 as the carrier currently does not have any 787 deliveries slated for 2015. In the interim period the Amman-Bangkok-Hong Kong and Amman-Bangkok-Kuala Lumpur route will be served with A330s as the carrier plans to phase out its four A340s by the end of 2014.

The A330s are only five to six years old and were acquired as an interim A310 replacement solution pending delivery of the 787s (Royal Jordanian no longer operates A310 passenger aircraft but still has two A310 freighters). Over the long term Royal Jordanian envisions only using its new fleet of 787s on long-haul routes to North America and Asia with the possible exception of some seasonal flights to Dubai and London – likely during periods of reduced long-haul frequencies when the carrier has spare 787 capacity. Royal Jordanian now uses the A330 on some London and Dubai flights although these routes are mainly served with its largest narrowbody, the A321.

While Royal Jordanian’s 787 commitment currently still stands at 11 aircraft the carrier will likely not take delivery of the entire order. Keeping its widebody fleet at the current seven aircraft level is the sensible strategy given Royal Jordanian’s current position and its regional focus.

When the 11 aircraft were ordered market conditions were drastically different and long-haul growth was more achievable. Royal Jordanian has not yet finalised any plans for the final four aircraft from its 787 order but it should not have a problem selling the aircraft or cancelling the orders given the demand for 787-8s in the marketplace and the fact it acquired the aircraft early, presumably locking in competitive prices. (The severe delivery delays also should give Royal Jordanian some leverage in cancelling the last four aircraft should it need to.)

Focusing on regional connections, including with oneworld partners, is the right strategy over the long term. There Royal Jordanian has some control over its own destiny. But ultimately Jordan's flag carrier will need a more stable surrounding political environment if it is to prosper.