Royal Jordanian (-1.6%) yesterday lost some of its gains the day prior. Over the weekend, the carrier announced it is targeting a 17% year-on-year increase in cargo volume in 2010. The carrier transported 44,000 tons of cargo in 2009.

Also in the Middle East, Kuwait National Airways (+1.8%) continued to make gains, while Jazeera Airways (+1.0%) was also up. Air Arabia was flat.

In Africa, Kenya Airways (+2.1%) was up. The carrier was named African Business Airline of the Year at the African Investor Tourism Awards. Comair meanwhile was flat, as Lonrho (-2.0%) and 1time Holdings (-4.4%) fell, despite a rise in the South Africa’s Africa All Share Index (+0.8%).

Elsewhere in Africa, Airline Operators of Nigeria (AON), reportedly stated it believes a “market imbalance” exists between Nigerian airlines and foreign airlines operating in Nigeria, which has led to unfavourable competition from foreign “subsidised” airlines. Foreign airlines were said to have dominated Nigeria’s airspace, with “virtually all of them” operating into two or more Nigerian airports from their countries of origin, without reciprocity to Nigeria. To remedy the “one-sided agreements”, AON has proposed that foreign airlines be restricted to a single airport of entry from 2012, which AON believes will encourage Nigerian airlines to expand into international routes. 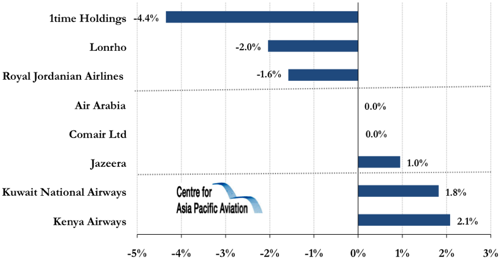