Royal Jordanian gained on Wednesday (05-Apr-2010) despite CEO, Hussein Dabbas, stating it may only generate “slight” profit in 2010 due to an increase in fuel costs. However, he added that the carrier has seen “encouraging” signs the economy is improving and a resurgence in passenger numbers. The carrier is targeting a 13% increase in passenger numbers for the year and a 70% load factor.

Royal Jordanian also announced plans to sell three SAS A310 aircraft and replace them with two A330s leased from Amentum Capital Ltd. The carrier is also negotiating to lease a third 330. The A330s are to fill the delay in B787 deliveries, which are now due from 2013. The carrier operates a fleet of 29 aircraft.

Air Arabia (+0.4%) gained slightly on news Cyprus' Minister of Trade, Commerce, Industry, Tourism and Energy, Antonis Paschalides, confirmed the LCC has received the rights to operate with three times weekly frequency to Cyprus and should launch operations by 4Q2010 or 1Q2011 from its  Sharjah hub. 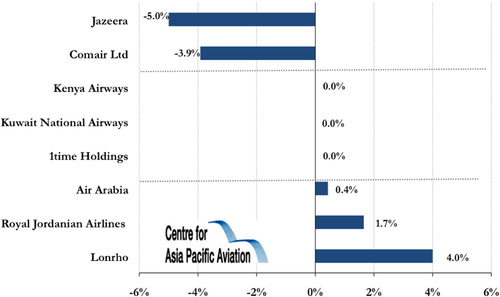