Wataniya to announce details of European and Egyptian services next week

Kuwait National Airways was flat. Subsidiary, Wataniya Airways, announced plans during trading to reveal the details of its first three European destinations (Istanbul, Vienna and Rome) and its third Egyptian destination (Alexandria) at the Arabian Travel Market (ATM) on 05/08-May-2010. The new services will increase the airline’s destinations to 12 using six A320 aircraft.

In Africa, Kenya Airways (-1.7%) reportedly plans to reconfigure its E170 cabin to include Business Class seats, following complaints related to the aircraft's Economy-only configuration. The new layout will have eight Business seats in a dedicated cabin. The overall number of seats on the Embraer will be slightly reduced due to the reconfiguration.

Elsewhere in Africa, 1time Holdings and Lonrho were flat, while Comair (+1.9%) was the day’s only gainer, despite a 2.7% decline in South Africa’s JSE index.

African airlines are now starting to benefit from the upturn, having lost market share. RPKs in the region grew 10.4% for the period. 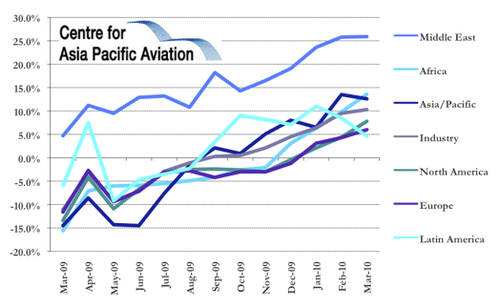 Both regions also witnessed a rise in capacity (ASKs), growing 15.8% and 8.2% in the Middle East and Africa, respectively. 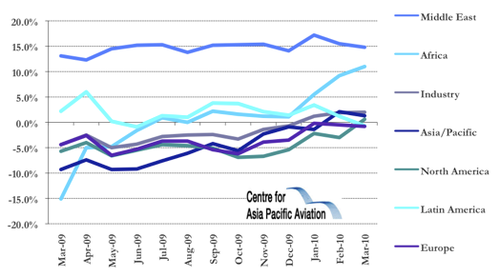 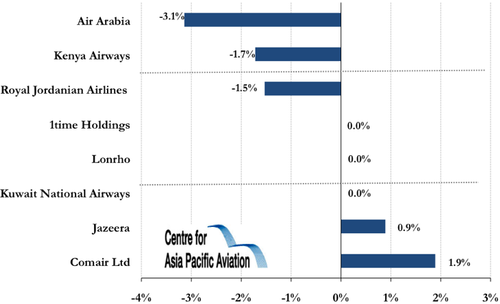