Rockwell Collins CEO, Clay Jones, stated the aerospace services and MRO markets will face “two quarters of really, really bad comparables, because of the shape of 2008” and has forecast that the industry will not see a robust recovery until 2011.

The comments echo those of EADS CEO, Louis Gallois, who forecasts slow aircraft ordering in 2010 and 2011, because of the weakness of airline balance sheets. See related article: Weak and fragile recovery, but losses set to continue in 2009

Rockwell Collins expressed concern at its results presentation in late Jul-2009 that major aerospace manufacturers could further revise their production plans downward, affecting revenue in 2010, although the company is more confident about an early recovery in the business jet market. Mr Jones forecasts airline activity, and spending on maintenance and refit programmes, would not begin to improve until late 2010, leading to a full recovery for the aftermarket products and services segment in 2011. He expects the second half of Rockwell Collins’ next financial year (commencing Oct-2009) will be much better than the first half.

Ratings agency Standards and Poor’s recently predicted a “tepid” recovery for aerospace manufacturing in 2010. Other aerospace suppliers have been slightly more bullish in recent months, with most forecasting a recovery in early to mid 2010. MTU Aero Engines expects its MRO unit to continue to show solid revenue improvement through 2009 and 2010. The Canadian Conference Board also forecasts a “modest” profit for its domestic aerospace manufacturers, citing strong order backlogs.

The only strong performance was by Menzies (+4.1%), which has gained almost 50% over the past fortnight, due to the strong outlook for both its airports and distribution/publishing divisions. 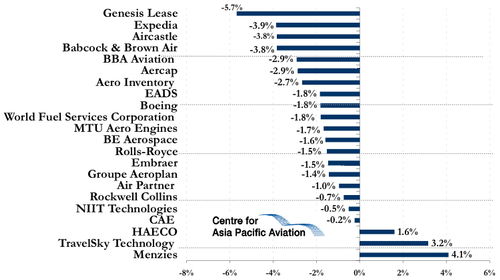