Rising fuel prices: The constant sorrow of the airline industry

Throughout the past year's stuttering recovery, oil prices have constantly loomed in the shadows. They now seem to be about to subvert the recovery agenda. The Middle East is unlikely to return to normality quickly and, although there is no real shortage of oil yet, there is sufficient nervousness – and speculators with an interest in inflated prices – to push the level unpredictably. The double jeopardy too is that uncertainty tends to push the safe-haven US dollar higher, implying even larger cost increases in many other currencies.

At current prices (with Brent crude at about USD115), jet fuel prices are close to the tipping point for airline profitability and, while limited fuel surcharges may hold, it is doubtful the market is sufficiently resilient to absorb much more in the way of higher fares. The double impact will translate quickly to the bottom line. Price increases unfortunately stimulate an almost inverse correlation relationship, where costs increase on one side and yields soften as discretionary spending slows.

Improved business travel demand has been the key to recently improved yields. That momentum should continue for the immediate term, as business sentiment generally remains positive (despite soft retail numbers), but if that turns – as it will if the present trend continues – revenues will be hit.

The issue is not as simple as higher fuel prices. It is about the rate at which they increase. If they move steadily upwards, rather than spiking as they did in 2008, airlines have the breathing space in which to adapt and, for example, adjust capacity and route structures. A negative reminder of the possibility of spiking is that oil prices had scarcely gained a mention as recently as IATA’s Dec-2010 industry forecast.

The industry body had then marginally upgraded its projected price average for 2011 from USD79 to USD84 per barrel, noting that central bank liquidity and capital flows were “threatening to generate asset and commodity price bubbles, helped by improved economic sentiment outside of Europe”. This was of course before the wave of Middle East uprisings. Since then, much has changed. As demonstrated by the graph below, there is a tendency for the crack margin, the gap between oil and jet fuel prices, to be accentuated when oil prices rise quickly, as they did in mid-2008.

Even under that Dec-2010 scenario, IATA was already predicting “some slippage” in industry net profits this year, reflecting weak traffic volumes originating from the developed economies, stable yields and higher oil prices. But if oil prices stay 25% above IATA’s forecast, some USD40 billion could be added to the industry fuel bill, using IATA’s own prediction. All other things being equal, this would wipe out the USD9.1 billion in profits expected for the industry this year and create a loss twice as deep as in 2008.

According to IATA’s own jet fuel price calculator, this estimate does not take into account any changes in the quantity of fuel consumed or the impact of hedging. The industry had been expected to transport some 2.54 billion passengers this year, up 5% from last year’s 2.42 billion and 12% from the 2008 figure. That translates into a lot more flying – and therefore higher fuel consumption.

One knee-jerk response to these increases is to insert fuel surcharges, even where this runs the risk of dampening demand.

But pro-active airline fuel-efficiency programmes will also become crucial. With the focus on the key dimension of price (eg, the price of jet fuel, or hedging), little attention is paid to the other dimension of fuel cost, namely volume.

A lot more can be done about fuel volume consumption

Significant differences exist in fuel volume consumption by airlines, reflecting fleet ages, average seating densities, weight-saving strategies and other efficiency measures. Long-haul low-cost AirAsia X’s CEO, Azran Osman-Rani, believes there are considerable competitive advantages to be gained by focussing on fuel volume “where we can get to 40%-50% lower than other airlines in terms of litre/seat/100km, or miles per gallon”. If yields do soften, this cost reduction approach will have to dominate. Fuel surcharges will not gain traction.

Unrest in the Middle East could last for months. Typically in such circumstances, the oil price rise is initially generated by nervous stocking-up of fuel reserves, impacting airlines’ cost side of the ledger. As uncertainty merges into greater clarity of outlook, that nervousness should retreat. But if there is a slowdown in business and tourism flows, the danger moves to the revenue side of the ledger.

For the time being, price levels are well below the challenging times of 2008, but events are already forcing strategic changes, over and above mere addition of fuel surcharges.

A “strategic change threshold” is reached when oil prices reach between USD100-120 per barrel. This becomes a tipping point for the industry and, unless stabilised, will progressively force more changes in the way airlines operate. Up to a certain level, incremental fuel price changes can be met by similarly incremental pricing adaptation. But as cost profiles of certain routes start to drop below profitability, so airlines begin to review their operating networks, redirecting or reducing capacity and even terminating some routes.

If oil prices remain above USD110, that sort of restructuring will occur. Some of it may actually be healthy and, depending on where prices go next, establish the industry better to face what will inevitably be a difficult year. 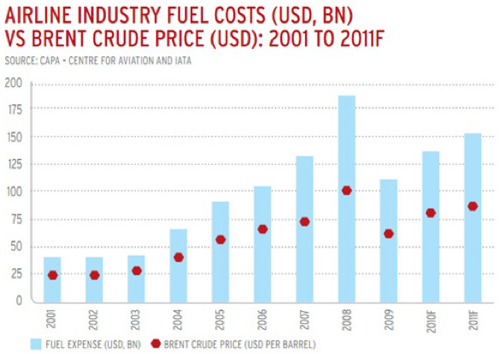