REDjet’s failure to execute a low-cost model in the Caribbean reflects the long-standing realities of governments in the region refusing to fully liberalise to allow any meaningful competition in the market.

The Barbados-based carrier began 2012 with ambitious plans to add up to eight new destinations and end the year with 14 points in its network potentially spanning the Caribbean, northern South America and possibly central America.

But REDjet’s ambitions to establish a true Pan-Caribbean airline vanished less than a year after its launch as the carrier claimed subsidised carriers undercut its fares, which REDjet during the lead-up to its May-2011 debut claimed were 65% lower than what rivals were charging.

Now the carrier seems to be adopting the “if you can’t beat them join them” attitude and has asked for a small part of state assistance that other carriers receive. 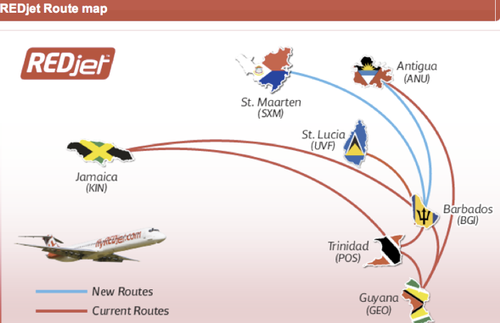 Officials from Trinidad and Tobago have reportedly balked at the request, and even threatened to revoke REDjet’s operating licence. The Government is highly protective of Port of Spain-based Caribbean Airlines, which competed with REDjet on five of its routes.

The behaviour of the Trinidad and Tobago Government is illustrative of REDjet’s challenges in operating a consistent schedule in the Caribbean from its inception, as it struggled to gain requisite approvals to launch flights in the region. Three of four of the carrier’s initial routes – Barbados-Jamaica, Barbados-Trinidad and Trinidad-Jamaica – were launched months after their target commencement date. The introduction of flights from Barbados to Jamaica and Trinidad to Jamaica slipped six months to Nov-2011 while Barbados-Jamaica launched three months behind schedule in August. Most recently the carrier stated it would not be operating the Barbados-St Lucia pairing in May of this year.

Moving targets for new route launches is anathema to any airline business model of running a reliable, on-time operation, but especially for a fledging LCC that pledges to revolutionise travel in a historically difficult operating market. The delay in launching routes also likely altered the time allotted for those markets to mature, inevitably delaying REDjet’s targets in achieving potential profitability.

REDjet’s difficulties in dealing with governments in the region reached a crescendo in November of last year when the carrier threatened to yank its base from Barbados, citing frustration over the Government’s slow approval for its proposed new routes. The actions by Barbados are perplexing since Caribbean Airlines was granted rights to serve St Lucia and Guyana.

MD-80s not optimised for the market

Accompanying REDjet’s troubles in constantly delaying new route launches were aircraft reliability issues. In August and September, it had to cancel flights due to mechanical troubles with its MD-80 aircraft, which also likely created unfavourable customer opinions of the carrier. Its third aircraft did not come online until Dec-2011, which meant it was strapped with two aircraft to handle the cancellations ushered in by mechanical problems.

The MD-80 is also arguably not the optimal aircraft for intra-Caribbean routes. One of REDjet’s major competitors, LIAT, operates its 50-seat Dash 8 300s on flights from Barbados to St Lucia, Guyana and Antigua versus REDjet’s 149-seat MD-80s. While the costs are spread out over more seats, overall operating costs on REDjet’s 24-year old aircraft were likely much higher as the planes burned more fuel.

Caribbean Airlines operates Boeing 737-800s and Dash 8 300s on its flights from Barbados to Port of Spain, Guayana and Kingston, Jamaica. But those flights feed into the carrier’s long-haul destinations to North America, increasing utilisation and load factors. Caribbean is also adding a total of nine 70-seat ATR 72-600s to its fleet to replace three Dash 8 300s and for expansion of intra-regional routes. It also operates two ATR 72-500s.

The Government of Trinidad and Tobago also reportedly subsidises fuel costs for Caribbean Airlines, creating even more hurdles for viable competition in the region. The subsidy has raised the ire of Antiguan carrier LIAT, another government-owned carrier that is struggling with labour unrest and financial instability.

Back to business as usual

Ultimately it seems REDjet’s optimism and ambition caved under the realties of operating in the Caribbean market. The carrier remains hopeful of resuming flights within a timely manner, but the apparent lack of support from the Barbados Government makes a resurgence highly doubtful.

Now it is back to business as usual in the Caribbean – protectionist governments keeping a tight grip on traffic rights in order to protect their loss-making flag carriers.