Qatar Airways’ has revealed Miami as its sixth US destination. This caps off a raft of planned new service by the three big Gulf carriers in 2014 as each airline – Emirates, Etihad and Qatar – works to increase its presence in the North American market. All are working towards feeding more North American traffic through their hubs in Dubai, Abu Dhabi and Doha and onward to points in Asia, Australasia, Africa and Europe.

The rapid expansion by the three Gulf carriers into the Americas during the past couple of years reflects each airline's respective strategy to ensure they serve all the key global markets. That growth is also accompanied by changing dynamics in the global airline business triggered by the rise of the big three as other major airlines throughout the world have softened their attitudes towards Emirates, Etihad and Qatar and forged partnerships with those airlines to optimise the profitability of their networks. Delta and some other US airlines are exceptions, as Delta strongly resists Etihad's expansion into the US, perhaps fearing that US consumers will discover the much higher level of product offered by the Gulf airlines.

Given Qatar’s impending ascension into the oneworld alliance on 31-Oct-2013, Miami is a highly strategic choice given that oneworld anchor American Airlines is the largest carrier at Miami International, accounting for 70% of the seats deployed from the airport.

Miami is American’s third largest hub in terms of seats deployed for the week of 21-Oct-2013 to 27-Oct-2013 behind Dallas/Fort Worth and Chicago O’Hare. 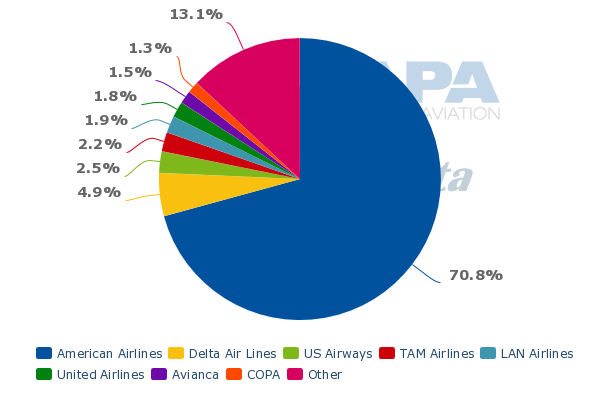 Miami is also the largest US gateway to Latin America as nearly 71% of the airport’s international capacity is operated to Upper South America, the Caribbean and Central America.

With American being both the largest carrier between the United States and Upper South America and Miami’s anchor carrier, the stage appears to be set for Qatar not only to tap American’s domestic network from Miami, but more importantly feed passengers from Asia through Miami to Latin America. 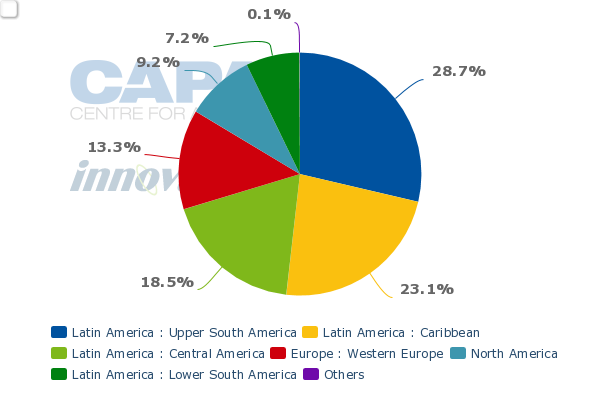 Qatar’s announcement of service to Miami, scheduled to start in Jun-2014 roughly one week before it is slated to formally join oneworld, comes just after American detailed plans to launch service to Hong Kong and Shanghai from its Dallas/Fort Worth hub in Jun-2014, a service that will facilitate connections to Latin America.

For American its own planned service to Hong Kong and Shanghai and Qatar’s plans to introduce service from its Doha hub to Miami could be pillars of its Asia strategy going forward as Delta is building up Seattle as its trans-Pacific gateway and United attempts to optimise its Boeing 787s for service to thinner, secondary routes to Asia.

The potential feed from Asia supplied by Qatar for flights beyond Miami to Latin America is solid as current schedules in Innovata (21-Oct-2013 to 27-Oct-2013) show that South Asia and Southeast Asia combined account for about 29% of Qatar’s seat capacity deployment. For Emirates those regions represent approximately 27% of its seat share and nearly 32% for Etihad.

American’s partnership with Qatar in Miami, coupled with its own push into Asia from Dallas should improve its competitive positioning in Asia and go a long way in maintaining its commanding status as the largest carrier between the US and Latin America. Qatar should reap some benefits as well, as presently it serves Sao Paulo from Doha with continuing service to Buenos Aires (according to current schedules from Innovata). Etihad serves Sao Paulo from Abu Dhabi while Emirates offers a Dubai-Rio de Janeiro-Buenos Aires routing and nonstop service from Dubai to Sao Paulo.

Qatar’s ability to offer service through Miami to American’s extensive network in Latin America and the comprehensive network of LATAM should give Qatar some leverage as it works to capitalise on growing demand from Asia to Latin America.

The traffic flows that Qatar can usher through Miami to Latin America will be watched very closely as an indicator of potential direct service from Asia to Miami, which seems somewhat inevitable given the growing demand between Asia and Latin America.

As Qatar plans to add Miami and Philadelphia to its US route network in 2014 and Los Angeles becomes the fourth US destination in Etihad’s network, Emirates will still hold the lead amongst the three large Gulf carriers in serving the US. In addition to launching new service to Boston in 2014, Emirates in Dec-2013 is upgauging its daily service from Boeing 777-300ERs that have a maximum capacity of 364 seats to 489-seat Airbus A380s.

As it stands Emirates’ more than 20,000 weekly one-way seats deployed to its six US markets are more than double the seats on offer to the US from Etihad and Qatar, and while the service announcements by those two carriers will close the gap, Emirates should hold onto its lead for the foreseeable future.

The market scale that Etihad and Qatar lack in US service in comparison to Emirates is somewhat softened by each carrier’s partnership with American. While American now trails behind United and Delta in terms of full-service carriers, Etihad and Qatar can leverage American’s strong positions at Chicago O’ Hare (where it is second behind United in terms of seats deployed) and New York JFK (where it holds third place behind Delta and JetBlue). Having a relatively strong partner in those hubs allows Etihad and Qatar to access a pool of traffic and an ability to offer a certain level of network breadth to its customers.

As Delta is wedded to SkyTeam and appears to be assuming a more protectionist stance against Gulf carriers, and United is constrained by Star Alliance, American’s attractiveness for Gulf carriers is growing – evidenced by Emirates’ public declarations that it has been courting American for a tie-up.

Shortly after Qatar made that announcement Emirates detailed service to Boston, where it can leverage a codeshare with JetBlue to enhance connections onward from Boston.

It is not clear how the outcome of the litigation surrounding the merger will affect Qatar’s plans for Philadelphia. But Philadelphia could still be viable for Qatar even if the merger is thwarted by the US Government. Even though Philadelphia was not ranked among the top 10 US airports by measure of passenger enplanements for Jan-2013 to Jun-2013, roughly 31 million passengers on average have travelled through the airport on an annual basis since 2009.

Qatar already serves New York City (which is roughly 189km from Philadelphia) from Doha, so it might seem somewhat redundant to have two US gateways fairly close together. But if New York is not a final destination, Philadelphia is probably less of a hassle in terms of connecting for passenger opting to travel onwards compared with JFK. US Airways serves all the major domestic metropolitan areas from Philadelphia and also operates service to numerous smaller markets where Qatar could offer its passengers access. Qatar’s planned service to Philadelphia is only a small by-product of what could or could not happen as a result of the outcome of DoJ’s efforts to block the American-US Airways merger.

Qatar’s addition of Miami as its planned sixth US destination is just the latest expansion planned by Gulf carriers to the Americas.

With their ability to offer connections to Asia and bypass less efficient airports in Europe, North American and US airlines will continue to feel some pressure from the encroachment by the new nimble entrants between the US and the Middle East.

US carriers have a substantial edge thanks to their extensive domestic networks and to their controversial exclusivity in US Government contracts – a very handy subsidy – and sometimes powerful frequent flyer programmes. But the Gulf carriers are producing solid load factors on their services to the US. As their networks expand and as corporate contractors and their customers awake to the much higher product levels of the Gulf airlines, they will also make inroads into premium markets as they have elsewhere in the world.

US carriers have recently woken up to the prospective pressure the Gulf carriers could inflict, and seem increasingly inclined to adopting old-school protectionist measure to protect their turf. These old tactics may help delay the inevitable, but probably no more than that.