Qantas, as part of its Investor Day Presentations, stated it would invest AUD4.4 billion (USD4 billion) over the next two years (including AUD1.7 billion in FY2010 and AUD2.7 billion in 2011) as it purchases new aircraft and embarks on a campaign to improve its margins.

The expenditure includes the purchase of 43 new aircraft, including eight A380s, with CFO, Colin Storrie, stating funding for the aircraft is in place until Oct-2010. 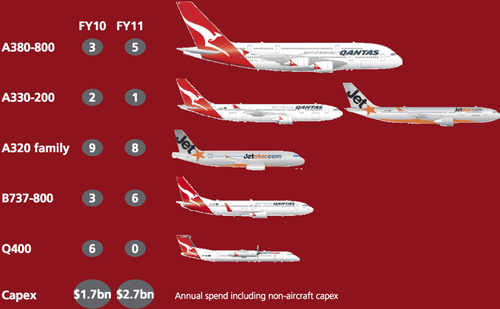 Most notable in the fleet plans for the Group is the drastic reduction in numbers of B787s which are now stated to be on order. From the 65 firm orders and another 50 options and purchase orders made three years ago, Qantas is now projecting only 25 orders and 25 purchase orders.* Meanwhile, Boeing's site still lists Qantas' order as being for 50 "orders". In Jun-2009, Qantas announced that it had agreed with Boeing on the deferral of numerous delivery times, as well as cancelling 15 orders, implying that there were still 50 orders in place. [*Correction: Qantas advises that the following chart, contained in its Investor Presentation, should in fact reflect the fact that there are 50 firm orders for the B787, not 25 firm and 25 purchase options, as illustrated.
*Further Clarification: The following chart relates only to Qantas Airline and not to Group orders. In addition to these numbers, Jetstar has a similar 25 orders and 25 rights to purchase]

The B787 was originally intended to be the cornerstone aircraft for Jetstar's long haul international operations, but the LCC has now concentrated on acquiring A330s, a type which has become the main beneficiary of the large number of B787 delays. 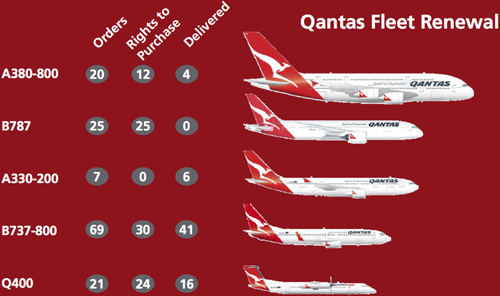 The carrier also advised its investors of the following key priorities to improve its financial standing:

However, yields (both domestic and international) remain weak, with Qantas CEO, Alan Joyce, earlier this month stating the carrier is “not seeing an improvement in business traffic”, with yields “still depressed internationally”, and down by approximately 20% year-on-year at present.

Mr Joyce added that lower yields would ''take some time to wash out of the system” as the carrier still has “a lot of cheap air fares in our inventory”. 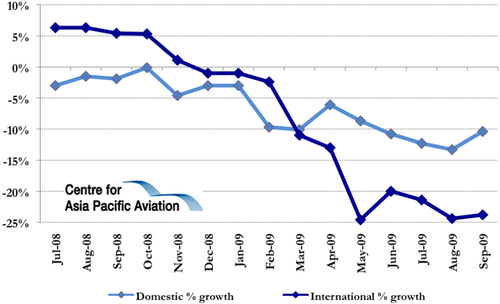 Accordingly, the carrier is considering reducing the proportion of Premium seats on its aircraft operating internationally and consequently increasing the number of Economy seats, following similar configurations on Emirates and Singapore Airlines.

An announcement on the changes is expected by the end of Dec-2009 but the carrier, in the Investor Day Presentation, stated reconfigurations would focus on a “retention of First cabins on key markets” and “right sizing First and Business cabins to demand”.

On a more positive note, Mr Joyce stated he was confident Premium demand would return eventually. He also stated leisure demand is improving, enabling the carrier to increase its domestic air fares, with load factors also remaining strong, currently at an average of 84%.

Qantas capacity and seat load factors vs other carriers: Apr-2009 to Aug-2009 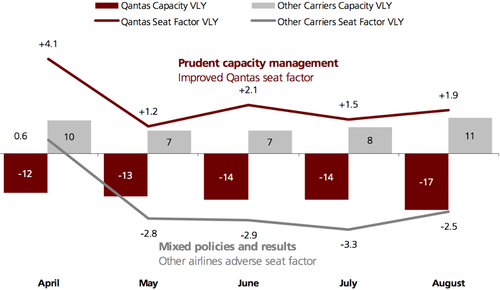 From a cost perspective, Qantas is undertaking its most ambitious savings programme (entitled ‘Q Future’) since 2005, seeking to reduce costs by AUD1.5 billion within three years across 33 initiatives.

As part of this, Qantas, on 11-Nov-2009, announced plans to overhaul its domestic airport check-in in 2010, through its "Airport of the Future" initiative, which is expected to halve check-in times for customers at CityFlyer ports across Australia.

The carrier plans to embed Frequent Flyers’ cards with an intelligent chip, transforming them into personal boarding passes linked to permanent bag tags. This will enable passengers to swipe their Frequent Flyer card on a reader and head to a simplified baggage drop, or straight through the security process to their departure gate.

The AUD200 million programme has been developed in conjunction with IBM and while it will involve significant up-front capital expenditure, the carrier expects to “achieve long-term growth at lower cost, while delivering better service,” according to Mr Joyce.

The carrier, meanwhile, dismissed rumours that it may consider resuming merger talks with British Airways , saying that consolidation is not on the carrier’s agenda.

However, Jetstar has offered to advise Japan Airlines on establishing a LCC, as it attempts to keep the struggling Japanese airline in the oneworld alliance. See related article: Qantas offers to help JAL with LCC subsidiary, as part of oneworld strategy to keep JAL in alliance