There's no room to stand still in the airline business. Qantas CEO Alan Joyce's often controversial measures during a turbulent four years are being vindicated. His aggressive transformation of Qantas appears now to be showing remarkable dividends, with the prospect of going from a billion dollar loss in 2014 to a billion dollar profit just a year on. Next on the agenda will be growth.

Qantas International has returned to profitability for the first time since the global financial crisis (GFC); this is partially due to depreciation gains following large write-downs in FY2014, but there is a fundamental redirection too. Qantas Domestic has bounced back now that the domestic capacity war is over and with room for further improvement. Jetstar has returned to profit but is still under-performing compared to previous years, again with more upside.

Lower fuel costs will deliver Qantas a minimum AUD500 million benefit, setting the group up for a full-year profit around AUD1 billion. The fuel tailwind is an added bonus. Even without it, there are structural changes that will continue to flow through irrespective of that windfall. "Today we can see a bright future," Mr Joyce says.

Yet that proclamation means Qantas must address calls for it to return to growth now that its dark days of restructuring are, if not all behind it, at least nearing fruition. Initially growth is expected to be mostly in the international market as the relatively mature domestic market may be challenged by weak consumer sentiment. For the longer term international growth must be the goal; this will hinge on the synergies Qantas can gain with its key international partners, and if Qantas is successful in lobbying for a slowdown in foreign carrier growth.

CEO Alan Joyce downplays the need for growth, but moves are expected

Qantas growth opportunities in recent years have been in three areas. The first – Jetstar – has not been popular with the legacy establishment that does not like the low-cost unit growing instead of the traditional "Flying Kangaroo". Paradoxically, that same legacy establishment has resisted much of the change that would enable mainline growth. Disruption does not come easily in an industry where inertia rules.

At the Qantas-branded units, international has been shrinking during its restructure with management stating growth will not occur until Qantas International is profitable. The return to profit for Qantas International, its first positive result since the GFC, has been met impatiently with questions about when the unit will begin to grow again. International is still some time from sustainable returns (its initial profit was helped by changes in depreciation, but was still a major reversal) and Mr Joyce said it was not just profits that determine growth but also paying down debt (in hopes of securing back an investment grade rating); and that potential new aircraft “have to be brought in under the right conditions” – i.e. labour.

CFO Gareth Evans downplayed any immediate shopping expedition, again stressing the flexibility Qantas has managed to negotiate into its order book, such as with 787-9s. However, Qantas' options for 787-9s to be delivered in 2017 expire this year, so the bet is on Qantas actioning some aircraft later in the year.

Growth is likely to Santiago following an expanded air service agreement between Australia and Chile; also some growth to China if Qantas' proposed JV with China Eastern is approved.

North America is a strong and strengthening market, where Qantas is well positioned with its Dallas operation linking nicely into its partner American Airlines' network.

Japan capacity has recently been increased, supported by another longstanding partner, JAL, and European growth could occur depending on the relationship with Emirates, assuming regulatory approval for extension is granted.

In brief, Qantas is unlikely to grow international where it does not have partner support, a strategy that most long-haul airlines are today locked into.

The second Qantas-branded unit, Domestic, has shown no shortage of growth – spectacular growth that had proven antagonistic to profits. Qantas sought to maintain market share as a regenerated Virgin Australia chafed to have a larger position. This over-capacity dragged profits down. While the capacity heat is cooling, further sizeable growth is unlikely due to past expansion and the current uncertain economy in Australia.

Mr Joyce sought to convey Qantas has been investing in its business with new products in the air (such as A330 and 747 refurbishment) and ground (new lounges). Mr Joyce argued Qantas will be remembered for restructuring at the same time as improving the passenger experience. There is some truth to this, but the reality is that Qantas had accumulated so much fat over the past two decades that it was easy to trim while also making improvements, some of them long overdue (such as direct aisle access business class seating). Other airlines that have restructured or are currently restructuring have been in more desperate scenarios.

Domestic performance is back but with work to do. International the out-performer, Jetstar the under-performer

Most of the FY2015 comparisons have been to FY2014, an abnormal year for Qantas with weak performance due to a number of factors. Taking a larger view provides a more historical comparison of where Qantas is, not just in comparison to a bad year, but also to some good previous years.

The graph below includes the domestic/international breakdown since FY2012 as well as the combined result since FY2011. These results are for the first half. 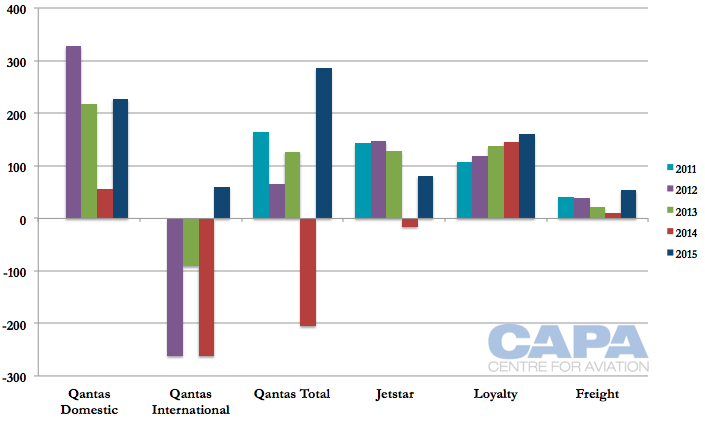 Although Qantas Domestic may have work to do, the reversal of International's fortunes means the combined Domestic/International result (Qantas Total, above) is at a five-year high. Further improvement in each segment should see this grow.

Besides Qantas International, the other only group segment unprofitable in 1H2014 was Jetstar. This became profit in 1H2015, meaning all of the group's segments were profitable at the EBIT level. Jetstar's result however was down from previous years whereas Qantas Domestic was down from the first half of FY2012 but up from the first half of FY2013. The Jetstar segment is comprised of Australian-based domestic and international units as well as foreign-based units, the latter dragging down the result.

Loyalty continues to thunder along

To little surprise Loyalty continued its upward march and had the highest EBIT after Qantas Domestic. However, Loyalty is dependent on the passenger segments, which contribute revenue to Loyalty. Loyalty signed up over 400,000 members in 1H2015, or about 2,200 a day, quite remarkable, given the already near-saturation of the market.

The programme has about 10.5 million members – about half of Australia's population (although there are international members). Virgin Australia has also been focusing on loyalty and increased membership sign-up.

The only two individual segments (excluding the combined Qantas Domestic/International result) to achieve a higher return in 1H2015 than any other in the past five years (based on normalised earnings) were non-flying divisions, Loyalty one of them.

The other was the much smaller Freight division. Freight is an area of interest for Virgin Australia, which has mostly outsourced its freight capacity. Air New Zealand, while not a direct comparison, also managed improved freight performance in the first half.

Qantas will book at least an AUD500 million fuel benefit

Qantas is not providing as clear a picture of its fuel benefit gains as did Air New Zealand, but Qantas has said its FY2015 fuel bill will be no more than AUD4 billion. This will be at least AUD500 million less than FY2014's fuel bill.

CFO Gareth Evans says the group is largely priced for Mar-2015 and beginning to lock down Apr-2015 pricing. Mr Evans described the group as having "lots of participation" in hedging, but that if fuel prices go down the group will conduct further hedging.

Mr Evans described the group's hedging philosophy as being designed to "protect the business against adverse spikes while allowing the business to participate in favourable movements". Mr Evans declined to specify a potential fuel gain in FY2016 despite Air New Zealand doing so. As CAPA previously wrote:

Domestic performance is boosted now that the capacity battle is over

The heart and soul of Qantas is the domestic market, which had delivered excellent returns until a capacity war between Qantas and Virgin. 1H2015 ASKs were down 1.5%, leading to a drop in overall revenue increase in RASK of 2.5%, according to Qantas. Qantas gives an adjusted unit cost improvement figure of 4.1%. 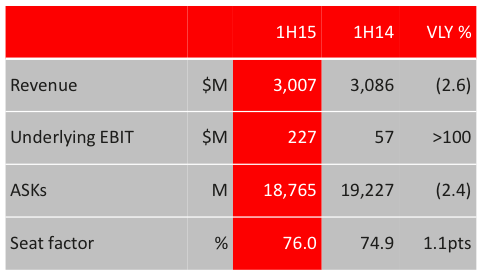 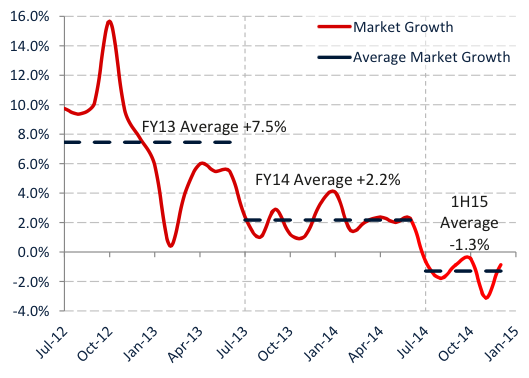 Whereas Qantas Domestic's capacity and revenues decreased, Qantas International's ASKs decreased 0.9% but revenue increased 4.8%. Qantas has not provided an adjusted yield figure but, based on the metrics provided, RASK grew 5.8% while yield grew 3.8%.

These figures can be influenced by multiple factors, such as stage length (a shorter trans-Tasman service or long-haul flight) as well as increased aircraft utilisation that lowers cost and thereby allows a lower yield. 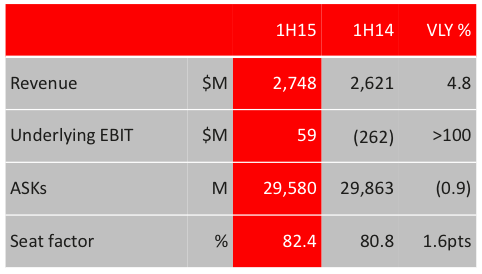 Qantas is now adding capacity through improving fleet utilisation, bringing down costs. The carrier says it is only conducting "capacity growth for very good reason". This includes reducing the ground time of a London service, enabling A380 deployment to Sydney (when combined with taking an A380 off the Sydney-Hong Kong route). Los Angeles ground time, which is less flexible, is being used for greater maintenance work, decreasing ground time in Australia.

The graph below shows Qantas in previous times having lesser monthly variation (from annual average) than Air New Zealand and Virgin; observe the higher spikes of other carriers compared to Qantas each month hovering around +/-5% of its annual average. Qantas International right-sizing: as of 28-Aug-2014 Jetstar has been weighed down by Asian units

Jetstar Asia was profitable in the second quarter - following substantial capacity reductions by southeast Asian LCCs in 2014 - while losses narrowed at Jetstar Japan, partially due to increased utilisation. 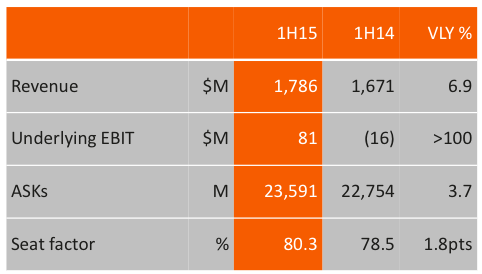 Outlook: a stronger Qantas but downturn 'will come again'

Qantas is not giving guidance on domestic growth, noting competitors influenced much of the change in 1H2015. Group capacity should be up 1.5-2%. The group is not optimistic about domestic growth given a "mixed" environment.

What Qantas is optimistic about is being back on track, reducing unit costs ex-fuel to put it in shape for not only the current environment but downturns, which Mr Joyce pragmatically said were inevitable: “they will come again”.

Mr Joyce has been hard pressed to convince sceptics that show Qantas can transform itself, but the proof is in the outcome. "This result confirms that we are executing the right plan with discipline and speed," Mr Joyce says. Qantas expects to continue its profitable momentum and see all segments remain profitable for the full year. Qantas is not giving a full-year forecast (to 30-Jun-2015), but an AUD1 billion profit may very well be possible.

Mr Joyce has not been a popular figure during the restructuring, but he was doing the critical work neglected by predecessors and made more pressing in the wake of 2008's global economic turmoil. It was never going to be a popular role, but his path was probably made even more difficult, both from expected and sometimes unexpected sources. So understandably Mr Joyce found it hard to stop smiling during the earnings results. Vindication is on the way. It is a testament to him that he was prepared to be unpopular for so long in the name of a stronger Qantas.

This has implications for a Virgin Australia, now preparing to reap the rewards of its hard yards; but also presents opportunities for Qantas' partners.