The shape of Australian tourism has undergone structural change over the past decade to the detriment of Qantas. In the 1990s and 2000s Qantas dominated a very large Australia-Japan market, made possible due to its cost base being significantly lower than those of Japanese airlines. Qantas accumulated over 11% of revenues from Japan alone.

But as Japanese capacity halved between 2005 and 2013, Chinese capacity tripled and overtook Japan in 2011 as Australia’s largest North Asian market. Qantas’ fortunes have changed: its higher cost base compared to Chinese peers (and limited network) means it has less than a 20% share of the Australia-China market. Qantas today still has more capacity to Japan than China. While there are growth opportunities for Qantas in China, they are limited. Qantas will be overshadowed by Chinese carriers, and Qantas will operate in the shadow of the glory days of the Japan boom.

The context is Australian but the implication is global – and profound: full-service carriers with a lower cost base and the advantage of what will be the world’s largest domestic market can shift the balance of traffic.

Today Japan is a small play for Qantas, with one daily flight to the country while Jetstar operates a few more. This is far from the 1990s tourism boom when Japan accounted for over 11% of Qantas Group’s revenue. So important was Japan that Qantas earned more revenue in Japan alone than the rest of Asia.

Contribution of Japan and non-Japan Asia revenue to the Qantas Group: 1996-2009 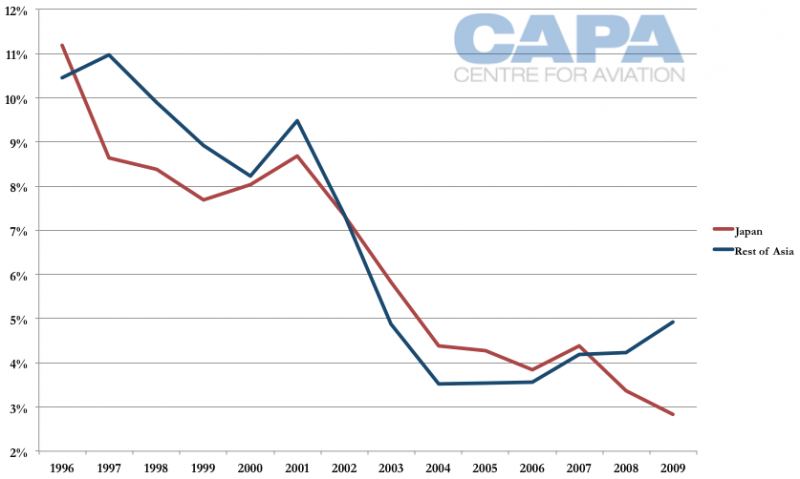 In 2009 the gap in revenue contribution between Japan and non-Asian Japan was the widest in over 10 years. Japan’s revenue contribution in 2009 was under 3%. It is difficult to see Japan in the medium-term having greater importance for Qantas. 2009 was the last year Qantas reported revenue by region.

The Qantas Group in 2009 had nearly the same amount of seat capacity in Japan as in 2001. This is despite Japan in 2009 contributing about 3% of revenue compared to 9% in 2001. The difference is due to Qantas’ growth elsewhere, mainly the domestic market but also North America.

Qantas was the largest carrier between Australia and Japan

The period from 1995 to 1997 was the peak for the Australia-Japan market, both in terms of seat capacity and operators. Ansett and Air New Zealand (with fifth-freedom services) entered the market in 1994. Air New Zealand pulled out in 1997 while Ansett did so after its collapse in 2001. ANA served Australia prior to 1991 but pulled out in 1999. Its footprint was always much smaller than JAL, and ANA had a difficult time as various forces worked against it in aim of protecting Qantas and JAL. The negative experience still lingers. 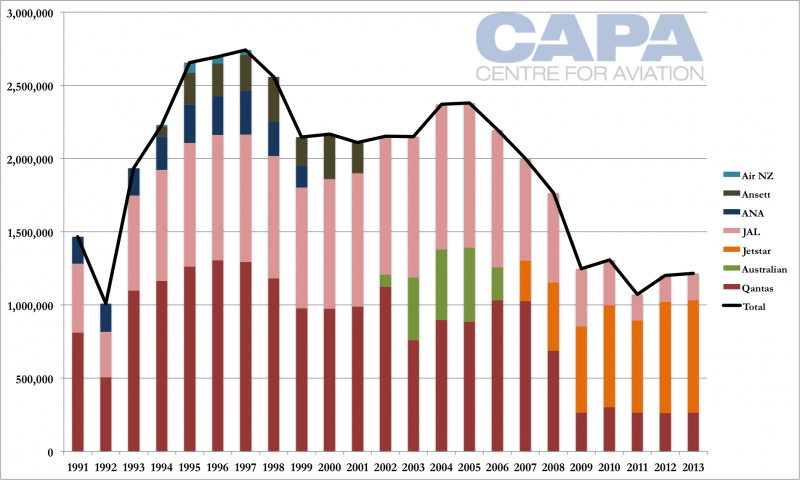 So strong was Qantas’ position that except in 1999, the Qantas Group had more capacity than ANA and JAL combined. 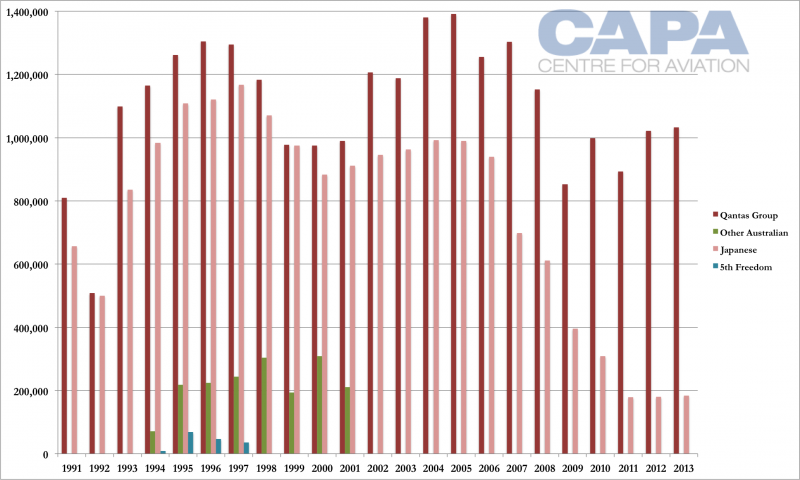 The result is that Qantas’ share of the Australia-Japan market has been about 50% or greater. From 1991 to 1994, and again from 2002 to the present, Qantas Group held a majority. In 2012 and 2013 this even increased to 85%. There will be further growth in Qantas’ favour as Jetstar expands while JAL sees a full-year impact of switching its sole service, Tokyo Narita-Sydney, from the 777-200 to smaller 787-8. 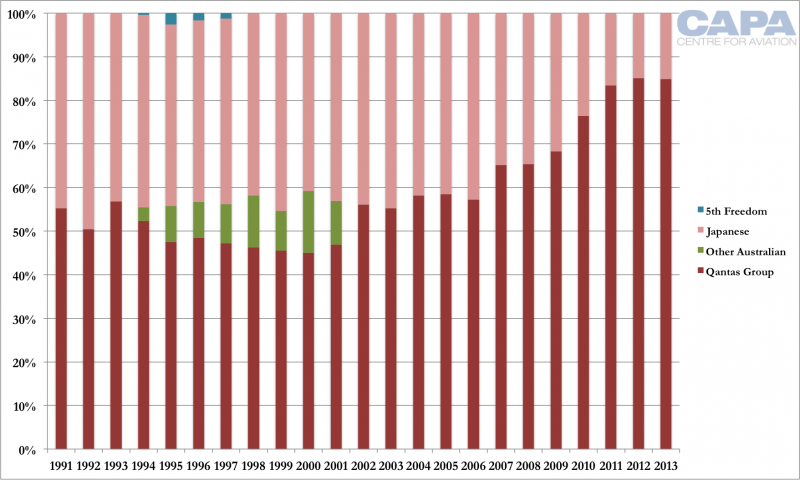 2011 marked the milestone of Australia seeing more capacity to/from China than Japan. Growth has been led by Chinese carriers, especially from 2010 onwards. It took the market nearly 20 years to have one million annual seats between Australia and China, but the second million seats were added in merely three years.

Annual seat capacity from Australia to China and Japan: 1993-2013 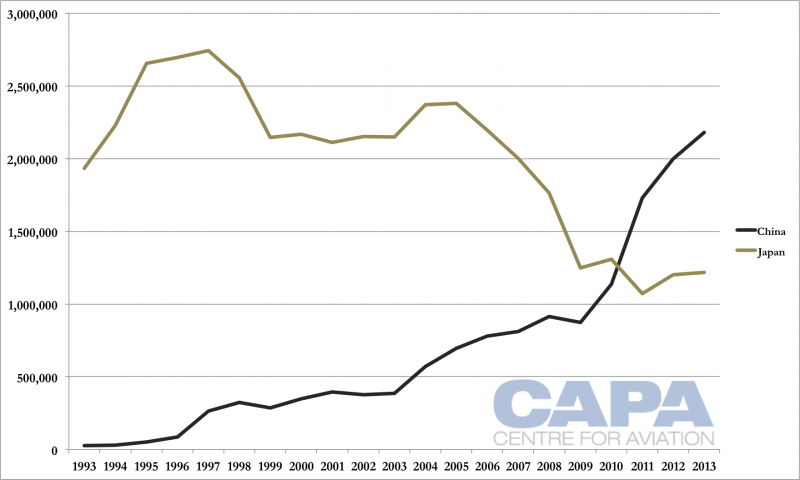 All of this growth has not been to Qantas’ advantage the way Japanese capacity was. After increasing and decreasing capacity for much of the 2000s, by 2010 Qantas had less capacity than each Air China, China Eastern and China Southern. Some gains were made with Jetstar’s Beijing service (via Singapore but classified by Australia as an Australian-China service) but the carrier has since cancelled it.

In 2014 Qantas’ Australia-China capacity will be bigger, but not by much, than Sichuan Airlines – an ambitious carrier many have undoubtedly not heard of or cannot place on a map. 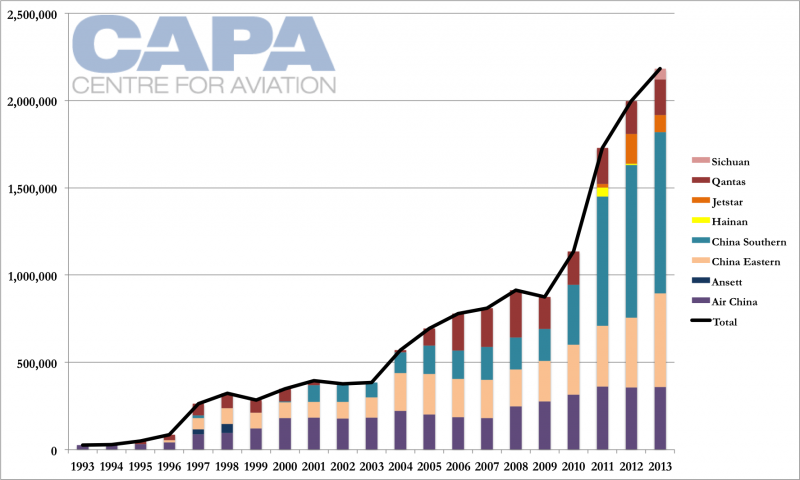 As a result, Qantas’ share of the Chinese market has been less than 30% over the last decade, and more recently under 20%. The short-term will likely see it decrease to 10% as further Chinese capacity is added while Qantas keeps a low presence. 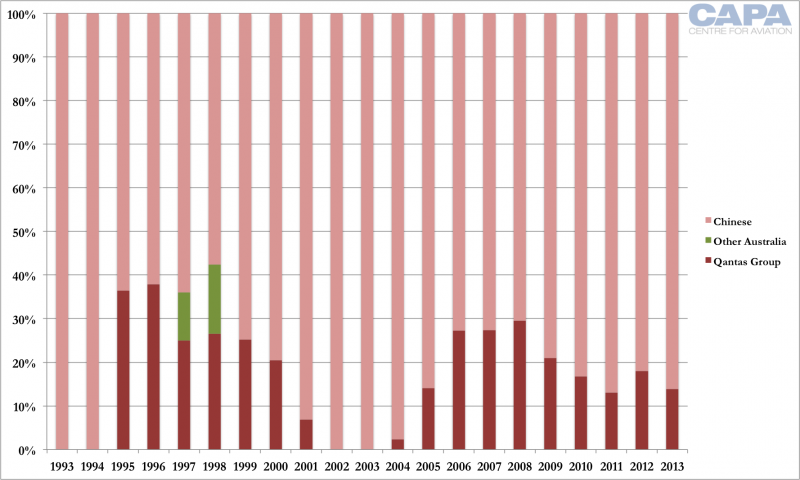 Underpinning why Qantas had and continues to do well in Japan but has limited opportunities in China is reflected in the cost base of each environment. In 2005 Qantas' CASK was about USD5 cents lower than JAL but in 2013 about USD2 cents higher than China Southern. These figures do not take into account average sector length. China Southern is primarily a short-haul operation, which is most cost-intensive than Qantas' more balanced short- and long-haul operations. Adjusting for this would further give China Southern an advantage. As for the future, China Southern is largely inefficient and has yet to undertake a serious cost-cutting programme. When this inevitably occurs, its cost base will be further lowered. 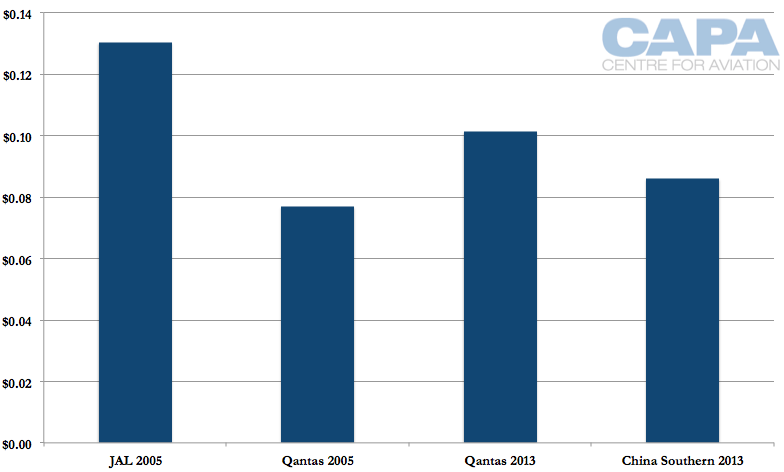 Source: CAPA - Centre for Aviation and companies
Note: All years for each company's fiscal year. Figures are for each year and are not inflation adjusted.

Qantas still larger in Japan than in China despite overall shift 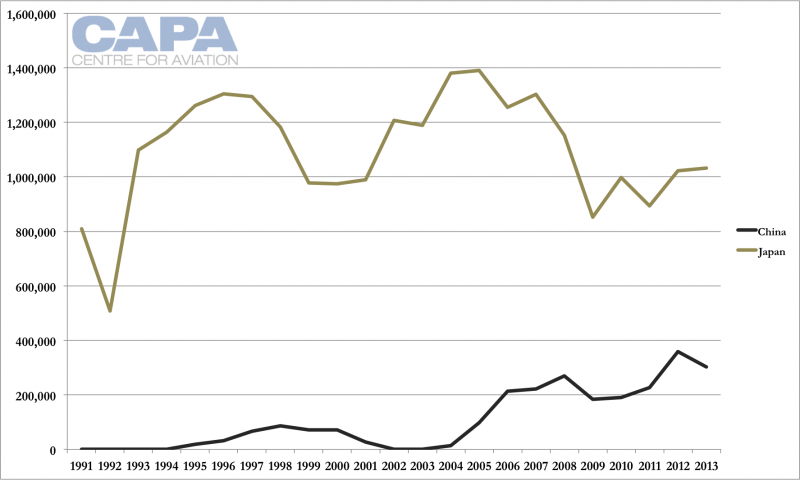 Qantas’ strength in the Japanese market was fuelled by inbound tourism to Australia, with the carrier having said that Japanese tourists visiting Australia accounted for over half of the passengers on its Japanese services. The legacy still continues in popular tourist spots like the Gold Coast, whose shops and restaurants retain Japanese-speaking staff and menus. Elsewhere in Australia, the shift is towards China.

Qantas’ Japanese network spanned multiple cities while its Chinese footprint today remains confined to Shanghai. A Sydney-Beijing service was short-lived. It is unlikely that in the foreseeable future Qantas Group’s historical Japanese footprint of Fukuoka, Nagoya, Osaka, Sapporo and Tokyo will be replaced by the likes of Beijing, Chengdu, Guangzhou, Shanghai and Wuhan.

On its own Qantas could add one or two secondary cities by the end of the decade, and alternatively partnerships with China Eastern and more recently China Southern could lead to opportunities.

But Qantas is unlikely to replicate in China what it achieved in Japan. Qantas had a cost base advantage in Japan while today its competitors, mostly Chinese carriers, have a cost base advantage that will only grow as they become more efficient. And whereas Japan’s confined geography and urbanisation meant a large swathe of the country could be reached via a handful of cities, China’s much larger spread means domestic network access is critical. For domestic access, Chinese carriers have an advantage, even if China Eastern and China Southern carefully give Qantas access.

Chinese carriers can and will dominate markets in the long-term. Already Air China has surpassed United Airlines in the China-United States market. Lufthansa has mulled a joint-venture with Air China while Air France-KLM are looking to expand their partnership (and limited JVs) with China Eastern and China Southern.

But there are still plenty of markets where the modus operandi is to go at it alone. Such an approach may very well work for the coming years, but it does carry an expiration date.