The Australian market has recently started paying close attention to the growth strategies of the country's two largest airline groups, Qantas and Virgin Australia. It has concluded, erroneously, that their domestic growth strategies are perhaps incompatible, since Virgin Australia, buoyed by its move up-market, wants to take grow in its new position but any new capacity will be matched by the Qantas Group, which wants to maintain a profit-optimising 65% market share.

But that view simplifies the complex equation – as well as its implications. To grow, the two must each pursue their present strategy, although that does not mean that for every new flight Virgin puts into the market Qantas will replicate in a tit-for-tat move. Instead the two are largely pursuing low-profile but high-yield markets, stimulating new traffic and also serving regions previously neglected.

Mix, not market share, for Virgin Australia to grow

In the perennial task of pleasing shareholders by increasing profits, Virgin Australia is in the fortunate minority by having a number of ways to do so. First is the traditional, high-capital expenditure method of adding more flights and hoping the market absorbs the capacity. Second, and more limited in application, is changing the revenue mix on existing capacity.

Virgin Australia's low-cost carrier origins meant it was primarily a leisure carrier. It achieved a 10% share of the corporate and government traffic through product changes and investments, such as lounges. Under CEO John Borghetti, who next week marks two years at the helm, Virgin moved up-market, becoming a business carrier with the intent to double its 10% corporate and government share within three years. With the introduction of proper business class, ending Qantas' nearly decade-long monopoly, revitalised lounges, frequent flyer programme and other changes, Virgin can woo this higher-yielding market, thus increasing revenue on existing flights without having to increase capacity. Virgin is successfully achieving its goal; at the last update, in Feb-2012, Virgin reached a 17% share – ahead of schedule. Virgin's proposition – corporate competition – has been met with demand, allowing it to also grow profits the traditional way of increasing the number of flights, particularly on trunk route triangle Brisbane-Melbourne-Sydney flights. 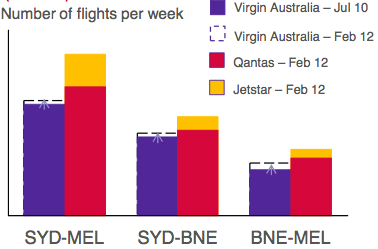 It is not, as Mr Borghetti routinely points out, chasing a specific total market share. "From my perspective, whether we’re at 28% or 32%, that’s really irrelevant. What is relevant is the mix within that market share. It makes a difference in profit output," Mr Borghetti told CAPA earlier this year.

Qantas, however, is largely not afforded these dual opportunities since it is a mature carrier that already has a corporate and government grasp. This scenario is replicated globally, in Europe with easyJet and in North America with JetBlue, Southwest and WestJet, all LCCs that have only in recent years pursued the corporate market. Their full-service and mature counterparts have largely resorted to ancillary revenue, strongest with North American legacy carriers but also, for example, with British Airways, which charges some passengers for long-haul seat selection. (BA may be an exception to a mature carrier that has not significantly grown its corporate market, having done just that in the face of restricted London Heathrow access. But the nuances of London as a global financial hub restrict such opportunities elsewhere.)

Instead Qantas has to add services (as well as ancillary fees and boost its highly profitable frequent flyer division). The company's internal analysis has determined its highest proportion of revenue share is achieved when the group has a 65% market domestically. 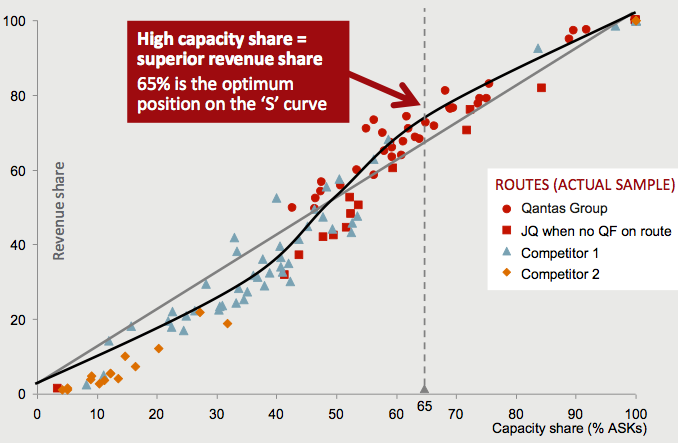 The carrier has found, as shown in the graph above using an actual sample, its return its disproportionately highest (the peak on the s-curve) when it accounts for 65% of capacity in the market, hence its intent to add capacity when others do so it can maintain its share.

This focus on maintaing a 65% share has been referred to as a line in the sand, and Qantas intends to maintain it in coming years.

While some routes will see Qantas respond to Virgin's changes, either through capacity or service level – as has occurred from Melbourne and Sydney to Perth – and that will result in greater fare competition, always of interest to the public. But the two are also seeking new and growing markets, knowing fare undercutting is unsustainable and in neither airline's interest. This lesson, however, was perhaps learned late: Tiger Australia's temporary exit from the market in mid-2011 allowed carriers, notably Jetstar, to raise prices, an upward pressure they found they could partially maintain even when Tiger returned.

Qantas model based on revenue, not margin, giving mixed outlook

Qantas' 65% line in the sand is based on capacity measured against revenue. Missing in the equation is cost, and as a result margin, which tells a different story amongst the carriers. As CAPA reported after the half-annual results season:

The Virgin Australia group's margin (underlying EBIT) climbed 2.2 ppts to 6.4% compared to Qantas Group's 3.4% margin. Virgin Australia's domestic operation had a 6.2% margin while international (including short/medium-haul 737s and long-haul 777s) had a 6.4% margin. Qantas does not breakdown its mainline domestic and international operations, the latter of which is loss-making, but its mainline margin was 1.1%.

In the same period, Jetstar Group achieved a 9.4% margin. In Qantas' sample explaining its 65% strategy, Jetstar-only routes (red square) typically had a disproportionately lower return on revenue than routes (red circle) served by Qantas and Jetstar. (Curiously, there was no information on Qantas-only routes.) While Jetstar brings in less revenue than Qantas, its lower cost base can potentially see it post a disproportionately higher profit, which is why some services (such as those to and from the Gold Coast) have shifted from Qantas mainline to Jetstar. Market share is not reflective of profit or margin.

As Jetstar continues to account for a higher proportion of Qantas Group traffic – in 2H2012 Qantas Group on average will grow 3% while Jetstar will grow 9% domestically – Qantas' 65% model loses relevance to the bottom line.

As Mr Borghetti remarked, "The point to make is it’s not about share. It’s about mix. It’s illogical to say here’s the figure I want and stick to that figure for a decade or 15 years. Market dynamics change and you adjust the model accordingly."

An implication for the Qantas Group is adding capacity where it either cannot be fully absorbed or can be absorbed with only lower yields, a prospect that does not bode well as the domestic market enters a slowdown.

In light of continuing weakness in consumer markets – the latest example came from travel group Jetset, which said it was experiencing weaker performance in traditionally one of its better periods – it is important to identify the areas receiving market growth. Virgin Australia for FY2012 expects 9-11% non-normalised capacity increases (weather disruptions in 2011 depressed capacity) while Jetstar domestic plans growth of 9% and Qantas in the low single digits.

Capacity is upbeat and more positive in smaller markets as well as new markets: Geraldton-Perth cracked the top 55 list in Dec-2011 as the 54th largest route while Brisbane-Gladstone entered in May-2011 and in Dec-2011 was the 32nd largest. (Data from Jan-2012 and Feb-2012, the latest available, offers limited year-on-year comparison owing to flight disruptions following natural disasters in early 2011.)

Virgin Australia is growing its newly-launched regional ATR operation, which includes Brisbane-Gladstone services, while Qantas is also growing its regional QantasLink division. Such services often cater to the mining and resource industry, where additional flights are being targetted. Qantas has announced Sydney-Newman services.

Perth-Port Hedland, a resource base, is seeing growth from Qantas of 50%, although from a medium-sized base. 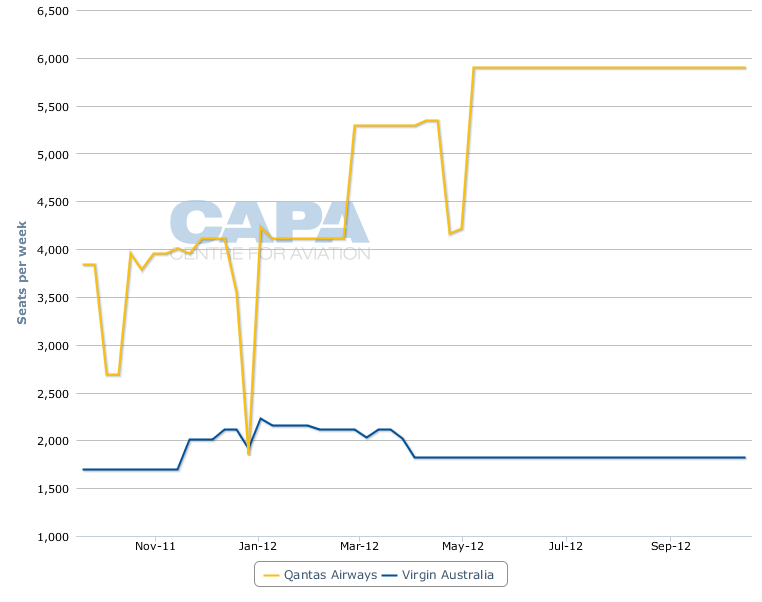 East Coast-West Coast flights, which are trunk routes but also serve the resource industry, are growing in limited circumstances. Sydney-Perth saw large capacity increases this year and is now showing relatively flat capacity. There is notable decrease from Qantas in a sign its response to Virgin last year – which included the high-profile deployment of the 747-400 on the route – was over-aggressive. 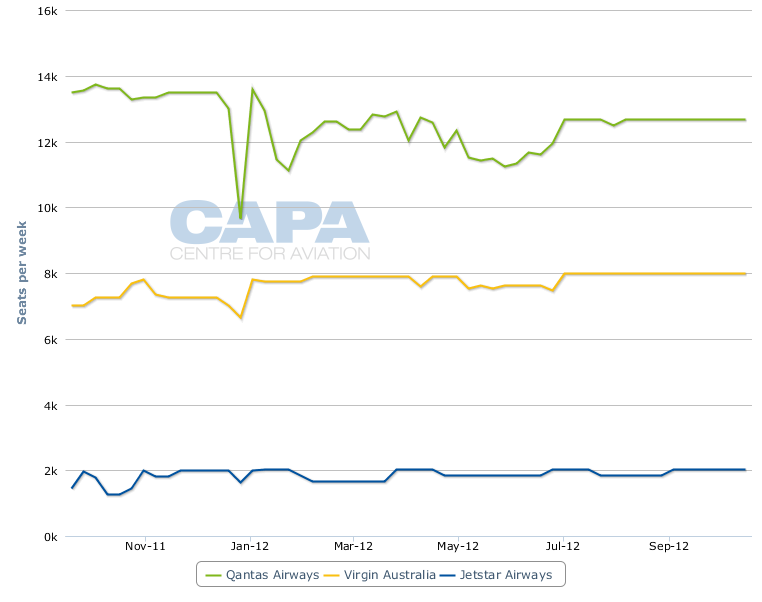 Meanwhile, the Melbourne-Perth market, which was relatively ignored during last year's Sydney-Perth expansion, will see significant growth, primarily from Virgin Australia as additional widebody A330s, delivered in recent weeks, are placed into service on the route. 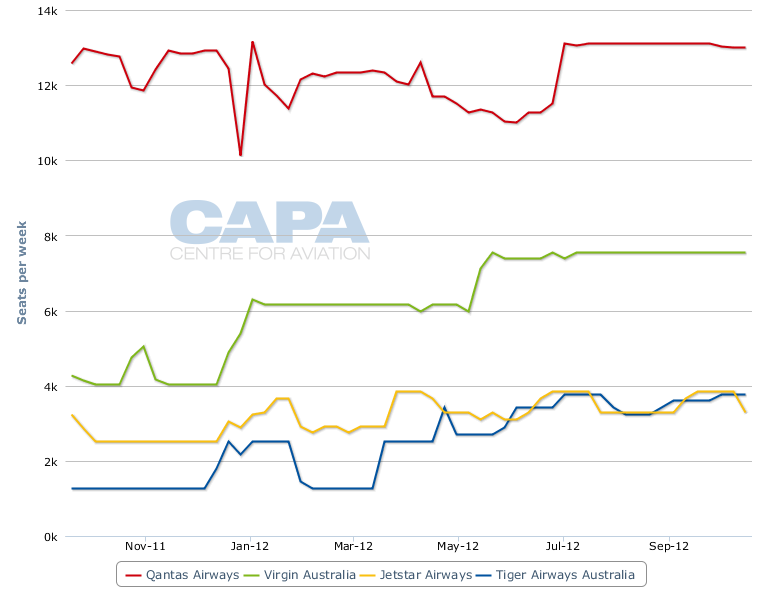 Between Melbourne and Sydney, the country's largest route – and the world's third-largest – there is strong capacity increase from Virgin Australia, associated with its move upmarket. 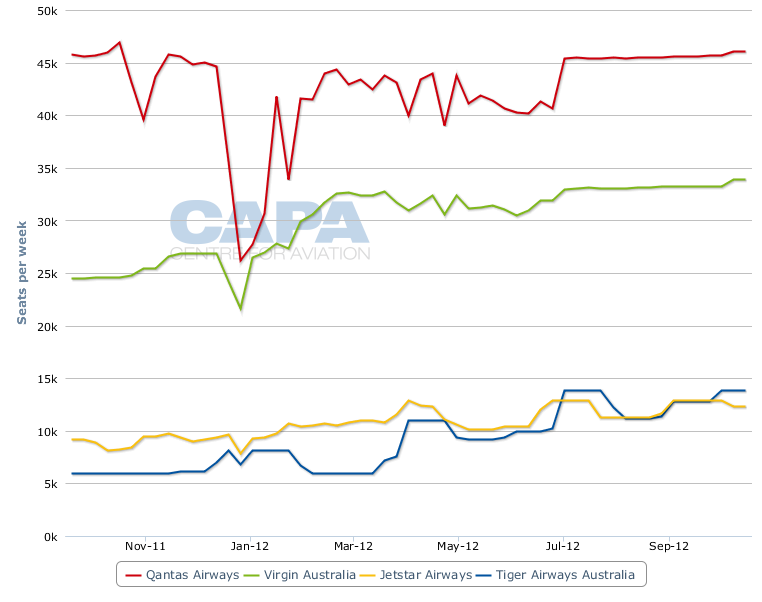 Once again the growth story is stronger in smaller markets, like Melbourne-Hobart, where Jetstar and Virgin Australia are increasing capacity by upwards of 50%. 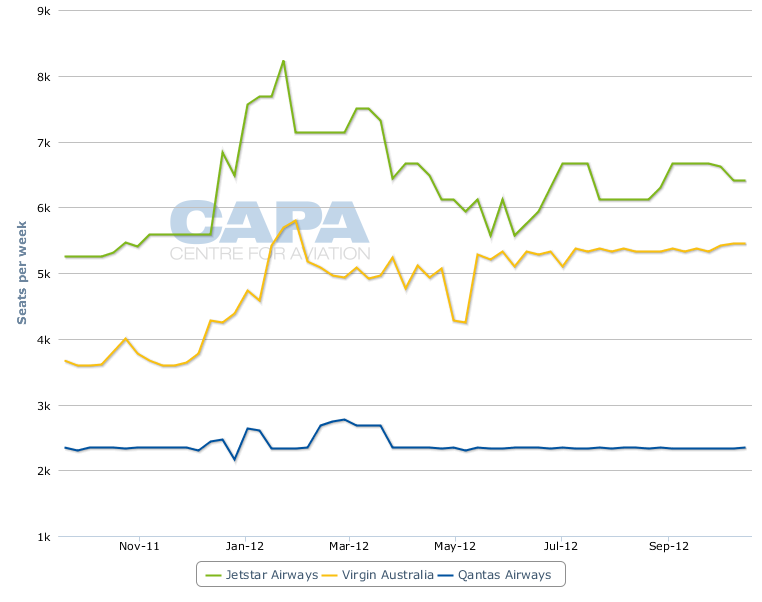 Carriers staying with strategies, but cautious of all-out fare wars

The year's two key themes of increase supply and weakened demand are being met by the two main airline groups and their respective strategies. Virgin Australia's move up-market is allowing it to increase capacity on key trunk routes while the Qantas Group looks to maintain its 65% market share by having Qantas mainline remain relatively flat but push LCC unit Jetstar up in hopes of gaining any lower-margin traffic Virgin drops. This changing Qantas-Jetstar traffic ratio, even if the group maintains a 65% market share, does impact the group's profit. The two are also concentrating on under-served markets that have been subject to high prices, as well as resource flying that offers some of the largest yields.

They are avoiding over-competition and the fare wars that have engulfed other markets, but this is a result of demand still being positive, albeit not as high as it used to be. Should demand shift south, or airlines put in too much growth in FY2013, conditions will weaken. The larger Australian market is uncertain of its direction; this week the Reserve Bank of Australia cut interest rates by 0.5% but banks are so far not passing the full cut on. Further growth projections, to be released when the carriers report annual results in Aug-2012, will indicate if Australia will continue to brave the global economic downturn or if fleet flexibility, which the carriers have routinely pointed out, will be exercised.