Southwest’s highly anticipated entry into the Atlanta market operating under its own brand has not altered advanced fares in the market dramatically even as the carrier pledged that its walk-up business fares would fall 30% below those of dominant carrier Delta Air Lines. In some markets, Southwest and its subsidiary AirTran are charging higher business fares than their larger rival while economy fares charged by the low-fare carriers are only marginally cheaper.

But Southwest appears willing to undercut Delta at the last minute on some fares, as Delta recently attributed a miss in its May unit revenue projections to competitor fare actions during the second half of the month. Delta’s unit revenues grew 6% year-over-year during May-2012, a single percentage point miss from the 7% guidance the carrier had previously provided. Many US carriers have warned of weaker year-over-year revenue comparisons in May-2012, due to the major increases recorded in 2011 off a weaker base in the year prior.

Delta did not mention Southwest directly in outlining competitive fare actions, but the Associated Press quoted JP Morgan analysts who remarked that Southwest on 17-May-2012 filed fare adjustments on more than 200 routes, of which 46 were from Atlanta.

With the exception of Austin, all of the markets are also served by Southwest’s AirTran subsidiary. Southwest officially closed on its acquisition of AirTran in May-2011, and had time to both study the competitive landscape and make decisions regarding AirTran’s Atlanta operations before its market entry.

Access to Atlanta was one of the key factors in Southwest’s decision to acquire AirTran. Southwest long ago abandoned its strategy of serving secondary airports and has entered large US metropolitan markets in order to continue its growth. Based on US government and Southwest’s own data, with its entry into Atlanta Southwest now has a presence in nine of the top 10 US markets with respect to enplaned passengers (it serves Chicago through Midway, Houston through Hobby and offers flights from both bay area airports Oakland and San Francisco). The carrier also positioned itself during the last couple of years to obtain slots at New York LaGuardia and Newark Liberty International airports to gain key access to the New York metropolitan area, after having a limited presence in the region for many years through its Long Island Islip flights, which is 72km from LaGuardia. 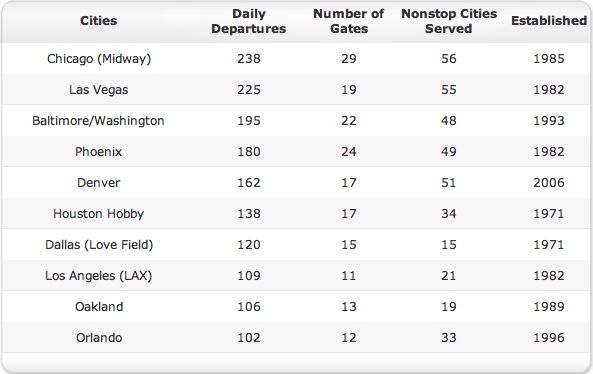 Through numerous public statements Delta has expressed little concern over Southwest’s entry into Atlanta after competing with low-fare rival AirTran for many years at the airport. In fact, early in 2012 Delta EVP network planning, revenue management and marketing Glen Hauenstein remarked that Southwest has been less aggressive in discounting prices in Atlanta than AirTran. Southwest’s moves in May-2012 could be an indication that Delta might see more assertive pricing behaivour from Southwest in the future as the carrier settles into the Atlanta market.

Southwest serves its largest markets from Atlanta, but does not flood the market with capacity

Southwest is serving seven of its top 10 markets from Atlanta. In Feb-2012 it launched 15 non-stop flights, offering two daily flights to both Austin and Denver, three to Houston and four each to Baltimore and Chicago. During Mar-2012 Southwest introduced two daily flights each to Las Vegas and Phoenix and on 10 Jun-2012 inaugurated a single daily non-stop flight from Atlanta to Las Angeles. 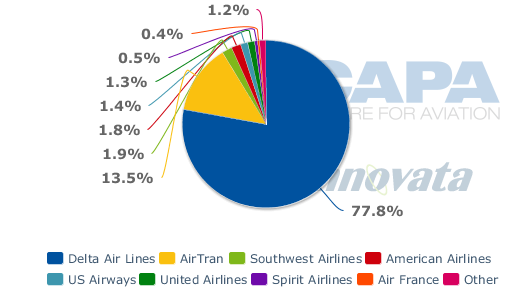 With a maximum of four daily flights in any of the markets it serves from Atlanta, Southwest is maintaining a relatively small presence on its new routes. It is offering the largest number of one-way weekly seats – 4795 – to Midway, where it offers four daily services. The carrier’s second largest market from Atlanta is Baltimore, where it also offers four daily flights that account for 4606 weekly one-way seats. The only markets where Southwest has a greater seat share than its AirTran subsidiary is Houston Hobby, where Southwest now accounts for 33% of the seats from Atlanta compared with 32% for AirTran, and Phoenix, where Southwest enjoys a 13% share compared with AirTran's 7%. The carriers offer close to the same number of seats from Atlanta to Baltimore, and each airline holds a roughly 20% seat share.

Aside from its pricing actions during the latter half of May-2012, Southwest appears to be acting rationally in terms of fares for both economy and business class tickets. While Southwest CEO Gary Kelly has previously declared that Southwest’s fully-refundable, walk-up fares would be an average of 30% lower than what is currently charged in the markets the carrier serves from Atlanta, Southwest’s business fares in many of those markets for travel 26-Jun-2012 through 28-Jun-2012 on non-stop flights are actually higher than Delta’s fares.

Delta’s lowest economy fares from non-stop travel from Atlanta for travel 10-Jul-2012 to 12-Jul-2012 are higher on flights to Austin, Midway, Denver, Hobby, Las Vegas, Phoenix and Los Angeles, but not by a terribly wide margin. The largest gap is a USD40 difference on Delta’s flights to Las Vegas, followed by USD30 difference on Delta and Southwest’s flights to Phoenix. In that market US Airways’ USD287 economy fare is lower than prices charged by Delta, AirTran and Southwest. In Austin, Denver and Hobby, Delta’s fares are USD26 higher than Southwest, and USD22 higher on flights to Midway and Los Angeles.

Delta might have adjusted some of its advanced business fares after Southwest’s last minute price cuts last month in order to stay ahead of its rival’s pricing actions. Southwest’s moves seem to be the carrier’s first lob in fare adjustments to gauge Delta’s competitive response. If history is any indication, Delta will aggressively lower its fares to compete against Southwest and ensure its customer base remains at its current levels.