Berlin Brandenburg Airport’s announcement that it will not open its EUR2.5 billion new premises as scheduled on 03-Jun-2012 is leading to major operational challenges for all involved, but in particular Lufthansa and Air Berlin which would be the largest operators at the new airport and had planned significant network expansions and new procedures. The delay, which is expected to be several months long, is above all bad news for Air Berlin which had aimed to cement its new strategic positioning as full service network carrier and oneworld member with the opening of the German capital’s new airport.

Low-cost carriers will be the least affected as their drive for low airport costs exceeds the need for enlarged and architectural attractive airport capacity. LCCs also remain outside the public relations contest to participate in the opening of Germany’s prestigious capital airport.

Berlin Brandenburg was scheduled to handle close to 700,000 seats – as much as New York Newark Liberty International Airport – and 4490 weekly frequencies in its first week of operations. This would have included the combined activity of the present two Berlin airports, Berlin Tegel and Berlin Schönefeld, as well as new capacity with incumbent carriers upping frequencies or launching new destinations and new airlines commencing services. In a recent statement, the Berlin airports operator boasted that “75 airlines will be taking off from the newly-opened Berlin Brandenburg Airport for 173 destinations in 50 countries. There have never been as many summer destinations in Berlin's summer flight plan”.

Berlin Brandenburg planned capacity (seats per week) over the next 6 months: prior to delay announcement 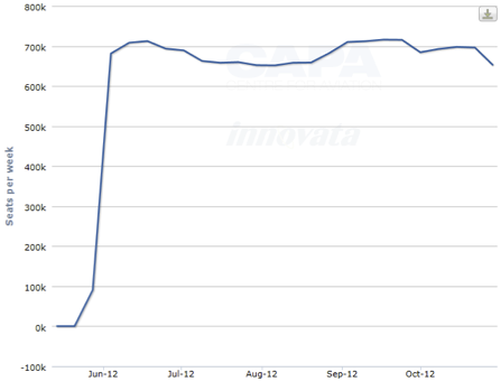 On Berlin Brandenburg’s list of newcomers are the UK no-frills operator Jet2.com with a route to Leeds, Star Alliance member TAP Air Portugal with a route to Lisbon, Vueling with routes to Barcelona and Bilbao and Wowair to Reykjavik. Condor, Hainan Airlines and easyJet committed to increasing frequencies on existing routes while Air France extended its summer schedule to Berlin with Marseilles and Toulouse and Norwegian Air Shuttle with Aalborg, Torp and Trondheim. Germanwings will launch flights to Rijeka in Croatia and Air Berlin is integrating Los Angeles, Windhoek, Danzig, Krakow, Windhoek and Kaliningrad in its Berlin hub. Some of these network growths have already happened, but most were due to take place after the inauguration of the new airport.

Lufthansa, keen on making a mark as the country’s largest airline in the country’s new capital airport – and to combat the enthusiasm Air Berlin was planning on for its new hub – planned a considerable 40% increase in seat capacity and 30 new destinations on 03-Jun-2012. Germany’s largest airline is investing EUR60 million in boosting its presence at Berlin and will up the number of A320 family aircraft based at the airport from nine to 15 to support 30 new destinations. The number of flight movements will increase by 35% to 1000 take-offs and landings per week. Lufthansa had opted for a “big bang” approach for the new capital airport and almost the entire expansion was planned to coincide with the opening of the new premises. 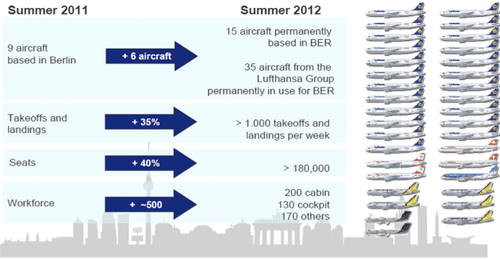 Lufthansa has vowed it will pursue the planned capacity expansion despite the delayed opening and management immediately initiated talks to secure additional temporary slots. Lufthansa told CAPA it believes there is sufficient runway capacity to support the additional flights and it anticipates that the departure times for flights booked over to Tegel Airport will not differ from original schedules by more than 15mins. Initial notifications of the change of airport, from Brandenburg to Tegel, have been loaded in the GDSs as of 11-May-2011 and over 1 million customers are being informed by email, SMS, social media and posting on the Lufthansa website.

Lufthansa refrained from naming a cost estimate, but in an interview with the Berliner Morgenpost Lufthansa Passenger Airlines CEO and board member Carsten Spohr said that ultimately “Brandenburg Airport will receive a large bill”. Employees from other locations might have to help out temporarily in Berlin to rebook passengers and provide support, and “all this costs money. There is no separate insurance for such events. Our insurance is, in this case, Berliner Flughafen GmbH.”

The negative effect on the customer satisfaction will be less tangible to calculate, but will be high. Tegel is already now operating over its terminal design capacity and the additional service expansions from the different carriers will put further strain in the summer peak season. Lufthansa invested considerable sums in service facilities in the new Berlin Brandenburg terminal such as a First Class Lobby and lounges, which will cover an area of more than 1500sqm. There will be no return on this investment for several months.

No Lufthansa long-haul at Berlin except an A380 inaugural flight

Lufthansa will not be deploying a hub strategy at Berlin Brandenburg and its expanded service will not see any long-haul from BER. It will further build its hubs at Frankfurt, Munich and Dusseldorf and focus on short- and medium-haul point-to-point in Berlin. This makes it relatively less exposed to the delayed opening than its German competitor Air Berlin, which operates a real hub at Berlin and its operating waves are more time sensitive.

Long-haul capacity at Tegel currently accounts for less than 8% of total capacity at the airport. From Lufthansa and Star Alliance partners, there is now just one long-haul flight, a daily service by United Continental to Newark. 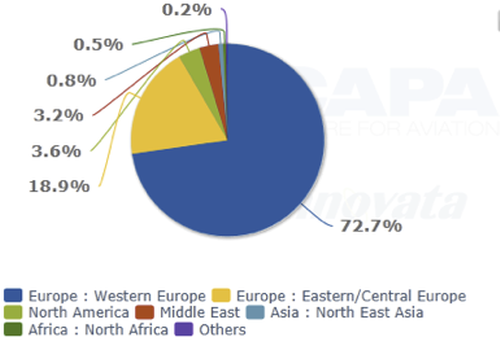 Indicating its commitment to the German capital, Lufthansa had decided to operate the first flight from the new airport with a special A380 service to Frankfurt. The A380, which is to be named Berlin, was fully booked. Not coincidentally the special flight will now operate from Tegel, where it will be christened instead of Berlin Brandenburg, on 22-May-2012.

Lufthansa will remain the second largest carrier at Tegel while it remains open. Even with its planned 40% seat increase taking place on 03-Jun-2012 it still will operate less capacity than Air Berlin. 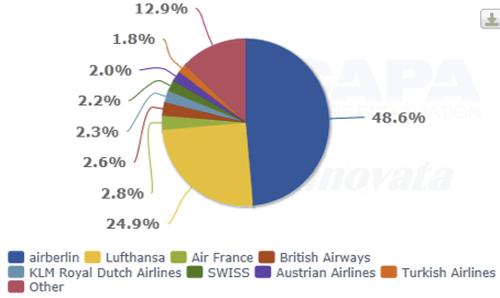 For Air Berlin, the delayed opening of the new infrastructure is a setback. Air Berlin has gravitated away from being a low-cost carrier to a full service carrier, and the move to new, larger and more comfortable premises was a final part of the jigsaw which also included the 29% shareholding of Etihad Airways and full membership in oneworld. The carrier formally joined oneworld in Mar-2012.

Tegel’s dominant carrier had planned all its infrastructural measures and flight schedules for 03-Jun-2012 and said the delayed opening causes a “huge” challenge. “We have to work around the change of plan, which presents us with a huge challenge. It presents immense logistical problems for all involved and will also cause additional costs which have yet to be calculated,” CEO Hartmut Mehdorn said in a statement. He added: “The new airberlin hub is conceived in such a way that airberlin aircraft fly to Berlin from different locations in a system of six traffic waves each day. airberlin passengers are thus able to change planes and continue their flights in a very short time. This system is exactly tailored to the conditions at BER and cannot simply be put into operation at Tegel Airport.”

Air Berlin operates at present at Tegel with a six-wave structure, but the airline’s new scheduling for 03-Jun-2012 was based on Berlin Brandenburg’s opening hours from 05:30 to 23:30 whereas Tegel’s opening hours are limited from 06:00 to 23:00 due to its proximity to the city of Berlin. This leaves Air Berlin with a time gap of one hour and requires a rescheduling of aircraft block times and subsequent coordination of slots. The carrier told CAPA it engaged in talks with all the public authorities and the airport to extend the opening hours of Tegel until the inauguration of Berlin Brandenburg. An additional quandary is the outdated (manual) baggage handling system at Tegel, which does not allow for a quick transfer of baggage for connecting passengers.

The Berlin airports are owned and managed by Flughafen Berlin Brandenburg GmbH (FBB). Shareholders consist of the states of Berlin and Brandenburg, with each holding a 37% share, and the Federal Republic of Germany holding the remaining share of 26%.

Air Berlin set up a task force the day following the announcement of the delayed opening and has started informing over 1 million passengers about the change of airport. The eventual change to the time schedules will be announced once discussions with the authorities on extra slots and extended opening hours are finalised, Air Berlin said.

Air Berlin is pushing to postpone the opening of the new airport to October, which is a quiet period for airlines and would not further dispute the already disrupted summer operations at Berlin Tegel. Like Lufthansa, it vowed to implement the planned 8% capacity increase in Berlin this summer despite the challenges. According to Air Berlin, it currently operates up to 40 aircraft a day at its Berlin hub “which now creates 10,500 connecting flights per week”. The flight schedule has been increased to 1500 departures and arrivals per week, it noted. Air Berlin last year handled 7.9 million passengers at Berlin Tegel.

The cut-over from the present two Berlin airports to the new infrastructure had been scheduled for the night of 02/03-Jun-2012. It was aimed to bring to an end Berlin’s fragmented airport system, which until 2008 comprised Schönefeld, Tegel and Tempelhof, and replace it with an infrastructure reflecting the power of Germany’s capital and of Germany, Europe’s largest and strongest economy.

Folding two airports in one and move them to new premises was never going to be an easy task, but the airport operator was confident it could do it and, moreover, it would do so without the disruptions that marked the opening of Heathrow’s Terminal 5. In line with Germany’s sense for efficiency, trial runs at the new airport started in Nov-2011 and 10,000 volunteers took part in test runs since Feb-2012 trying out the complete passenger process including check-in and baggage handling – using suitcases filled with bricks to make the tests realistic. At the end of April the airport concluded: “All airport procedures – from check-in through security checks to boarding – are being tested during 30-day integrated trials. Berlin Brandenburg Airport has been thoroughly tested.”

The airport has arranged for the highway from Tegel to Berlin Brandenburg to be closed in one direction for several hours on the night of 02/03-Jun-2012, allowing for the overnight move of all equipment including apron equipment, firefighting vehicles, tow tractors and other special vehicles. But on 08-May-2012 it announced that “technical issues concerning fire protection installations make deferral of opening of Berlin Brandenburg Airport necessary”.

While opening of airports always seem to be marred with problems and airlines are always anticipating disruptions, the timing of the disclosure that Berlin Brandenburg Airport will not open on time is quite puzzling and disturbing. With less than a month before the actual launch, airlines and other airport users such as retail outlets were past the planning stage and in the preparation phase. This leaves everybody in a difficult situation, yet airlines are adaptive and as Mr Mehdorn said: “The workload for our employees is enormous. Imagine moving flats twice. We are confident, however, that we will cope with this additional challenge.”

The Flughafen Berlin Brandenburg GmbH board is meeting on 16-May-2012, and undoubtedly some heads will roll.  A new opening date will probably be announced. Let’s hope the airport operator and its political shareholders are realistic and opt for a much quieter period for airlines: winter. 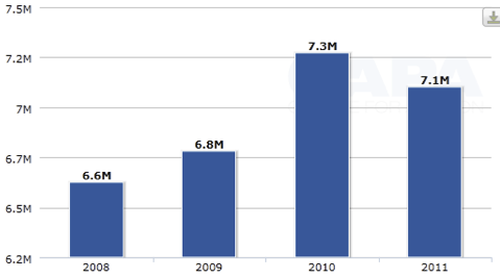 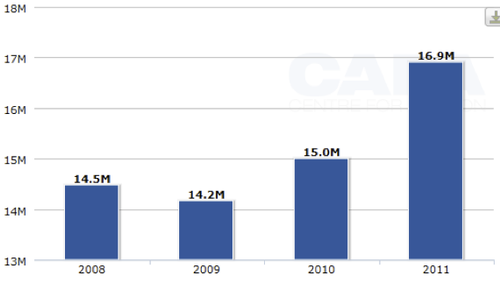