Now that the hype around Porter Airlines’ conditional order for Bombardier CS100 narrowbodies has dimmed, questions are arising about whether the bid to expand its footprint at Billy Bishop Toronto City Centre Airport will succeed, and whether the CSeries will ever make an appearance in Porter’s livery.

Porter opted to outline its plans for the future in Apr-2013 after Air Canada and WestJet spent much of 2012 touting proposed launches of their respective subsidiaries, Air Canada rouge and Encore. rouge is a low-cost carrier operating to trans-Atlantic and eventually to Caribbean leisure destinations, while Encore flies Q400s to Fort St John, Nanaimo with new service to Brandon scheduled to debut in Sep-2013.

Porter is strategically placing its bets on gaining authority to operate the Canadian built 108-seat CS100 from its Toronto City Centre base, which is much closer to downtown than Toronto Pearson, approximately 29km distant. Since its launch of operations from City Centre in 2006 with Bombardier Q400 turboprops, City Centre’s annual passenger movements have jumped from under 200,000 to almost 2 million.

Porter's impact on Billy Bishop Toronto City Centre Airport has been transformational, as shown by a recent report compiled by consultancy Airbiz.

A Porter-WestJet link would make sense....

Porter’s ascension at Toronto City Centre has not been without controversy as Air Canada, after previously quitting the airport, worked its way through the courts to allow it to restart service. This was an attempt to preserve its competitive edge among business travellers drawn to Porter’s refined product that includes all leather seats in a 2x2 layout on its Q400s, and complimentary food and beverages. Porter today operates over 80% of the capacity (seats) at the airport, according to Innovata, with Air Canada's Q400s the only other presence.

Now both Air Canada and WestJet have unsurprisingly made declarations regarding their preference to operate larger jets from the airport, which are banned under current restrictions known as the “Tripartite Agreement”. Porter is pushing for a lifting of the jet ban and its order with Canadian manufacturer Bombardier is contingent on removal of the ban. Porter’s pursuit of jet operations at City Centre will no doubt fuel a new round of controversy as other carriers will fight to ensure they can operate their narrowbody aircraft from the airport.

An article in Canada’s Financial Post, published shortly after Porter’s announcement of its intent to order the CSeries, posited an interesting theory behind the carrier’s actions, citing several industry observers suggesting Porter’s moves were intended to fashion itself as a takeover target, with WestJet the most obvious partner. Acquiring Porter would give Encore (and WestJet) an immediate foothold in Eastern Canada, a region pegged for expansion by Encore as it works to take delivery of the 20 Bombardier Q400s it has on order (seven are scheduled for delivery during 2013). Porter’s CEO Robert Duluce has refuted the speculation that the carrier was positioning itself for a takeover, stressing to the Financial Post its planned expansion was well considered.

The idea of some form of partnership does have a credible ring, as Porter and WestJet have similar customer service mentalities, and gaining such key access to City Centre would allow WestJet to almost instantaneously increase its business passenger base. The carrier, during the last couple of years, has been making a push to broaden its reach in the corporate market by bolstering its frequencies in Canada's Eastern Triangle (heavily travelled corporate markets between Toronto, Montreal and Ottawa), instituting changes to its loyalty and credit card programmes, a marked expansion of its interline and codeshare agreements and most recently the introduction of a premium economy section to anchor new fare bundles also being introduced.

On the other hand, WestJet is still digesting the majority of those changes to its business, so adding the acquisition of another carrier to the list may not be feasible in the immediate future. As Encore made its debut in late Jun-2013, WestJet’s roll-out of premium economy and fare bundles hit ripples, as the Financial Post cited a copy of an internal memo it obtained in which WestJet management admitted that the soft roll-out of premium economy during Spring-2013 was unsurprisingly not snag free.

Flight attendants had reportedly encountered challenges with exit seats being included in the premium economy product with respect to handling priority boarding, and complimentary food and drink, relatively minor issues, well highlighted by the media. Premium economy seating is largely dedicated to the first three rows of WestJet’s Boeing 737s. "We underestimated the impact that the complexity and magnitude of this change," said the airline.

Ironing out its new product attributes in addition to launching a new subsidiary operating a second fleet type may be all WestJet can handle at the moment. And while the carrier has turned a solid financial performance during the last couple of years, attempting to acquire another airline while launching a new carrier is not likely something the carrier’s management is pushing for.

The carrier is in the midst of a CAD100 million (USD96 million) cost improvement programme, so pursuing outside acquisitions runs counter to that strategy. Additionally, WestJet also has a keen focus on culture, and incorporating another carrier into its operations is likely not a high priority as it works to ensure a smooth cultural transition to Encore.

An acquisition of Porter by WestJet would however perhaps only have a limited effect in enlarging WestJet’s stature in either the domestic or transborder market place.

Estimates from Canada’s largest carrier Air Canada issued in Jun-2013 suggest that they and WestJet combined account for about 90% of Canada’s domestic market by revenue. By capacity (seats) the two airlines themselves account for 72% of the domestic market, with Porter at 8%. Porter also similarly has a small presence in the US transborder market. 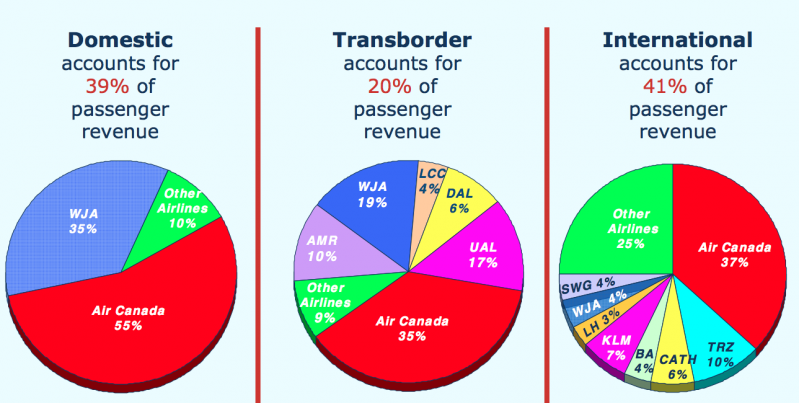 WestJet has hinted that its next major step once Encore is firmly established and, presumably once it irons out wrinkles with its new product enhancements, would be a consideration of widebody operations – which seems logical given that long-haul flights would be key creating a step-change in its revenue generation over the long term.

There have in the past been close parallels between WestJet and Australia's Virgin Blue (now Virgin Australia); former CEO and founder of Virgin Blue remains a board member of WestJet. The respective domestic markets are in many ways similar and, in 2001 Virgin Blue became the sole competitor with flag carrier Qantas in its home market, paralleling WestJet's position.

Like WestJet, Virgin has steadily climbed the hybridity scale, also adopting the Sabre GDS system and has today gone further, taking on all the trappings of a full-service carrier, with regional jet operations, widebody aircraft and international services, business class seating, executive lounges, FFP etc. An indication of how far the renamed Virgin Australia has evolved is suggested by its recent purchase of a controlling stake in domestic LCC Tigerair Australia, to allow it to compete more effectively with Qantas' low-cost subsidiary Jetstar (a vehicle that Air Canada's labour force would not permit).

Virgin's expansion has been both organic and partnership/purchase-driven. No doubt the question of a WestJet purchase or other partnership with Porter has been mooted, as the emerging LCC spreads its wings more widely in the home market; and the Toronto City Centre Airport's high yielding market is undoubtedly attractive – the more so, as Air Canada establishes a position there.

Porter, meanwhile, continues to push for the lifting of the jet ban at City Centre and the lengthening of the main runway at the airport by 168m on each end, in its quest to elevate its profile in the Canadian market place through expansion with narrowbody aircraft. It is important for the carrier to maintain its large majority position at the airport, while entrenching its broader position in the domestic and transborder markets.

By implicitly linking the request to lift jet restrictions at City Centre with a provisional order for home built aircraft, Porter has played a useful card, at the same time as Canada's next phase of airline operations unfolds.

WestJet is now embarked on a substantial transformation and one way or another, Porter would be a useful ally. It is doubtful that Canada can support three main narrowbody operators in what is presently a declining domestic air travel market, but with the current balance it has been possible.

Data from Canada’s national statistics agency show that expenditure on passenger air transport fell 2.3% during 1Q2013, while unemployment in the country stands at 7%.

However, Porter's strengths lie in its dominant position at the attractive downtown airport and its ability to extract a higher average yield as a result. And meanwhile, Bombardier is keen to secure a local purchaser for its CSeries. In short, all the ingredients for a very engaging denouement.