Uruguay’s two main airports have been recording rapid growth the last several months driven by continued expansion of flag carrier Pluna and the launch of local start-up BQB Air. Based on Feb-2011 data from Uruguay’s civil aviation authority DINACIA, arriving traffic at Montevideo Airport was up 33% to 104,287 passengers while arriving traffic at Punta del Este was up 42% to 18,585 passengers.

The increase at Montevideo was driven by expansion at market leader Pluna, which recorded a 53% increase in arriving traffic to 53,576 passengers and at BQB, which became Uruguay's second airline when it launched services in May-2010. BQB flew 5,564 passengers into Montevideo in Feb-2011, making it the airport’s fifth largest carrier after Pluna, TAM, LAN and Iberia. BQB already has a 5% share of the total market while Pluna’s share now exceeds 50%. 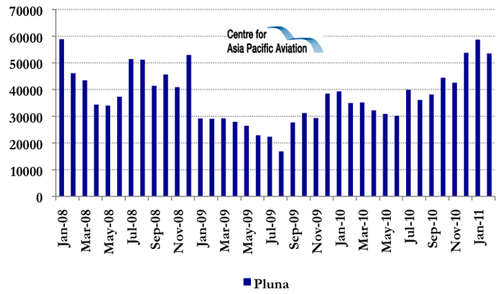 BQB arriving passenger numbers at Montevideo Airport: May-2010 to Feb-2011 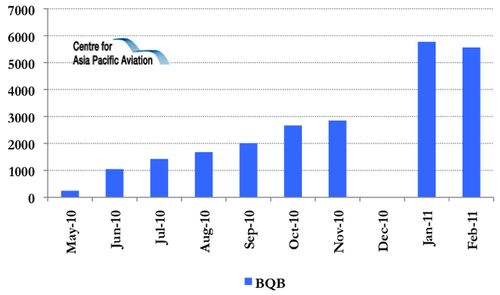 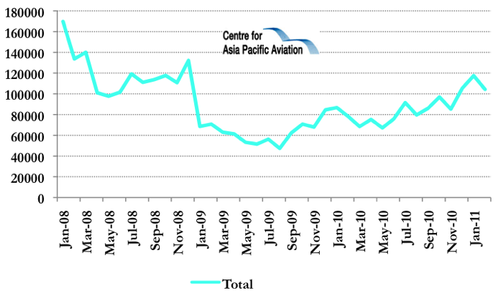 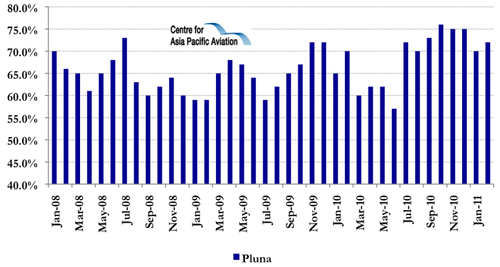 BQB average load factor at Montevideo Airport: May-2010 to Feb-2011 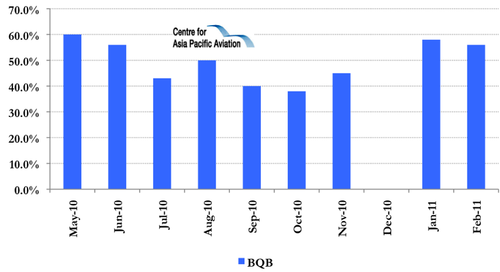 Traffic at Montevideo has been growing steadily since mid-2010, following the launch of BQB and the launch of a new expansion phase at Pluna which involved adding four aircraft to its Uruguayan network in 2H2010. Pluna, which now operates 10 CRJ900s, used the additional aircraft to add frequencies on several existing services from its Montevideo hub as well as launch new services to Belo Horizonte and Campinas in Brazil.

Pluna flew 457,761 passengers into its hub in 2010, a 38% increase compared to the 330,807 passengers it flew into Montevideo in 2009. Pluna did not encounter any challenges filling the extra seats as its load factor improved by three percentage points last year despite the additional capacity.

Further traffic growth at Montevideo is expected for the remainder of 2011 and 2012 as both BQB and Pluna continue to expand. BQB, which now operates two ATR 72s with options to acquire a further two, has unveiled plans to launch three weekly flights between Montevideo and Rosario in Argentina from May-2011. BQB has also listed Asuncion and Iguazu as potential new destinations from Montevideo.

Pluna already serves Asuncion and Iguazu. Pluna and BQB now compete on the Montevideo to Buenos Aires, Porto Alegre and Florianópolis routes. Rosario is currently not served by Pluna although it briefly served the city from Montevideo a couple of years ago before dropping the route due to a lack of demand. 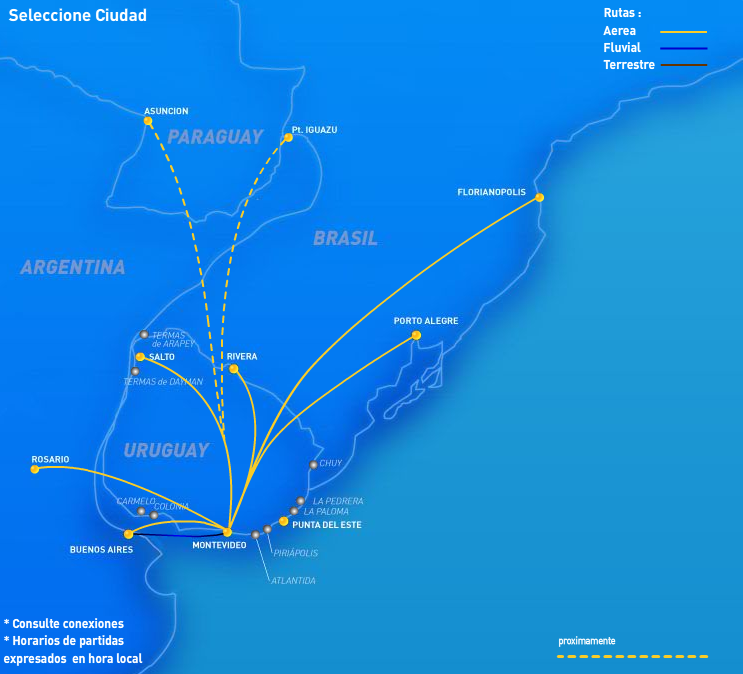 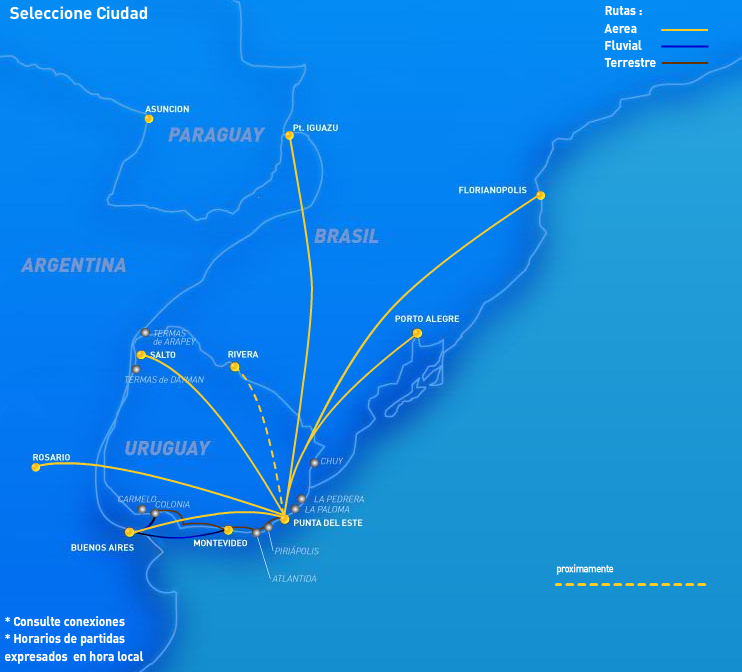 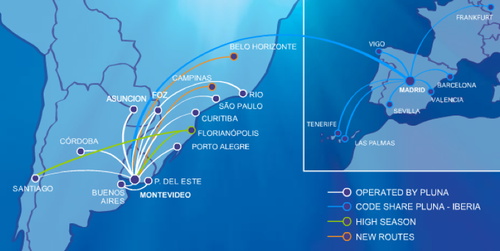 BQB also currently links Montevideo with the domestic Uruguayan destinations of Salto and Rivera. The domestic routes, which are currently served with four weekly flights, were always seen as risky because Uruguay has traditionally not had any domestic services due to the extremely small size of the country.

The performance of BQB’s Rivera route has been particularly disappointing. DINACIA data shows that only about 10,000 passengers in total travelled between Rivera and Montevideo (roundtrip) in the first 11 months the route operated – May-2010 to Mar-2011. Salto-Montevideo has performed better, with roughly 15,000 passengers travelling over the same period. BQB is now preparing to expand its Salto operation with a new direct flight to Buenos Aires that is slated to launch in May-2011.

Pluna, meanwhile, this week exercised options for a further three CRJ900s, which will added in late 2011 and be used to further add capacity in time for the Southern Hemisphere peak summer season. Pluna typically takes aircraft and expands its network towards the end of the calendar year because the peak travel season in Uruguay begins in December.

The seasonal fluctuations are most pronounced at Punta del Este, a beach resort on the Uruguayan coast which is particularly popular with Argentineans. Pluna and Aerolineas Argentinas have always significantly ramped up capacity on the Punta del Este-Buenos Aires shuttle route during the summer months. BQB’s entrance has resulted in even more capacity on this route during both the peak and off peak seasons as well as new routes from Punta del Este to Brazil. BQB’s first international routes were to Brazil due to the carrier’s initial problems securing route authorities for Argentina.

In Feb-2011, arriving traffic at Punta del Este was up 42% to 18,585 passengers. Pluna traffic was roughly flat year-on-year as BQB accounted for most of the increase. BQB flew 3,693 passengers into Punta del Este in Feb-2011, giving it 20% market share at the small airport. 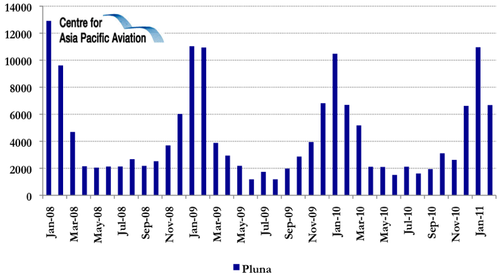 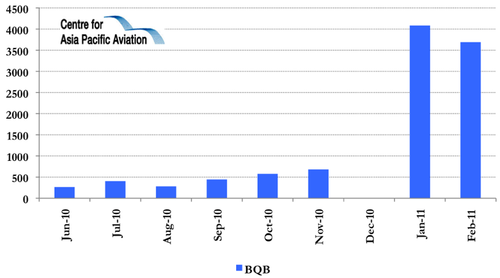 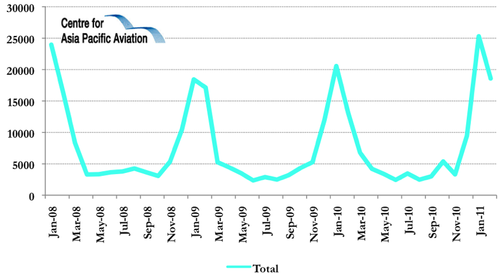 BQB now serves Punta del Este from Buenos Aires, Rosario, Porto Alegre and Florianópolis. But the latter three routes only account for a few hundred passengers per month. Traffic on the key Aeroparque to Punta del Este route, meanwhile, was up 49% in Feb-2011 to 16,680 passengers.

The launch and expansion of BQB has been controversial as Pluna, which is still partly owned by the Uruguayan government, has argued the market is too small to support two carriers. BQB is a new subsidiary of Buquebus, a large Argentinean-Uruguayan transportation company that is already one of the largest operators of buses and ferries in the two countries.

BQB Air initially planned to launch services in 2009, when it took its first ATR 72, but encountered numerous certification delays that deferred its launch into 2010. BQB also had to change its business plan several times prior to the launch due to roadblocks in securing requested route authorizations from Argentina as well as Uruguay. The business plan generally focuses on complementing the bus and ferry services offered by its sister companies but Buquebus also has indicated interest in opening longer routes with jet aircraft, potentially even to Europe.

Pluna dropped all its medium-haul and long-haul services including Madrid as part of a restructuring initiated by investment firm Leadgate, which acquired a 75% stake in the carrier from the Uruguayan government in 2007. The restructuring involved assuming a new regional carrier business model that has resulted in Montevideo becoming a hub for connecting thin city pairs within the southern part of South America under the radar screen of larger players such as LAN. The new connecting traffic, which Montevideo previously didn’t have, has helped drive up the airport’s traffic over the last two years.

The restructuring has so far been successful as Pluna's revenues are now higher than 2007 levels and the carrier, which for several years had incurred stiff losses, is again roughly break-even. Pluna’s network also has grown from only five destinations back in 2007, which were served with a mixed fleet of Boeing aircraft that were generally too large for the Uruguayan market, to 12 cities served with a simplified fleet consisting entirely of CRJ900s.