Pegasus Airlines is continuing with its Eastern European network expansion heading into the winter 2012/2013 schedule with three new routes to be launched in Oct-2012. A fourth route, to the Middle East, will also be launched in late Oct-2012.

The privately-owned Turkish LCC already operates an extensive European and domestic Turkish network with services to Eastern Europe and the Middle East growing rapidly. Pegasus has also been seeking to increase its Central Asian network but is facing difficulties receiving the rights to expand in this area.

In Oct-2012, Pegasus will be launching services from Istanbul Sabiha Gokcen to Belgrade (Serbia), Batumi (Georgia) and Lviv (Ukraine) in the first half of the month, followed by service to Dubai in the latter half.

The three new Eastern European routes are the latest of a number of new Pegasus routes to Eastern Europe since the latter half of 2011. The airline over the last year has commenced services from its base at Istanbul Sabiha Gokcen to Bucharest (Romania), Donetsk (Ukraine), Erbil (Kurdistan, Iraq), Pristina (Kosovo), Skopje (Macedonia), Almaty (Kazakhstan) and Omsk (Russia). 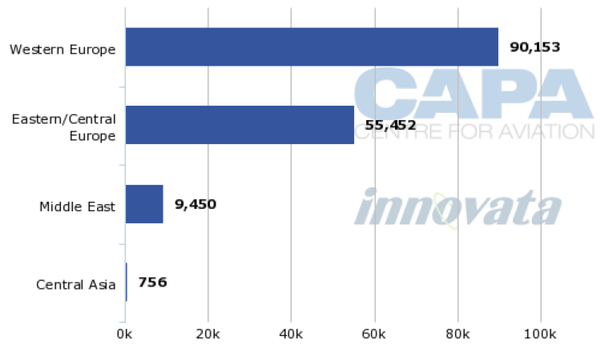 Pegasus is also keen to expand its presence further afield in Central Asia, which is yet to truly experience the LCC phenomenon. Pegasus’ entry into the Central Asian market came in Oct-2011 with the launch of daily Istanbul Sabiha Gokcen-Tbilisi service. This was followed in Jan-2012 with the launch of twice weekly Istanbul Sabiha Gokcen-Almaty service. The LCC has been trying to secure additional rights in order to launch more services to the Central Asian region however is facing challenges with these attempts.

Pegasus’ problems with bilaterals stem from Turkish Airlines holding all available traffic rights afforded to Turkish carriers for Central Asian destinations in Afghanistan, Armenia, Azerbaijan, Kyrgyzstan, Tajikistan, Turkmenistan and Uzbekistan. While destinations in these countries are within range of Pegasus’ narrowbody fleet, the LCC is only now authorised to operate to Georgia and Kazakhstan. 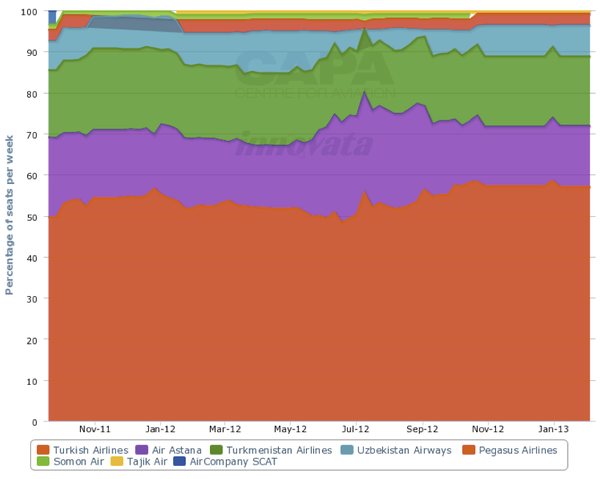 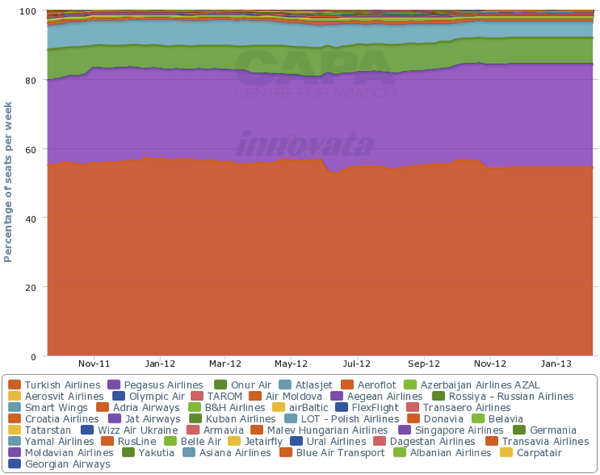 In the meantime Pegasus continues to strengthen its Central Asian connections through partnership agreements. In May-2012 Pegasus signed a codeshare agreement with Azerbaijan Airlines. This will see Pegasus codeshare on Azerbaijan Airlines’ daily Istanbul Sabiha Gokcen-Baku Haydar Aliyev service. Members of Pegasus' frequent flyer programme, Pegasus Plus, will be also able to earn flight points when travelling on the service.

Pegasus has been close to placing a large aircraft order for the past year. The airline is expected to place an order for between 40 and 100 A320s or 737s. In Apr-2012 Pegasus CEO Sertac Haybat told CAPA he expected the 100-aircraft order would be placed within one month and deliveries to be spread out over six to seven years. But an order has not yet been announced.

The new aircraft will mainly be used to accelerate the expansion of Pegasus’ international network. The carrier’s ability to pursue such expansion heavily depends on continued liberalisation, particularly in the Turkey-Central Asia market. But there is still some room for growth in Pegasus’ Eastern European network, which has been growing rapidly and is a promising market for the carrier.