Propeller Airports has announced that Global Infrastructure Partners (GIP) has become an investor in the Paine Field Passenger Terminal at Everett Paine Field Airport (Washington). GIP is managing the investment on behalf of the Washington State Investment Board (WSIB).

This is a significant departure for GIP, a U.S. and UK-based entity that manages infrastructure investment funds across multiple sectors, including transport, with approximately USD50 billion of assets under management. In its time actively involved in the air transport business, GIP majority-owned and managed the downtown London City Airport in the UK, which it sold in 2016, and until Mar-2019 it was also the majority investor in London Gatwick Airport.

Paine Field is a modern technically equipped terminal and location in an economically fast growing region. Seattle-Tacoma Airport is facing up to potential capacity issues, although it is combating that scenario with a USD2 billion infrastructure investment.

In its time actively involved in the air transport business, GIP has majority-owned and managed the downtown London City Airport in the UK, which it sold in 2016 to assorted pension funds for a profit of over GBP1.2 billion, and has been the majority investor in London Gatwick Airport, the country’s second busiest.

However, in Mar-2019 Vinci became the majority shareholder at Gatwick, with GIP retaining a 49.9% stake after other pension and investment funds had exited. In that case, the profit to the original consortium was GBP1.4 billion.

Since then, GIP has sold a small percentage of its remaining equity to two foreign investment companies. Its only other European airport investment is at Edinburgh (100%), which occasionally surfaces as a possible sale, although not for the time being.

GIP appears to be slowly disengaging itself from Gatwick – whose future is still not clear before a spade has been turned on Heathrow Airport’s third runway (if it ever is) – while leaving Vinci to manage it.

GIP is not inactive, though. Although not making as many investment proposals as it did in the past (in fact, just now very few of the big investors are), within the last year it has been linked to a bid for a majority stake in Malaysia Airports Berhad and has expressed interest in the concessions on six Indian airports and in a minority share in Mumbai Airport within a consortium. Potentially, it could also acquire a stake in Groupe ADP, again within a group of investors, if that deal should go through.

So why the interest in Everett Paine Field, which was a small general aviation facility, 25 miles (40 km) north of Seattle and home to Boeing's Everett Factory?

A modern technically equipped terminal and location in an economically fast growing region are the attractions.

The modern, tech-heavy passenger terminal at Paine Field is operated by Propeller Airports, a subsidiary of the New York-based private equity firm Propeller Investments. It is one of a small number of U.S. firms seeking to engage in the operation of small regional airports on a public-private partnership basis. Inspired by the wholesale privatisation of airports that was kicked off by that of the British Airports Authority in the 1980s, and by the fact that Seattle and Northwest Washington State is one of the fastest growing areas of the country, Propeller Airports has put most of its eggs into this particular basket – although it has ambitions for others; it was unsuccessful in launching commercial operations at Briscoe Field airport in Georgia, close to Atlanta.

Paine Field’s development was covered in this article in 2018:

Environmental objections having been overcome, Paine Field is now served by Alaska Airlines, which has three quarters of the capacity share, and United Airlines, which has the other quarter. The route map below shows that all services are still in the western part of the U.S., with the exception of Denver.

The airport is wholly domestic, and there are no known plans for international services so far.

In the short term, more connections to alternative hubs might be targeted, especially to Chicago, Miami and Atlanta, although the latter seems unlikely as Delta is committed to Seattle-Tacoma airport as its west coast hub. 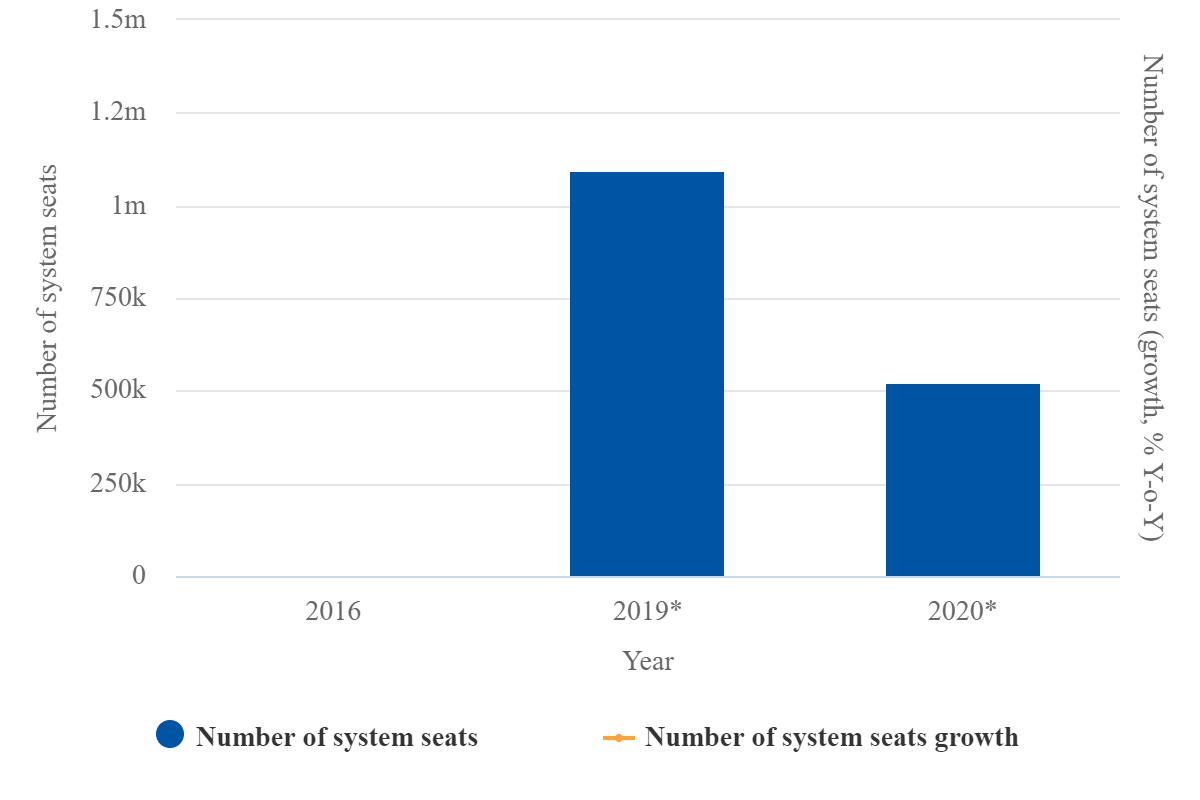 * The values for this year are at least partly predictive up to 6 months from 30-Sep-2019 and may be subject to change.

One peculiarity of Paine Field is that currently 10% of its seats are in first class, compared to 6.4% at Seattle-Tacoma, 4.9% in the U.S. as a whole, and 2% globally. Presumably that higher first class ratio is influenced by Boeing passenger usage. Boeing builds 747, 767, 777 and 787 variants there.

While official passenger statistics are not known, it is understood that 600,000 passengers used the terminal in 1H2019. As the chart above shows, more than one million seats will have been made available by the end of 2019.

So, Paine Field benefits from being located in a fast growing region economically, with one global company literally on its doorstep and many others (Microsoft, Amazon, Starbucks et al.) in the locality.

GIP appears to be acting both as an investor and a manager here, the latter role being one that it had previously shied away from, at least in a ‘hands-on’ capacity. But the management is only of the investment, including that by Washington State Investment Board, a limited partner of GIP, which is a pensions fund administrator. Operational management remains with Propeller, which is headed up by Chairman Robert Aaronson, who was one-time Director-General of Airports Council International.

Nevertheless, GIP’s latent airport experience – and particularly that with the London City Airport – is there to be called upon.

As reported in CAPA last year, Seattle-Tacoma Airport is facing up to potential capacity issues, although it is combating that scenario with a USD2 billion infrastructure investment.

Nevertheless, it seems that GIP views Paine Field as more than a ‘reliever’ airport for Seattle in the long term, and that is the reason for it taking a stake in its future.

For Propeller Airports’ part, it is going some way to shaping the future of public-private co-operation in the U.S. regional airports’ sector.