Seattle Tacoma International airport has posted significant passenger growth during the past few years, driven mostly by Delta’s decision to develop Seattle as its long haul springboard from the US West Coast. As Delta has grown, the airport’s dominant airline – Alaska Air Group – has asserted its position with its own expansion from its largest hub.

The build-up by both Alaska and Delta has obviously resulted in more options for passengers travelling through Seattle Tacoma International, but that growth has also resulted in Seattle facing constraints, particularly in handling international passengers.

The airport has a raft of a construction projects under way, including a new high profile international arrivals facility scheduled to open in 2020. Structural expansion is no doubt crucial for Seattle as it continues to march towards reaching its passenger capacity thresholds but the airport’s physical footprint is limited, which means local governments will need to give serious consideration for a second airport in the region at some point in the future.

Everett’s Paine Field is gearing up for the start of commercial services in Feb-2018 but with just two gates, the facility will play a small role as a reliever airport for Seattle Tacoma.

Seattle has long enjoyed a favourable position as the largest airport in the US Pacific Northwest. The region is home to the tech giants Amazon and Microsoft, and of course, Boeing’s commercial aircraft production.

By capacity, Alaska Airlines has been Seattle’s largest airline for decades and still remains the strongest operator at the airport, representing 53% of Seattle Tacoma International’s departing frequencies.

Seattle Tacoma International percentage of departing frequencies by airline, as of late Nov-2018 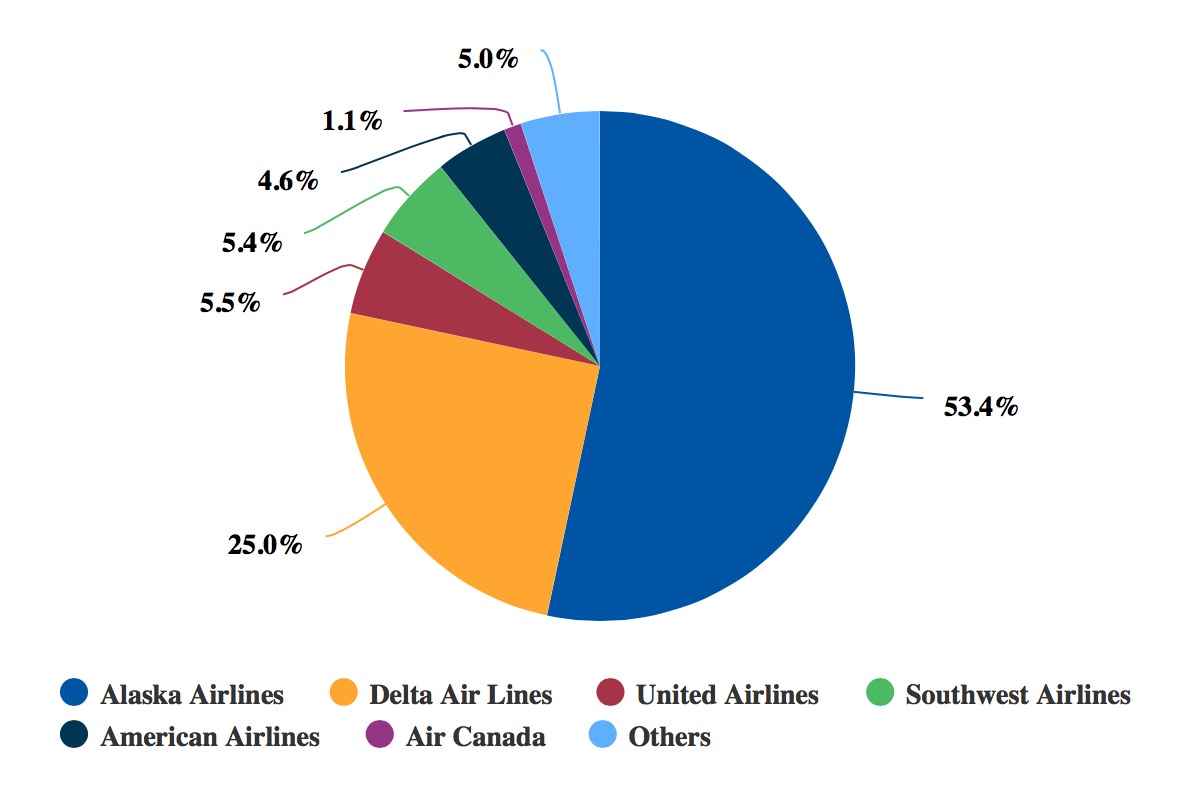 Beginning in 2012, Delta started to develop Seattle into its primary long haul hub on the US west coast, and eventually severed a long-standing relationship with Alaska in order to build up its own domestic footprint to feed its long haul flights and those of its SkyTeam alliance partners.

Seattle also has services to London Heathrow operated by British Airways and Delta’s JV partner Virgin Atlantic, as well as to Reykjavik offered by Icelandair and flights to Dublin operated by Aer Lingus. Eva Air operates long haul flights from Seattle to Taiwan.

The airport’s long haul trans Pacific and trans Atlantic network footprint is split evenly between Europe and Asia Pacific, with service to six destinations in each region (as of late Nov-2018).

Delta is planning further long haul expansion from Seattle in 2019 with new service to Osaka, after deciding to cut its nonstop flights from Seattle to Hong Kong.

Much of that long haul service has been introduced during the past decade, which has resulted in Seattle Tacoma International essentially doubling the number of international passengers travelling through the airport from 2009 to 2017. 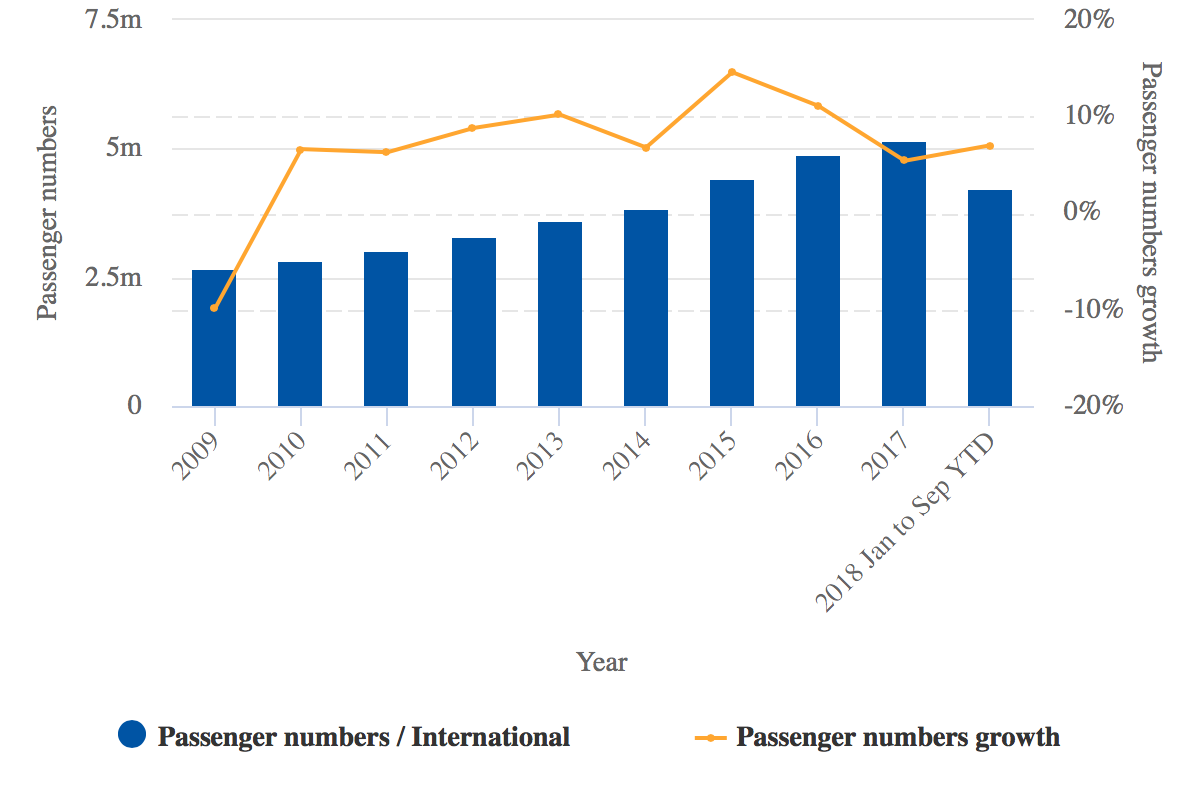 The airport’s overall passenger growth has jumped 41% during the past five years, to nearly 47 million in 2017. 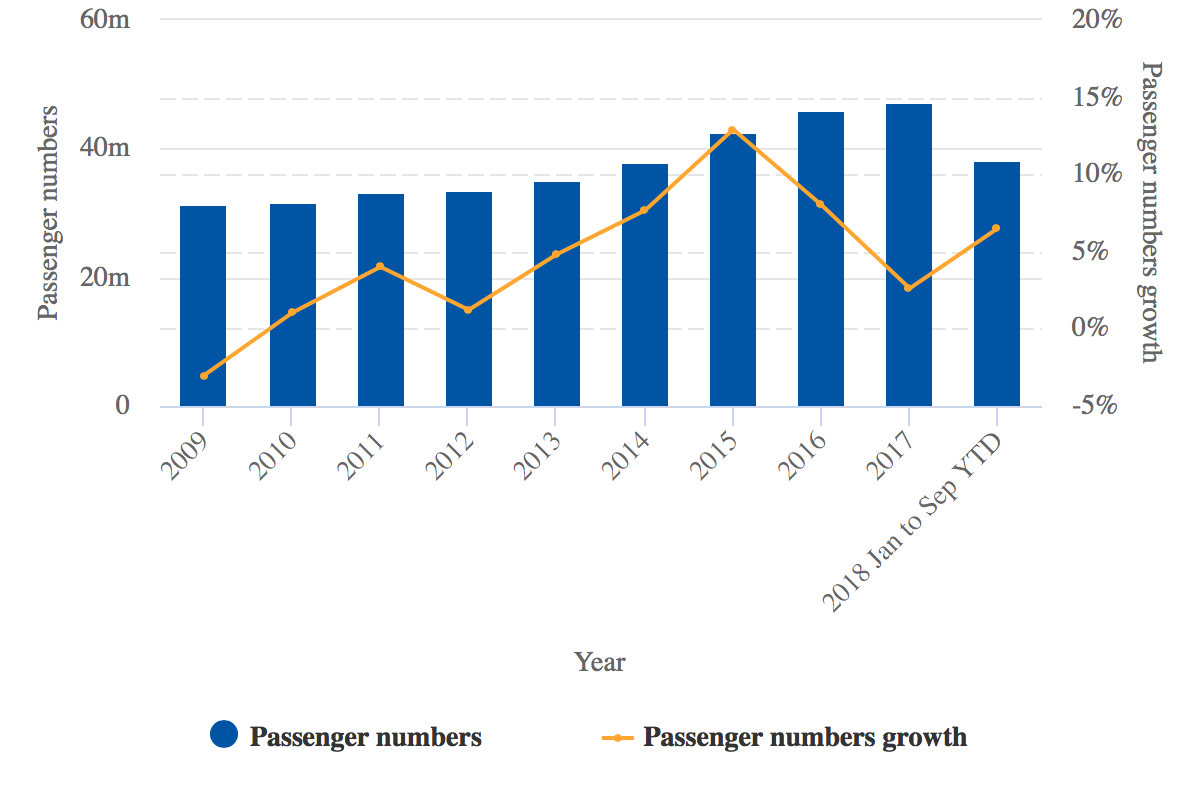 Even with planned expansion, Seattle Tacoma could still face a capacity crunch

Seattle’s rapid growth has resulted in the airport’s operator, the Port of Seattle, working to increase the airport’s capacity. Approximately USD2 billion in construction projects are under way. A new annex to the airport’s Concourse D has recently opened, which includes six additional gates.

Construction of a new international terminal to alleviate the congestion and wait times that international passengers experience upon arriving in Seattle has also begun. The local news outlet KIRO has stated that average wait time in a hallway between gates and passport control during 2018 has averaged 27 minutes, up from 25 minutes the year before. At one point, Delta Air Lines stated that it was not planning to add more long haul services from Seattle until the new international facility was completed.

Back in 2016 Seattle Magazine reported that the airport’s capacity could reach 66 million by 2034; however, airport officials warned in the publication the Seattle Time that Seattle Tacoma international could reach capacity in six to ten years.

Seattle Magazine highlighted that Seattle Tacoma’s footprint is limited because of three cities bordering its property, which could mean that government officials need to consider developing a second airport in the region to handle passenger growth.

Alaska and United are working to launch flights from Paine Field in Everett, Washington, which is approximately 40km north of Seattle, in 1Q2019.  United is operating services to Denver and San Francisco and Alaska plans to operate services from Paine Field to eight West Coast markets.

Alaska has previously stated that services from Paine Field would make it easier for travellers residing in the Northern Seattle metro area. Traffic congestion on Interstate 5 to Seattle Tacoma International from the north makes it challenging for some passengers to reach the airport.

Southwest was also working to launch service from Paine Field but has opted to transfer its slots at the airport to Alaska.

The service from Paine Field could be a small scale experiment to determine the viability of a second airport for the Seattle metro area. But the likelihood of Paine Field expanding its capacity is low. The terminal at the airport will accommodate 24 departures per day, and there are no immediate plans to grow Paine Field’s commercial footprint.

Cast in a larger light, Seattle Tacoma’s passenger growth and the race to accommodate healthy passenger forecasts are a result of the region’s strong economy and its position as a connection point in the US Pacific Northwest.

It is a problem many US airports would like to face, and it will be interesting to see how Seattle Tacoma works to ensure that it remains a growth story, since its passenger levels could top over 60 million in the not too distant future.