The emergence of the Omicron variant of COVID-19 has caused many Asia-Pacific countries to adjust their border settings, and if they go further down this path in coming weeks it could derail promising signs of recovery in the airline and travel industries.

The Omicron wave once again illustrates the problem of different countries taking widely varying actions, and in some countries there are differences even between states, or between state and central governments. This patchwork of requirements and restrictions risks creating confusion for travelers and airlines. The update below outlines how some key Asia-Pacific markets – India, Japan, Australia and Singapore – have reacted to the latest COVID-19 development.

While airlines are generally not cutting operations, this could change quickly

There is still a dearth of hard evidence regarding the nature of the Omicron variant and how serious the threat is. However, this has not stopped countries around the world taking preemptive steps to stop the spread of this strain until more is known about it.

So far the most common action by Asia-Pacific governments has been to restrict travel from a limited number of southern African nations where most of the early Omicron cases were identified. As more cases popped up in countries outside Africa, many governments have added them to the high-risk list. However, there are often significant differences in the composition of these lists.

Another step being taken by multiple countries has been to put a pause on planned border reopening measures. There are also many examples of increases in testing and entry requirements. So far at least, there are relatively few instances of the region’s governments imposing more sweeping measures applied to all international arrivals.

Asia-Pacific airlines have not yet had to make mass route cuts in response to the growing list of Omicron responses. Many planned reopenings of international routes by airlines are also still on track. However, several of the region’s carriers have stressed that they are closely monitoring the situation to see if changes are needed.

Only two airlines are currently operating routes between the Asia-Pacific region and South Africa, where the first Omicron cases were identified, according to data from CAPA and OAG. The chart below shows that Singapore Airlines and Air China currently have routes to the country. There were five airlines with service between South Africa and Asia-Pacific before the pandemic. Qantas plans to resume its Johannesburg service in Jan-2022. 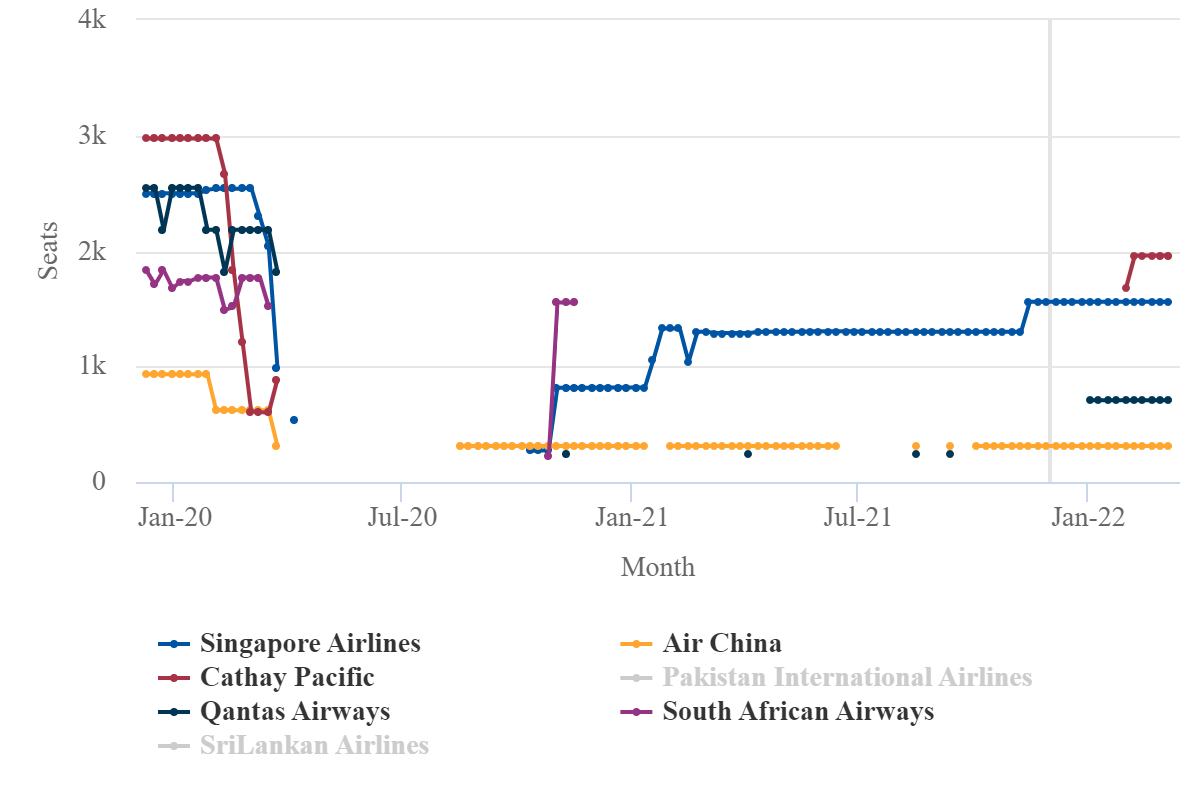 Japan’s response has escalated quickly – with a few course corrections

Japan’s measures are an example of how fluid – and rapidly changing – travel restrictions can be when new COVID-19 developments occur.

The country already had very tight restrictions on inbound travel, and it has quickly ratcheted these up further due to the Omicron news. Its initial step was to require quarantine for all travelers from certain African nations.

Its next step was to close its borders to all non-resident foreign travelers from midnight on 29-Nov-2021, for a period of 30 days. Most foreign visitors were already barred due to Japan’s existing COVID-19 measures, although the government had recently eased entry restrictions for limited categories such as business travelers. This easing has now been reversed.

The government also decided to decrease the overall limit on travelers entering Japan – either foreigners or citizens. The cap was raised to 5,000 people per day in Nov-2021, but has now been reduced back to 3,500 per day.

On 1-Dec-2021, Japan’s airlines suspended further sales of any inbound international tickets through the rest of Dec-2021, at the request of the government. Tickets for outbound flights would still be sold. However, a short time later the government changed its stance, allowing airlines to sell some tickets for Dec-2020 so Japanese travelers can return home.

Entry rules have also been shifting in India, where state requirements in some cases have conflicted with central government guidelines. This caused the Indian government to ask one of the country’s largest states to step back from new travel restrictions that go further than those directed by national authorities.

The state of Maharashtra – which includes Mumbai – revised its travel restrictions on 30-Nov-2021 due to concerns over Omicron. In addition to testing requirements, arrivals from “at-risk” countries were required to undertake seven days of institutional quarantine and another seven of home isolation. All other international arrivals into the state had to complete 14 days of home isolation.

However, the central government had already released revised requirements for international travel on 28-Nov-2021. In contrast to the Maharashtra rules, the central government requires travelers from at-risk countries to be tested on arrival and then isolate at home for seven days. Other international arrivals have no compulsory quarantine or home isolation, and they are subject to random tests at the airport.

Under the state’s latest rules, only travelers in this ultra-risk category have to complete the seven days of quarantine and seven of home isolation. The state said the other countries on the broader at-risk list will be subject to the government guidelines – which means travelers from such places will only need a seven-day home isolation.

International flights to and from India are currently only operating under bilateral travel bubble arrangements, with limited flight numbers. Before the Omicron concerns emerged, the Indian government had said it would open its borders further and allow regular scheduled international services to resume from 15-Dec-2021.

However, the government said the reopening date is now under review due to the omicron concerns. The Directorate General of Civil Aviation said the COVID-19 situation is being watched closely, and a decision on the international resumption date will be made “in due course.”

Australia has also moved to adjust its border restrictions due to Omicron. As has often been the case in Australia, some of the country’s states are taking their own measures in addition to the federal requirements.

On 27-Nov-2021, the government announced it would bar entry to any non-Australians coming from nine African countries, although this was later revised to eight countries.

Australian citizens or residents who have been in these countries within the past 14 days must quarantine on arrival in Australia. This will also apply to Australians who had already arrived before the announcement. These measures will remain until 15-Dec-2021.

Even before the arrival of Omicron, only fully vaccinated Australian citizens and residents were allowed to reenter the country, as well as vaccinated “green lane” travellers from New Zealand and Singapore.

On 29-Nov-2021, the government also announced that the planned next step of its border reopening will be paused until 15-Dec-2021. It had previously intended to allow certain international skilled workers and students to enter from 1-Dec-2021. The planned reopening of travel from Japan and South Korea will also be paused.

The states of New South Wales and Victoria are each requiring all arrivals from overseas to isolate at home for 72 hours, as new requirements prompted by the Omicron variant. Before these measures were put in place, NSW and Victoria were allowing vaccinated Australian residents to reenter from overseas without isolation or quarantine.

Tasmania has gone further, essentially closing its borders to anyone arriving from overseas, aside from the South Island of New Zealand.

Other Australian states generally still have quarantine rules in place for international arrivals.

Other Asia-Pacific countries are also introducing new requirements. This includes Singapore, which is particularly notable since it has been one of the region’s leaders in terms of reopening international travel.

Singapore has been progressively opening vaccinated travel lanes (VTLs) with countries around the world, allowing quarantine-free entry under these bilateral agreements. Another five VTL agreements came into effect on 29-Nov-2021, boosting the VTL total to 18 countries.

Three Middle Eastern countries – Qatar, Saudi Arabia and the United Arab Emirates – were scheduled to be added to the VTL list from 6-Dec-2021. However, on 28-Nov-2021 the Singapore government deferred the launch of these VTLs due to the Omicron concerns. No new date has yet been set.

Singapore’s Ministry of Transport said the deferment decision for the three countries was made “in view of their proximity as transport nodes to the affected countries of Botswana, Eswatini, Lesotho, Mozambique, Namibia, South Africa, and Zimbabwe.” The three Middle Eastern countries are major air travel hubs.

The Singapore government has also introduced a range of enhanced testing measures in response to the Omicron situation. The Ministry of Health noted that it “will continue to monitor and evaluate data on the Omicron variant as it emerges and adjust our border and domestic measures accordingly.”

Greater conformity in approach would be very helpful, but it remains a pipe dream

Many vital details are still lacking about the Omicron variant and its severity. So it is understandable that until more is known, Asia-Pacific countries want to take precautions in case this variant turns into another serious wave. Recent experiences with the Delta variant demonstrated what sort of damage a new variant can cause to a country’s population and travel industry. Many countries in the region are only just starting to open up again following the Delta wave – and others are yet to do so.

However, the wide differences in response by various governments in Asia-Pacific to the Omicron threat show there is still little uniformity in how countries assess and address risk. And even within countries there are often differences in approach between state and central governments, and between different states. All of this creates a confounding jigsaw of restrictions and requirements that in itself discourages travel. It takes the emergence of a new threat to highlight that this problem still exists to largely the same degree as when the COVID-19 pandemic began.

After more than 18 months into the pandemic this is little short of a dereliction of national leadership. To fail to establish some form of coordination procedures falls far short of what a connected world needs.

The problem is compounded by the technicalities of different limbs of government being involved in key decisions, with health and immigration authorities overlaid by the politics of national economics. It is understandable that different states have varying approaches - but that is no excuse for the abject failure to establish channels for conferring with partners and coordinating approaches as new events predictably occur. To adopt a little from Oscar Wilde, to fail once is misfortune, for it to happen twice is sheer carelessness.

But for it to continue happening, with so many lives and livelihoods in jeopardy, is unforgivable.