In today’s aviation marketplace, it is difficult to imagine a world absent the threat or promise of Dubai. The rise of Dubai is either a new phenomenon to be celebrated or the rattle of Armageddon to the rest of the industry.

Yet neither perspective is able to change the reality that, aside from China, no other region on earth has displayed the meteoric rise that is evident at DXB. And we may safely assume, that with a current fleet of 153 aircraft, and 363 more to come, Emirates will cause Dubai to regularly click up the chart. Some observers believe that DXB will be in the top five within a few years, especially those in Dubai.

In looking at Beijing, we found that the airport was at least on the list of top 50 (49) in 2000. The same was not true of Dubai, which failed to appear at all. Emirates’ jaw-dropping aircraft orders were still in the future and the company operated primarily A310s and A313s, with a few 777s entering the fleet.

The airline operated a total of 243 non-stop weekly services across its much smaller network, with few flights being daily. Those same destinations in 2011 have 557 weekly flights, many of them flown with A380s. Plus the number of destinations has increased by about 150% since 1999, creating a network that serves every continent but Antarctica. 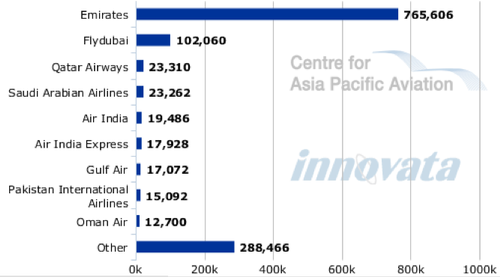 Despite the juggernaut-like hold that Emirates is assumed to hold at the airport, its actual share of the total weekly uplift is just under 60% – far less dominance than at many US fortress hubs.

What has happened at DXB is that the growth of Emirates has attracted service from a majority of legacy carriers across the globe that had no presence in the market a decade ago.

A 'must have' destination

All of this service, focussed on a small emirate, has made it an international hub that is known across the world and included in the networks of airlines from Aeroflot to Yemenia. 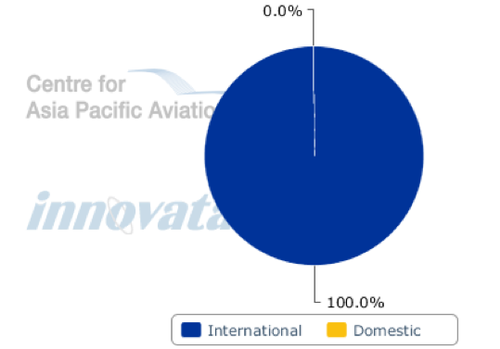 It is also one of the very few major hubs that has minimal alliance presence, though many would advocate that Emirates is the kind of behemoth that alliances aspire to be. 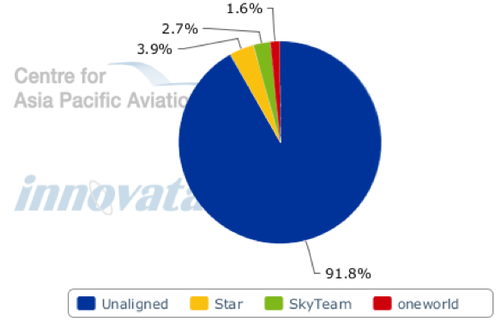 While all three groups have pitifully small presence, oneworld, because of its size and structure, has the smallest bit of a tiny piece.

Those available weekly seats have an astounding global distribution. Close on the heels of seats within the Middle East, is the vast offering to South Asia, primarily India, making DXB perhaps India’s primary international connection point and complicating the development of Indian carriers.

DXB is also a conduit for the growing traffic between China and Africa, with a new destination, Rio de Janeiro, offering more seats between Asia and Brazil. 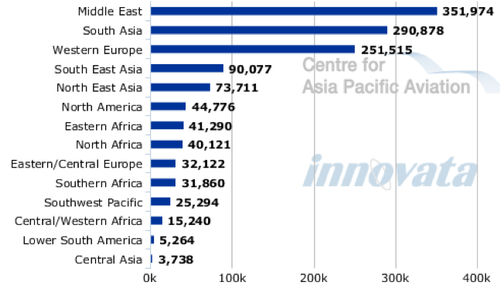 Popular for price and schedule

Fares on Emirates are one of the points of contention between the carrier and its legacy peers. A round-trip fare between DXB and JFK is steady at USD1775 for the journey of 13668 miles, about USD0.13 per mile, and far below the cost per mile between London and New York.

With business-class promotions touting fares between USD5000 and USD6000 round-trip from the US West Coast to cities in India, it is clear that EK competes on both price and schedule.

Is it real and can it last?

In theory, the possible pitfalls for Dubai are legion. Observers cite the fact that Dubai is a “created” destination with little inherent demand; that its airline is expanding too fast, running the risk of overcapacity and saturation. Or that economic changes will undermine Dubai’s growth and make its airline a casualty.

Thus far, the naysayers have been proved wrong. The Emirate suffered significant economic damage during the recent downturn but the airline continued to prosper. What is apparently true is that Dubai’s location, astride trade routes that have flourished for millennia, actually does make it an ideal transit point, helped immensely by aircraft technology that allows almost any two cities be connected with a single stop.

An environment that is growth friendly

Added to that mix is a government that is acutely aware of the value of its location and the ability to operate unrestricted 24/7. No place on earth is assured of its long-term viability as a hub, be it for transport, finance or any other human activity. Dubai, like every other location is at risk as its neighbourhood becomes increasingly unruly and foreign governments are getting ornery about continued market incursions by Emirates.

Nonetheless, the smart bet will place money on the premise that DXB will climb, rather than fall, amongst the global rankings. The ultimate success of Dubai and Emirates is rooted in their ability to continue to provide good service at acceptable fares. If they continues to do so, customers, perhaps despite external influences, will keep it on the fast track.