In Part 1 of this CAPA report on Norwegian Air International's application for a US foreign carrier permit, we discussed the policy debate that this has unleashed. We suggested that those opposing NAI were motivated by a desire to raise anti-competitive barriers against a new and more efficient business model.

This second part of our report looks at Norwegian's impact on the incumbents' traffic on its US routes, particularly on the five city pairs where there is at least one direct competitor that is calling on the US Department of Transportation (DOT) to deny NAI's application. Two thirds of Norwegian's US routes, accounting for almost half of its US seats and frequencies, are new markets.

Our analysis of data from OAG Traffic Analyser suggest that, on Norwegian's New York routes from the three Scandinavian capitals, it has both taken traffic from existing participants and stimulated market growth. On London to New York and Los Angeles, its smaller size and a market contraction make its impact less clear, but it is probably also attracting new traffic in addition to starting to take market share.

12 of Norwegian's 18 US routes have no competitor

As of the week of 15-Jun-2015-21-Jun-2015, Norwegian operates 18 routes and 45 weekly frequencies across the North Atlantic and has a 12% share of total seats on all these routes combined, according to schedules data from OAG (see table below). Among these, 12 routes and 22 frequencies, representing almost half of its trans-Atlantic seats, were newly created by Norwegian and so there is no direct competitor on the same city pair.

These new services may have taken some transfer traffic from other airlines on the North Atlantic that enable passengers to reach these destinations via one or more connecting points. In particular, Norwegian's services from Stockholm and Oslo to Oakland in California may have taken traffic from SAS' Copenhagen-San Francisco operation. However, in classic LCC style, Norwegian has primarily created new traffic on these 12 routes.

In addition to the above routes, Norwegian will launch Las Vegas flights from Copenhagen and Stockholm in the coming winter season. It is also reported to be considering services from the Danish cities of Aalborg and Billund to New York (but probably not to JFK), using 737 MAX 8 aircraft from 2017. There are no other airlines currently operating any of these routes.

This leaves six Europe-US routes on which there are incumbent operators, who may be suffering from the additional competition brought by Norwegian and may be keen to reduce the impact. On one of these six competitive routes, Gatwick-Orlando, none of the competitors have publicly expressed opposition to NAI's application for a US foreign carrier permit.

The five remaining routes are those between the three Scandinavian capitals and New York and those linking London Gatwick with New York and Los Angeles. On these five routes, Norwegian's share of total seats is just 6% (according to data from OAG for the week of 15-Jun-2015).

The impact on the traffic carried by the existing operators on each of these five routes is discussed below.

On Oslo-New York, which Norwegian entered in Jun-2013, the first 12 months were clearly characterised by a switch of traffic from incumbents to the new entrant, according to passenger bookings data from OAG Traffic Analyser, adjusted to rolling 12M bookings for each airline, including those operating via a third hub airport. This analysis shows that all competitors on Oslo-New York suffered a loss of traffic in the first 12 months after Norwegian entered, in particular United and SAS. Connecting traffic carried by British Airways and Icelandair over their hubs also suffered.

However, since Jul-2014, although most competitors have continued to lose traffic, their rate of loss of traffic has slowed and BA has even modestly increased its traffic. Moreover, total passenger traffic between Oslo and New York has grown since Jul-2014 on a rolling 12M basis. 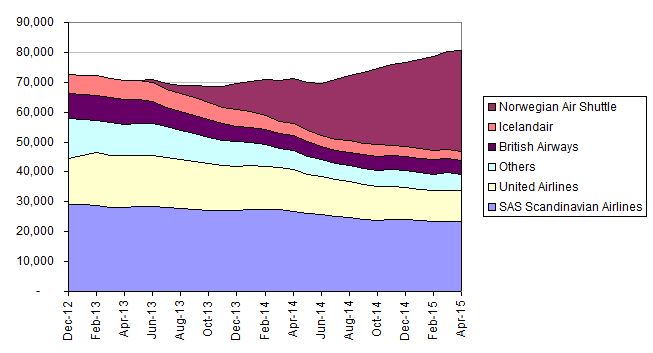 On Stockholm-New York, which Norwegian also entered in Jun-2013, the first 12 months witnessed both a switch of traffic away from incumbents and an increase in total traffic in this market. United suffered the most among the direct competitors, while SAS managed to keep its traffic relatively stable in the first year. Connecting traffic carried by British Airways over London actually increased slightly, but Icelandair felt a significant fall in traffic transferring over Reykjavik.

Since Jul-2014, unlike the growth on Oslo-New York, the total Stockholm-New York market has stabilised on a rolling 12M basis. The impact of Norwegian's growth has been to take traffic away from all competitors, in particular from Icelandair and United. 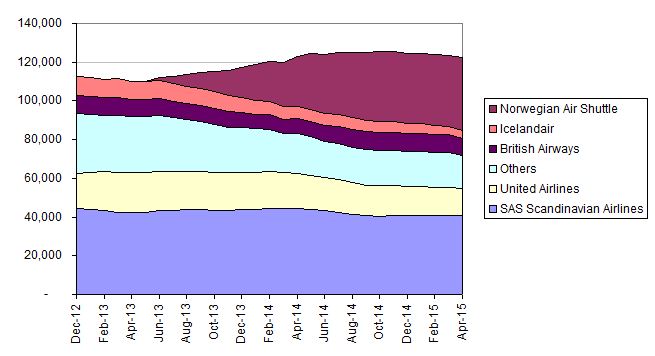 Norwegian commenced serving New York from Copenhagen-New York in summer 2014, almost a year later than it did from the other two Scandinavian capitals. So far, since Jun-2014, there has been both a switch of traffic away from incumbents and an increase in total traffic in this market.

The greatest loser of direct traffic on this route has been SAS, which has been hit more than on Oslo and Stockholm. Icelandair has suffered a significant fall in traffic transferring over Reykjavik, while British Airways has managed to increase modestly its connecting traffic over London. 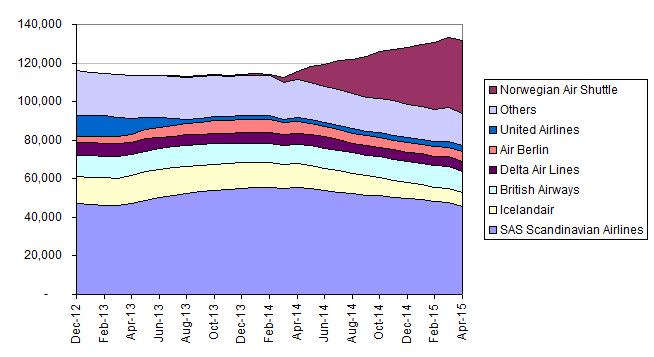 Norwegian has a much smaller market share on London-New York, which it entered in Jul-2014 and which is dominated by BA/American and Virgin/Delta. Its entry into this city pair came when the market was experiencing a modest fall in total passenger numbers as the two main alliances on the city pair cut capacity (although United has continued to grow).

Norwegian's small market share and this drop in the total market make it difficult to isolate the impact of its entry on the incumbents in the London-New York market. It seems likely that its presence has been felt more in stimulating a new market segment than in taking significant traffic from its competitors, although there is some evidence to suggest that it is also starting to have a market share impact by taking some traffic from existing participants. 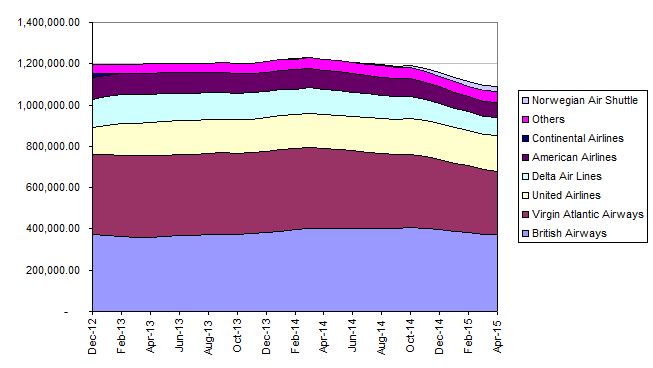 Norwegian's share of London-LA is larger than on London-New York, but considerably less than on its New York services from Scandinavia. As with London-New York, the data from OAG Traffic Analyser show a drop in the total market from a few months before Norwegian's entry and it is difficult to isolate its impact on the traffic of the incumbents. Again, it has probably had the effect of stimulating a new market segment, while also starting to take some traffic from existing participants. 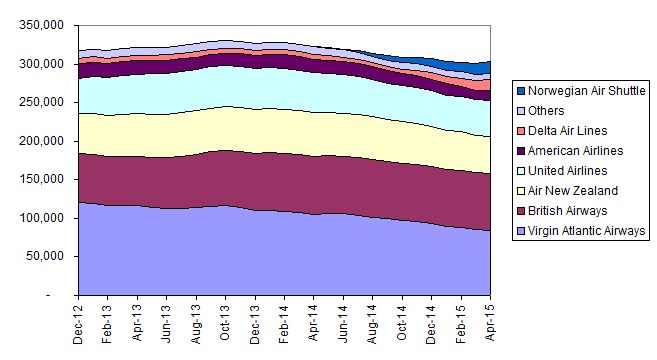 With the exception of SAS, the airlines opposing NAI are those least affected

As we discussed in the first part of this report on NAI's application for a US foreign carrier permit, the motivation for its opponents is to restrict competition, even if the stated reasons relate to labour standards. To some extent, this is fair enough. If competition is harming you, why not try to fight it with any means available, including regulatory?

That said, the EU-US open skies agreement has directly led to antitrust immunity for metal neutral joint ventures with the branded global alliances that control 82% of seats on the North Atlantic (87% including Virgin Atlantic, which has an immunised JV with Delta, albeit outside the alliance structure; data source: OAG/CAPA for the week of 15-Jun-2015).

SAS faces Norwegian on a higher proportion of its US network than do any of the other airlines that oppose NAI's application. Norwegian overlaps with SAS on routes representing 46% of its US network. However, with the exception if SAS, the airlines that have publicly stated their opposition to NAI's application for a US foreign carrier permit are those with the least degree of overlap with Norwegian's US operations.

Norwegian overlaps with the Big Three US legacy airlines, who publicly oppose NAI's application, on 10% or less of their North Atlantic seat capacity. The majority of this overlap on London-New York, where Norwegian has only a 3% share of total seats on the city pair. Moreover, Norwegian operates from Gatwick, rather than from Heathrow, which is the London airport for all the other major operators.

Lufthansa, Air France and KLM currently have no direct overlap with Norwegian on North Atlantic routes and it seems unlikely that they will any time soon. Nevertheless, all three of these European airlines oppose NAI's application.

By contrast, Virgin Atlantic faces competition from Norwegian on city pairs accounting for 42% of its North Atlantic capacity and BA's North Atlantic network overlaps with Norwegian on 32% of its seats in this route region. In spite of this, neither Virgin nor BA has raised objections to Norwegian's business model. Indeed, BA's OpenSkies subsidiary has publicly supported it. As noted above, Icelandair appears to have lost connecting traffic between Scandinavia and the US, but has not publicly opposed NAI.

Be careful what you wish for....

Regardless of these statistics and even, to some extent, of the arguments, those opposing NAI's application cannot really be blamed for trying. They are serving their own interests by attempting to restrict competition. If the regulatory authorities - in this case, the DOT - is unable or unwilling to give a clear and prompt ruling, the fault lies more with these authorities than with those seeking to manipulate the regulatory framework in their favour.

Nevertheless, those that oppose NAI's trans-Atlantic plans would do well to consider the old saying: "be careful what you wish for". There are two reasons to heed this advice.

First, the additional competition that has come from the liberalisation of aviation markets has always brought benefits both to consumers and market participants and any regressive attempt to raise competitive barriers would negate these benefits.

Second, legalistic attempts to use regulation to ward off competition betray the wrong kind of mindset. Such thinking is likely to lead to ever decreasing defensive circles. Airlines that embrace the catalytic benefits of competition not only to stimulate internal change, but also to take advantage of external opportunities, are far more likely to build long term success.

Many more airlines have got into deep trouble by being protected than have those who have operated in highly competitive markets.