Norwegian Air Shuttle narrows its 1Q2015 loss thanks to lower fuel, but it's still a heavy loss

Norwegian narrowed its losses in 1Q2015, the first quarter in over a year when its adjusted operating result improved on a year-on-year basis. This was achieved as growth in unit revenue was higher than growth in unit costs although the loss was still its second highest first quarter loss.

Moreover, the containment of unit costs was entirely due to lower fuel prices, whereas non-fuel unit costs increased. Norwegian can point to costs related to a pilot strike as contributing to this, and adverse currency movements also hurt its result, but it does underline the need for cost efficiency improvements.

Meanwhile, Norwegian is still awaiting a definitive decision regarding its Ireland-registered subsidiary Norwegian Air International's US foreign carrier permit application. Approval would be positive for labour productivity on its long haul network. As the US DOT continues to drag its feet, Norwegian may soon be forced to consider alternative plans.

Adjusting for the item 'Other losses and gains', which do not reflect the underlying operating performance of the business, the adjusted operating result was a loss of NOK725 million (EUR83 million), 18% narrower than the equivalent loss a year earlier. This was still a very heavy loss (a margin of loss of 18.0% and Norwegian's second biggest 1Q loss), but a welcome reversal of the declining year-on-year trend in adjusted operating profit seen in every quarter of 2014.

ASKs up 6.7%, deliberately slower than 2014 and also muted by strike action

Norwegian increased its ASKs by 6.7% in 1Q2015, considerably slower than the 35% growth recorded in FY2014. Growth in 1Q2015 was adversely affected by an eleven day pilot strike in Mar-2015 (ASKs fell by 1% in the month), particularly in Norway and Sweden, but Norwegian had previously planned ASK growth of just 5% in FY2015. Most of the ASK growth achieved was on the long haul network and in Norwegian's new bases outside Scandinavia. Average sector length grew by 10%.

Passenger numbers increased by 2% and RPK growth was 15%, with load factor up 6 ppts to 83%, Norwegian's best ever first quarter load factor figure. Load factor gains were achieved across all three months, although, paradoxically, the strike action helped March to the highest year-on-year gain in load factor.

The industrial action by pilots was the result of a dispute over working conditions and group structure, including Norwegian's separate operating subsidiaries employing pilots in each of the three Scandinavian countries. The strike led to 2,000 flight cancellations and a reduction in passenger numbers by 190,000 in Norway and Sweden. CEO Bjorn Kjos told Dagens Næringsliv that there was no longer any adverse affect on bookings as a result of the strike action. 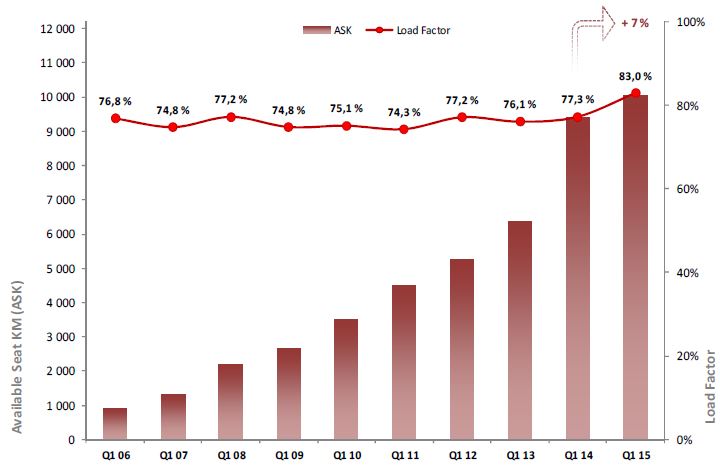 By network, revenue growth was concentrated entirely on international routes (up 21%), while domestic revenue fell by 5%. Domestic revenue's share of the total fell to 24% in 1Q2015 from 29% a year earlier.

Passenger revenue per ASK (PRASK) grew by 4%, with a 3% fall in yield per RPK more than offset by the increase in load factor. The strength of ancillary revenue helped to push growth in total RASK even higher (up 6%).

The increase in RASK is a welcome reversal of the falling trend of 2013 and 2014, when annual figures dropped by 8% and 7% respectively. However, much of the increase in 1Q2015 was due to the weaker NOK against EUR and other currencies.

Total operating costs excluding other gains/losses increased by 7.4%, slightly faster than ASK growth. However, non-fuel costs grew by 18.4%, considerably faster than capacity growth, while fuel costs fell by 19.6% thanks to lower jet prices. According to CAPA calculations, Norwegian's costs would have been NOK336 million (EUR40 million) higher in 1Q2015 if fuel cost per ASK had remained at the same level as 1Q2014. This accounts for considerably more than the improvement in operating profit year-on-year.

Labour costs, the biggest category after fuel, increased by 4.8%, less than ASK growth and also less than the 6% growth in average man-labour years. Increased costs from additional staff at new bases were offset by productivity gains and the increased mix of long haul in the ASK growth.

CAPA calculates that Norwegian's operating cost (excluding other gains/losses) per available seat kilometre (CASK) increased by just under 1% year-on-year in 1Q2015, less than the 6% increase in RASK noted above.

However, this was entirely due to lower fuel costs and ex fuel CASK grew by 11%. If we subtract the NOK110 million (EUR13 million) of extra costs associated with the strike in 1Q2015 and NOK19 million (EUR2.2 million) of extra costs related to long haul wet leases, ex fuel CASK was up almost 10% (also adjusting the prior year figures for one-off long haul disruption costs). The weakness of NOK also contributed to higher CASK in the quarter.

1Q2015 profit improvement breaks the pattern of 2014, but mainly thanks to lower fuel costs

Looking at the quarterly performance of RASK and CASK since 1Q2014, we can see that 1Q2015 is the first quarter in this period when RASK growth has outpaced CASK growth. However, as noted, this was largely thanks to lower fuel costs

Typically RASK and CASK both fall as average trip length increases. The chart highlights the seasonal weakness of the first quarter, when RASK is below its annual trend line and CASK is above its trend line. RASK weakness in 1Q2015 reflects seasonally weaker demand than in the rest of the year. The higher CASK of 1Q2015 reflects lower levels of capacity than in the peak season, while fixed costs are not very different from peak season. The chart also illustrates that it is normal for CASK to be higher than RASK in 1Q2015.

The encouraging aspect of the chart is that RASK in 1Q2015 returned almost to its trend line after a very weak performance in 1Q2014. However, CASK remained almost at the same level as 1Q2014, whereas the increased average trip length might have been expected to lead to lower CASK. Moreover, the chart highlights the sharp increase in ex fuel CASK and its large divergence from its annual trend line. 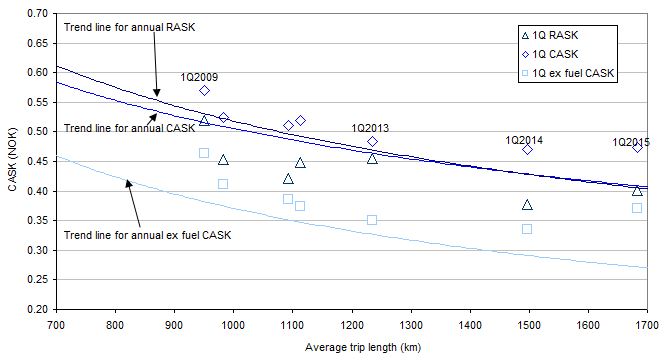 2015 should benefit from lower fuel costs

Norwegian still plans 5% ASK growth for 2015, with long haul driving this growth. It has not changed its target for FY2015 unit cost to be down by 5% to 7% year-on-year, in spite of the strike impact in 1Q2015, but (as CAPA observed previously) this will be due to lower fuel costs.

The narrower loss in 1Q2015 is encouraging. Lower fuel costs, and the greater maturity of long haul routes and the new European bases should see it return to FY2015 operating profit. Nevertheless, Norwegian still needs to make significant progress in lowering ex fuel unit costs if it is to generate sustainable profits in the long term.

Norwegian is still awaiting a definitive decision regarding Norwegian Air International's US foreign carrier permit application. This would be positive for labour productivity on its long haul network as it would allow greater flexibility in the use of crew.

Norwegian has been frustrated by the lack of progress with processing its application and faces a deadline on the duration of the current temporary arrangements, under which NAI effectively wet leases 787 aircraft to the parent company with approval from Norway's authorities.

Norwegian is filing for a UK AOC under which it could restart the US application. This might be seen as more acceptable to the US, since Norwegian has significant UK-based operations, whereas it does not fly out of Ireland. A UK AOC would also give preferential traffic rights to countries such as India. It is also thought to be considering registering a Spanish AOC.

The time for excuses is over

Long haul start up problems have weighed on Norwegian's profitability over the past couple of years and the pilot strike in 1Q2015 was a further drag on its route to better results. For these reasons, perhaps it is still not possible to gain a clear view of how Norwegian's business is performing. Nevertheless, as CAPA said in our analysis of the airline's FY2014 results, the time for excuses is over.