Norwegian Air (+6.5%) continued to perform well in the marketplace and on the exchanges. Air Berlin (-7.5%) meanwhile, hurting too from the general malaise in Europe headed the other way as airlines reported their March traffic figures. Vueling shares were up another 3.0%, but Ryanair (-4.5%) and easyJet (-4.3%) were each weaker.

Norwegian operates in all three Scandinavian markets and in Poland. It has been focusing recently on rationalising its Swedish presence, causing steady load factors but a substantial traffic decrease in that market.

According to Norwegian, yield for the month in the still-smaller Swedish market "is estimated at NOK 0.46 for the period (-32 %). The development in yield and cabin factor is to a large extent due to changes in the route portfolio, with new routes and 49 % longer average flying distance." This yield is against a unit cost of NOK0.51.

But, for the remainder of its much larger network, yields were considerably stronger, "estimated at NOK 0.65 for the period", a 10% increase.

Norwegian traffic highlights for Mar-2009 were: 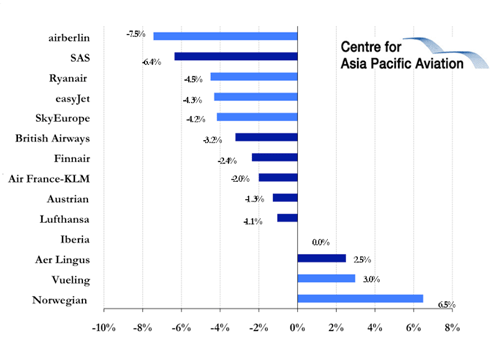 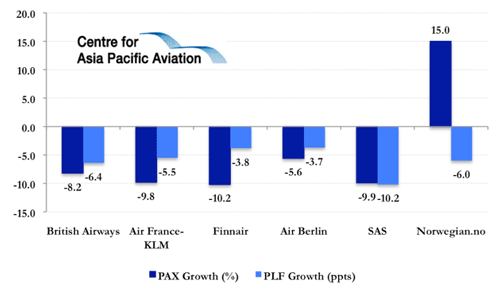 Air Berlin meanwhile, looking for a purchaser for part or all of its business, continues to contract. But the carrier did achieve an improvement in yield of 4.2%. German entrepreneur, Rudolf Woehrl, previously owner of dBA, who sold LTU to Air Berlin, would reportedly now be interested in buying it back - but presumably at a knock down price.

Air Berlin highlights in Mar-2009 were: