Norwegian resumed positive financial progress in 2015, returning to profit after two years of deteriorating results, including losses in 2014. The positive results of 2015 are welcome, but Norwegian's margins were unimpressive by comparison with other leading European LCCs. Even SAS achieved a higher operating margin in 2015.

Norwegian's profit slide coincided with the launch of its long haul network in 2013, and the recovery has coincided with the fall in fuel costs. This, together with a lack of separate data by network, makes it impossible to assess the relative profitability of the different parts of its network.

Nevertheless, Norwegian remains firmly committed to long haul, which it plans to grow at an average ASK growth rate of 40% pa to 2020, compared with 10% pa for short haul. Although not conditional on US approval of applications for traffic rights by its Irish and UK subsidiaries, its long haul growth options would be wider if 2016 became the year when it finally received this approval.

Operating margin still below Norwegian's peak, and below that of SAS and LCC rivals

Norwegian's operating result before other gains and losses was its highest ever, although the operating margin of 3.7% was less than half the 7.7% achieved in 2009, and below 2012's 5.7%. Comparing its 2015 margin with those of its two major Nordic rivals, it was better than the 1.0% operating margin reported by Finnair, but was slightly below the 4.1% posted by SAS (for the financial year to Oct-2015).

However, it was still way below the margins of Europe's most profitable LCCs. Ryanair achieved an operating margin of 22.4% and Wizz Air made 16.5% in calendar 2015, while easyJet's margin was 14.7% for the year to Sep-2015.

Norwegian's net profit was only its fourth highest, adversely affected by currency movements and changes in the value of fuel hedging instruments, as well as by higher interest costs.

Improved operating result in every quarter of 2015

Norwegian's return to profit helped its cash flow from operations to recover from less than NOK300 million in 2014 to NOK2,357 million in 2015, just below its highest ever level of NOK2,377 million, achieved in 2013.

However, its fleet expansion programme took its capital expenditure up to NOK5,189 million in 2015 – its highest ever, and more than double the cash flow generated by the business. In seven out of the past nine years it has spent more on fleet than the cash it has generated from operations. 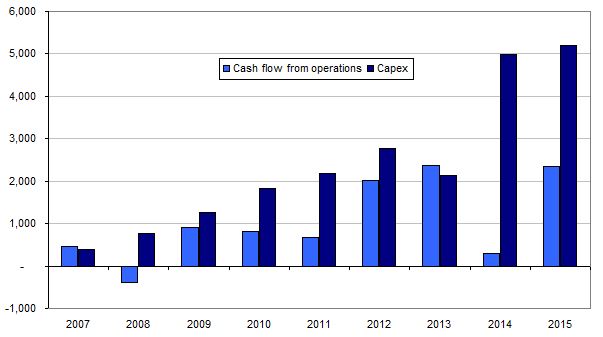 Norwegian's growing capex programme has resulted in increased indebtedness. At the end of 2015 gross debt was NOK19.6 billion, 47% higher than a year earlier. Its gross cash balance grew by 22% to close 2015 at NOK2.5 billion, equivalent to only 40 days of revenue (not much different from 38 days at the end of 2014). Net debt grew by 52% to NOK17.1 billion, almost six times its book equity. Adding capitalised operating leases at eight time annual rentals, adjusted net debt of NOK34.8 billion was nearly 12 times the book value of its equity. 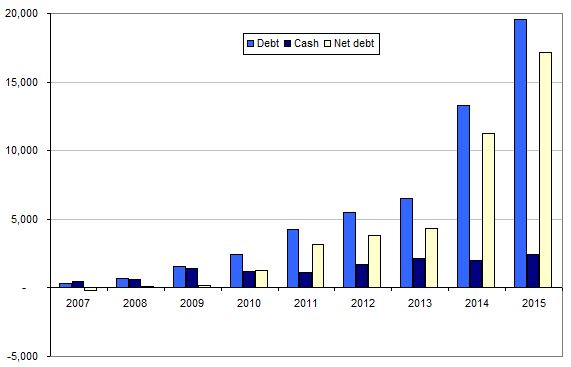 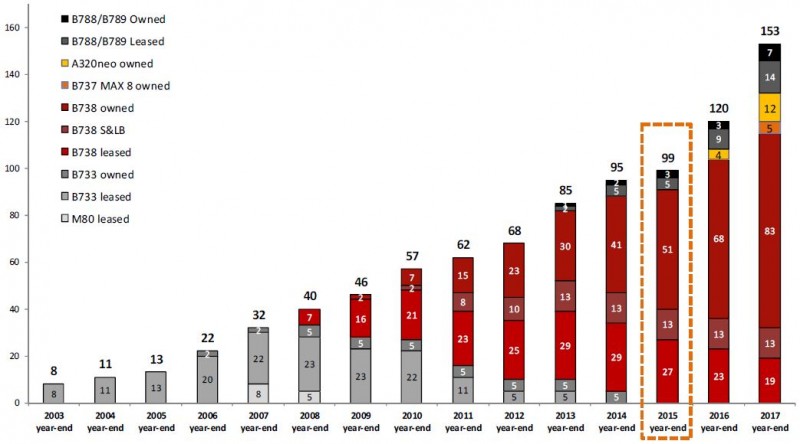 It has arranged redelivery payment financing for some of its future capital expenditure and is in negotiation and/or considering the possibilities in respect of the rest of it. Sale and leaseback is an obvious possibility that can be used to reduce gross capex to more manageable net figures, and Norwegian's financing options will be aided by its improving profitability. Its balance sheet structure would certainly not welcome any repeat of 2014's profit slump.

Norwegian grew its ASKs by 5.5% in 2015, much slower than the 34% increase of 2014. The growth that did take place in 2015 was strongly skewed to its long haul network, with short and medium haul broadly stable in ASK terms. Passenger numbers grew by 7.4% to 25.8 million and there was a 5% increase in average sector length.

Passenger load factor gained 5.3ppts to 86.2%, another record high for Norwegian. After hovering in a band around 78% to 80% for the best part of a decade, Norwegian's load factor has jumped by an impressive 7.9ppts in the past two years. 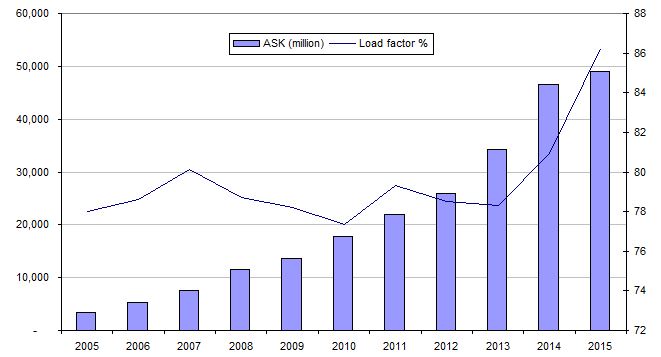 Revenue growth of 15.1% was faster than the 5.5% increase in ASKs. Passenger revenue increased by 13.8% but this was outpaced by ancillary revenue, which was up by 20.1% and accounted for 15% of revenue.

Ancillary revenue growth was driven primarily by the long haul network, where a greater level of 'frills' is demanded by passengers. Total ancillary revenue per passenger was up 11.8% to NOK127 million.

Passenger revenue per ASK grew by 7.9% and total revenue per ASK was up 9.1%, reflecting both higher yield and higher load factor. Currency movements also benefited RASK (weaker NOK versus EUR). 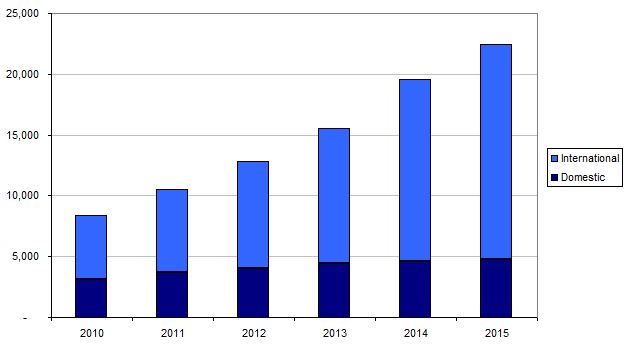 Operating costs, excluding other gains and losses, were up by 6.4%, a little faster than ASK growth, but slower than revenue growth. In spite of capacity growth, fuel costs fell by 18.0% due to lower fuel prices. Ex fuel costs (excluding other gains and losses) increased by 17.4%, faster than both capacity and revenue, largely as a result of currency movements (weaker NOK versus EUR and USD).

CASK, or total operating cost per ASK (excluding other gains and losses) was just up by 0.9% in 2015, and ex fuel CASK jumped by 11.3%. Fuel CASK fell by 22.2% and CAPA calculates that this reduction saved Norwegian NOK1,483 million in fuel costs in 2015. If it had paid the same fuel CASK as in 2014, its operating result would have been negative, all other things being equal.

RASK up more than CASK in 2015, but only because of fuel

Norwegian experienced an increase in both RASK (+9.1%) and CASK(+0.9%) in 2015. Both were boosted by currency movements, but its margin grew because RASK outgrew CASK.

However, this was entirely due to lower fuel prices and ex fuel CASK grew faster than RASK.

Norwegian's slowing of capacity growth made CASK reduction more difficult but longer sector lengths should bring lower CASK levels, all other things being equal. The challenge may be that all other things are not equal, and long haul inherently means higher unit costs on a sector length-adjusted basis.

*cost per ASK, based on reported costs at the EBIT level, excluding other gains/(losses)
Source: CAPA – Centre for Aviation, Norwegian Air Shuttle

In 2016, Norwegian is planning a return to more ambitious capacity growth, with an ASK increase of 18%. This will be composed of 12% short haul growth and 40% long haul growth.

The airline currently notes a slowing of the economy in Norway, where demand may also be affected by the government's plan to impose a new passenger tax from 1-Apr-2016. Norwegian is not yet clear on the details of how this tax will be imposed, but expects it to be NOK88 per passenger (approx. USD10). On a conference call to discuss the 2015 results Norwegian management told analysts that it was not sure how the tax would affect Norwegian. However, they said that the market outlook is more stable in other markets (and Norway's share of its business is decreasing).

On short haul, CEO Bjorn Kjos told analysts on a conference call to discuss the 2015 results that there were no plans to add significant new routes in any one particular market, but the focus would be on adding frequencies.

Norwegian has announced that it will establish a new base at Rome Fiumicino on 27-Mar-2016 with two 737-800 aircraft. Route details have not been announced, but northern European destinations are likely to feature strongly from Rome. Norwegian is currently the number 25 airline by seats at Fiumicino (source: OAG, week of 8-Feb-2015), where LCC competition against number one Alitalia is already fierce. Second ranked Ryanair and third ranked Vueling both have bases at the airport, while number four airline easyJet will continue to have a significant presence, in spite of closing its base in Rome.

Norwegian remains cagey about how it will achieve the planned 40% increase in long haul ASKs. In May-2016 Norwegian is to launch Boston services from Copenhagen, Oslo and London Gatwick, and a Gatwick-Oakland service. Beyond this, Norwegian has further long haul routes planned but has not yet announced details.

Its intention to add a service from Cork to Boston, operated by its subsidiary Norwegian Air International (NAI) has not yet come to fruition. It is still waiting for US Department of Transportation (DoT) approval of NAI's application for a US foreign airline permit. Meanwhile, according to Mr Kjos on the analyst conference call, "the Irish community is getting really angry" at the delay in launching this route.

Norwegian is also waiting for DoT approval of a similar application by its newer UK subsidiary Norwegian Air UK. Mr Kjos told analysts that he did not think the UK government would like to be "stepped on" by US Transportation Secretary Anthony Foxx. Norwegian currently operates to the US under its parent company's traffic rights, but its Irish and UK subsidiaries would give it more flexibility in expanding its long haul network from Europe to other regions.

Norwegian Air Shuttle renews its attempt to obtain US rights for NAI. Part 1: the arguments

Norwegian does not lack ambition

This year looks set to be yet another significant one for Norwegian. Acceleration of its capacity growth, with a particular focus on long haul, should be accompanied by further expansion of its profit margin thanks to lower fuel prices.

The new base at Rome, together with existing bases in London and Spain and those in Scandinavia, will further grow Norwegian's increasingly pan-European network. Rome may also help to feed its long haul routes from London and Scandinavia.

This year will also mark a major step in the development of its leasing subsidiary Arctic Aviation Assets, with the planned leasing out of its first four A320neo deliveries to HK Express. 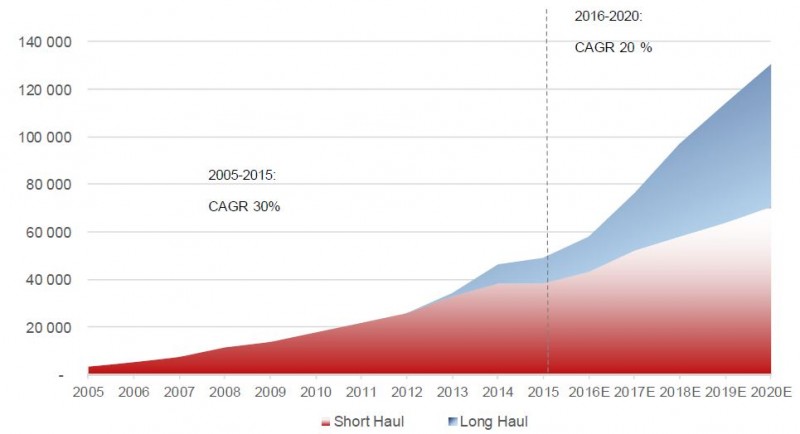 Whatever else might be said of Norwegian, it cannot be accused of a lack of ambition.