North Atlantic aviation: UK is largest, but others are growing fast

The Netherlands, Ireland and Iceland are relatively small aviation markets overall, but they punch above their weight on routes to the US, thanks to their airlines' hub strategies.

This gives Iceland the fastest seat growth rate to the US from Europe this year and the second fastest over the past five years. Greece has grown most rapidly on a five year view, albeit from a very small base, driven by US airline expansion and Emirates' fifth freedom entry.

Growth from Portugal has also been strong, thanks to a resurgent TAP Air Portugal. The Scandinavian countries have experienced rapid capacity growth to the US as a result of Norwegian's 2013 entry and SAS' consequent decision to expand in response.

This report ranks the size and growth of the markets to the US from Western European countries.

According to data from OAG, the UK's 13.5 million seats to the US in the 52 week period combining winter 2017/2018 and summer 2018 gives it a significant lead over number two Germany and third placed France.

In the same period, airlines from Germany have 6.3 million seats to the US, while France-US capacity is 4.9 million seats. Together, Germany and France's combined 11.2 million seats are less than the UK total. 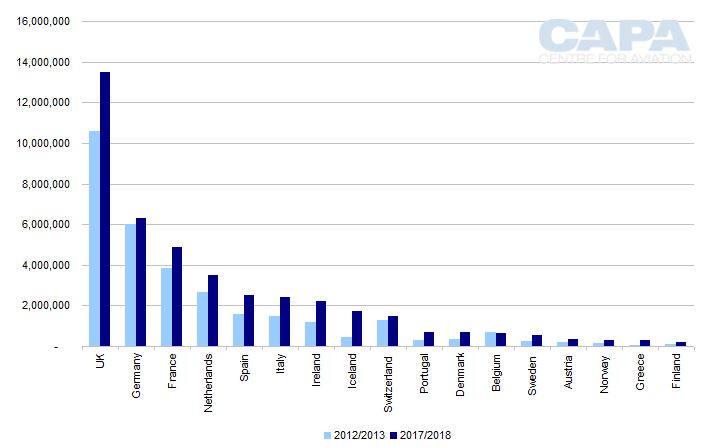 The importance of the Netherlands, Ireland and Iceland on US routes outranks their overall size as aviation markets

In fourth place is the Netherlands, with 3.5 million seats, punching above its weight given that the overall Dutch aviation market ranks as only Western Europe's seventh biggest market. This reflects the importance of sixth freedom traffic through KLM's Amsterdam hub.

Fifth placed Spain, sixth ranked Italy and Ireland, at number seven, all have between 2.2 and 2.5 million seats to the USA. Ireland is also placed higher on US capacity than its overall size would indicate (it is Western Europe's number 12 aviation market overall), thanks largely to connecting traffic carried by Aer Lingus.

This is also the case for Iceland: number eight on US capacity, with 1.7 million seats, but number 17 overall. Both Icelandair and WOW air carry a high proportion of transfer traffic via Reykjavik.

(Note that while Greece is geographically part of Central/Eastern Europe, it is included in this analysis since it has always been considered to be part of Western Europe from a political standpoint).

Three countries – UK, Germany, France – account for more than half of Europe-US seats

The 17 Western European countries with direct air links to the USA account for 95% of all seats between Europe and the USA.

The top five account for more than two thirds (69%) of Europe-US seats (Netherlands has 8% and Spain 6%).

European countries ranked by share of all seats between Europe and USA: 2017/2018* 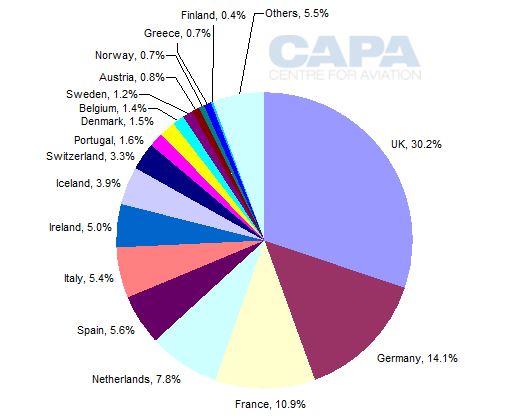 In the five years from 2012/2013 to 2017/2018 (again, these are 52 week periods combining the winter and summer seasons), the total number of seats between the 17 Western European countries and the USA has grown at a compound average growth rate of 6.2%.

Greece has been the fastest growing individual European market to the USA, with compound average growth of 34.7% pa, although it remains a very small market. This growth has been the result of United's entry in 2016 and Emirates' fifth freedom entry in 2017, in addition to expansion by Delta and American.

Iceland, with a CAGR of 32.1% pa, has enjoyed the second fastest growth over the past five years, mainly driven by Icelandair and WOW air's connecting strategies and also boosted by American and United's 2018 entry. Iceland is the fastest growing in 2017/2018 versus 2016/2017, with a 32.8% increase in US seats.

Portugal's five year CAGR is 21% pa; the Scandinavian countries have grown at 14%-16% pa

TAP Air Portugal's revival under new private sector ownership has been the main driver of a 21.1% CAGR in Portugal-USA capacity over the past five years. Portugal's second airline, SATA International, has also grown. From the US side, United has expanded significantly and Delta entered in 2017.

This has been stimulated by Norwegian's long haul low cost launch in 2013 and SAS' expansion in response, while US carriers have reduced their presence.

For Ireland, growth has mainly been driven by Aer Lingus and its strategy of connecting points in the UK and other European countries to US destinations. This has been boosted by the expansion of American, United and Delta, Norwegian's entry in 2017 and the fifth freedom entry of Ethiopian Airlines in 2015.

The growth in Austria-US capacity over the past five years is all due to the sole operator Austrian Airlines, which expanded significantly in 2014, but which is contracting slightly on US routes in summer 2018.

Finnair's long haul expansion has driven the capacity growth on Finland-US routes (Finnair is the only operator).

Italy's 9.9% pa growth has been driven mainly by American's expansion, supported by United's growth in 2015 and Delta's growth between 2014 and 2016 (since partially reversed).

Steady growth from Alitalia, Air Italy's expansion since 2015, Emirates' fifth freedom entry in 2013 and Norwegian's 2017 entry have also contributed (the latter pushing growth this year up to 16%).

Spain's 9.7% pa growth in seats to the US over the past five years is due to significant expansion from a small base by United and Air Europa, steady growth by Iberia and American Airlines, and Norwegian's entry in 2017 (growth this year is also 16%).

US capacity from Netherlands, UK, France, Switzerland, Germany and Belgium has grown below market average rates

The remaining six countries have grown more slowly than the total market in their seat capacity to the US over the past five years. Perhaps not surprisingly, these include the four biggest markets.

The Netherlands' CAGR in seats to the US is 5.5% pa, with most of the growth coming from KLM in 2013 and 2014 and a small amount of growth from market leader Delta. American has grown more rapidly, but from a very small base. Norwegian entered in May-2018 but remains very small in this market.

Growth from the UK to the US has averaged 4.9% pa, but this is still a reasonably healthy growth rate given the size of this market. There has been growth from British Airways, Virgin Atlantic (mainly in 2015), American Airlines and, in particular, Norwegian (which entered in 2014) and Thomas Cook Airlines. Primera Air's 2018 entry has also made a small contribution. However, United has reduced capacity since 2013 and Delta has reduced since 2014.

Capacity from France to the US has grown at an average of 4.8% pa. Air France has only grown very cautiously, reflecting Air France-KLM's reluctance to invest in its growth while its financial results are weak.

Its SkyTeam partner Delta has grown steadily and United grew in 2014-2016, before cutting in 2017 and growing again in 2018. Norwegian entered in 2016, and the 2018 entries of Primera Air and Level are making a small contribution. American has reduced France-US capacity in 2018.

Average growth from Switzerland to the US has been 2.7% pa. Leader SWISS and its Star Alliance partner United have expanded, while Delta has kept capacity flat and American has reduced capacity since 2016.

Capacity from Germany has grown at an average of just 0.9% pa. Lufthansa and its Star partner United have grown modestly, as has Delta; Condor has grown more rapidly from a small base over the past five years and Eurowings has grown even faster from a smaller base since entering US markets in 2016.

Belgium-US capacity has fallen over the past five years

Belgium is the only market where US capacity has dropped over the past five years, by an average of 1.8% pa.

Growth by Star's United and Brussels Airlines and the entry in 2014 of TUI Airlines Belgium has been more than offset by the 2016 withdrawals of American and fifth freedom operator Jet Airways. 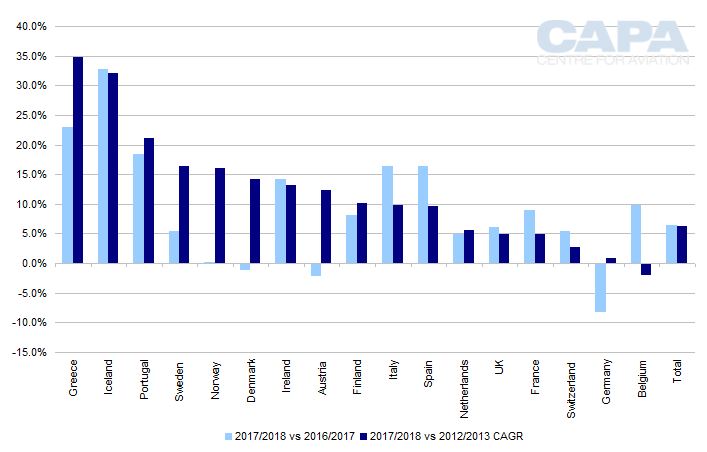 This report gives a top down overview of markets to the US from Western European countries ranked by seat capacity and growth rates. It highlights the concentration of the Europe-US market on the big three nations UK, Germany and France.

It also demonstrates the ability of some smaller countries that have benefitted from their airlines' connecting strategies to build significant positions in this market.

Furthermore, this analysis illustrates the growing importance of new/disruptive competitors in Europe-US markets. LCCs, particularly Norwegian (and also WOW air, Primera Air and Eurowings), are boosting growth in capacity to the US from a number of European countries.

Moreover, albeit on a smaller scale, fifth freedom operators such as Emirates and Ethiopian have also stimulated growth in certain markets.

Western Europe-US is a market that has benefitted from a liberal bilateral agreement. Not unsurprisingly, smaller European countries have largely grown more rapidly to the US than their larger counterparts. The biggest market of them all, UK-US, faces a challenge to retain its importance post-Brexit. There could be surprises ahead in Europe-US markets.