The North Atlantic is the most important intercontinental region for Europe's airlines and more important to European than to North American airlines. The coronavirus pandemic's disproportionate impact on long haul routes has therefore been particularly punishing to Europe's long haul operators.

However, IATA monthly traffic data show that the North Atlantic was Europe's strongest long haul traffic region by Nov-2021, measured by the percentage change in RPKs from the same month of 2019, but it was still weaker than intra-Europe.

The North Atlantic represented 16.2% of 2019 ASKs for all airlines domiciled in Europe, making it more important to them than any other region outside Europe.

Of course, a number of leading European airlines focus only on short/medium haul and do not fly across the Atlantic, such as the low cost carriers Ryanair, easyJet and Wizz Air.

For those European airlines that actually operate in this market, the North Atlantic accounted for not far off a quarter (23.2%) of 2019 ASKs (analysis of the importance to individual airlines appears later in this report).

…and more important to European than to North American airlines

Moreover, European airlines have a greater proportion of ASKs on all long haul routes than either their North American or their Asia Pacific counterparts.

The North Atlantic is important to North American airlines too, but less so (at 12.5% of 2019 ASKs). For them, as for Asia Pacific airlines, intra-regional routes make up the majority of their ASKs.

European airlines had 43% of ASKs on long haul in 2019, compared with 24% for North American airlines and 20% for Asia Pacific operators (source: CAPA analysis of data from OAG Schedules Analyser).

Passenger traffic on long haul routes has – predictably – been weaker than on short haul routes from Europe during the COVID-19 pandemic.

For much of the first 12 months of the crisis Europe's two most important long haul traffic regions (Europe to Asia and Europe to North America) suffered the biggest drop in RPKs from 2019 levels.

IATA monthly data reported for Apr-2021 show that North Atlantic RPKs were still down by 89.8% compared with Apr-2019.

Only Europe-Asia, at -92.3%, was performing worse than the North Atlantic at that time.

Since Apr-2021 all regions from Europe have enjoyed improved passenger traffic trends, but the North Atlantic picked up much more strongly than Europe-Asia.

IATA data for Nov-2021 – the most recent available – indicate that the North Atlantic's RPK reduction versus 2019 had improved to -47.2%.

This compared with -83.4% for Europe-Asia and -51.9% for Europe-South America, making the North Atlantic the best performing long haul region in Nov-2021 (Europe-Africa was at -36.8%, but is dominated by traffic to/from North Africa and so, mainly not long haul).

Within Europe RPKs were down by only 33.4% in Nov-2021 versus Nov-2019, emphasising the more rapid recovery of short/medium haul traffic compared with long haul.

Note: preliminary data for Jul-2021 for some regions only.
Source: IATA, CAPA - Centre for Aviation.

Monthly traffic data split into separate route regions is not yet available for Dec-2021 and Jan-2022. Total traffic data for Europe show modest improvement from Nov-2021 to Dec-2021.

Traffic has typically improved more slowly than capacity throughout the pandemic as load factors have not yet recovered their pre-pandemic levels. Nevertheless, the shape of the recovery curves for traffic and capacity have been broadly similar.

Although more recent regional traffic data are not available, weekly seat capacity data are available right up to the current week (week of 07-Feb-2022).

According to data from OAG/CAPA for the week commencing 07-Feb-2022, the North Atlantic market has reached a level of 62% of seat capacity operated in the equivalent week of 2019.

This is considerably better than the 38% reached by the other major long haul route region, Europe-Asia. Nevertheless, it is still below the levels reached by all Europe's other international route regions.

Europe-Latin America is now at 82% of 2019 seat capacity, Europe-Africa is at 70%, while intra-Europe international and Europe-Middle East are both at 65%.

Route regions from Europe: percentage of seats of the equivalent week of 2019, as at the week of 07-Feb-2022

North Atlantic lagged total Europe for most of the pandemic…

The North Atlantic's weekly capacity as a percentage of equivalent 2019 levels was consistently below the percentage reached by total Europe capacity for almost all of the period since the COVID-19 crisis began in Mar-2020.

In Nov-2021 and Dec-2021 the North Atlantic closed the gap considerably.

Total Europe then dropped to just under 60% in the week of 24-Jan-2022 as concerns over the Omicron variant grew. 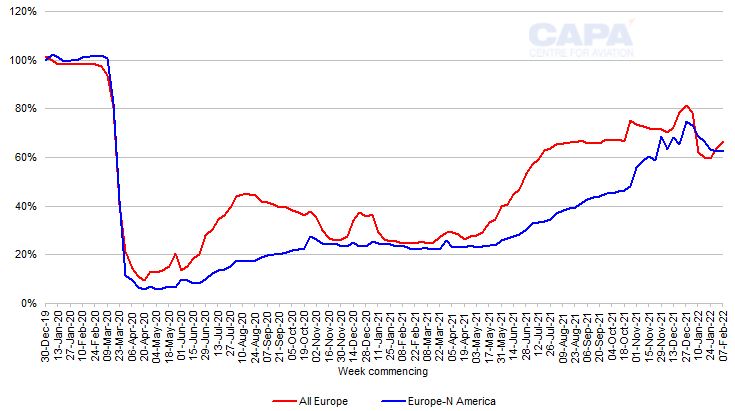 The North Atlantic is no longer consistently lagging total Europe

In the week of 07-Feb-2022 total Europe capacity has recovered back up to 66%, whereas Europe-North America is broadly flat at 62%.

The North Atlantic's recovery as a percentage of 2019 levels may continue to fluctuate below or above total Europe capacity. This reflects short term volatility in demand, caused by fluctuations in COVID case numbers and by governmental response in the form of imposing or removing controls on international travel.

Nevertheless, the period of persistent underperformance of the North Atlantic market compared with total Europe capacity may have passed.

This is welcome news to Europe's long haul operators, for whom the North Atlantic is a crucial market.