The number of carriers operating direct service between the US and India will decline to two – Air India and United – from 01-Mar-2012 when American Airlines ends its sole service to India, a daily service between Chicago O'Hare-New Delhi. The cancellation of the unprofitable routes comes as American rationalises its network as part of its bankruptcy filing. The carrier stated that the service is being cancelled due to the “historical financial performance of the route and its future outlook given the global economic climate and high oil prices.” The poor financial performance on the route, American's longest at 7484 miles, relates to the impact on yields of competitive pricing as American was able to consistently report high load factors on the route over the past 12 months.

American deployed 1771 weekly one-way seats on Delhi-Chicago O'Hare while Air India, soon to be the sole operator on the route, offers 2394 weekly seats, according to Innovata. American's route was launched in Nov-2005 after the US and India signed an Open Skies Agreement. 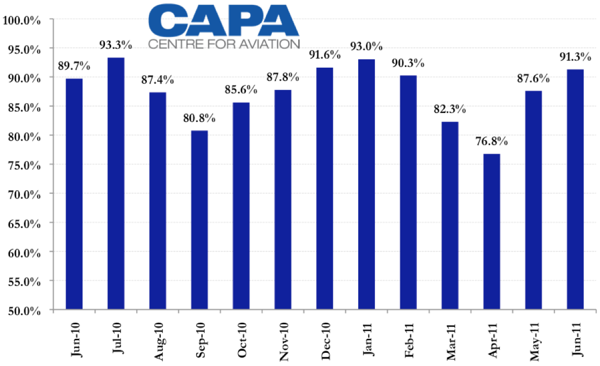 Air India is also reporting considerable losses on the route (although all of its international routes are loss-making), with a loss of INR3.28 billion (USD62.9 million) on India-Chicago operations in 2009/10, according to the Comptroller and Auditor-General's report, which noted that “the India/USA route was the single biggest factor adversely affecting Air India’s operations”, accounting for 41% of total losses. This is despite Air India having a lower cost of labour, although productivity and other inefficiencies affect its cost base.

American's withdrawal underscores the considerable yield pressures facing direct US-India operators from carriers with hubs in Europe and the Middle East. Network carriers from the Middle East are growing in the US, but still have a low access penetration rate compared to Europe. Between the US and Middle East hubs, Emirates operates 16,750 weekly one-way seats, with Qatar operating 6503 and Etihad 4540. Transferring through a Middle East hub does add noticeable travel time as Air India's direct Delhi-New York JFK has a flight time of 15 hours 40 minutes whereas flying Emirates through Dubai has cumulative flying time of 17 hours 20 minutes plus transfer time. An advantage, however, is the fact that Emirates serves 10 points in India whereas American only serves one. (American has onward connectivity in India with Jet Airways, but that too adds to travel time.)

Flying via Europe adds even less travel time. British Airways' flight between Delhi and New York via London has a total flying time of 16 hours 55 minutes, plus ground time, but with a greater number of Indian cities served. Fuel burn on ultra long-haul flights, even with efficient aircraft, can be considerably higher than a one-stop service since some fuel is required just to carry itself for 15-plus hours, increasing costs. With competitive pricing from one-stop carriers, especially those with lower cost bases and more efficient operations, American was unable to attract a premium for its service competing in a VFR-strong, and thus price conscious, market.

There has been a trend against non-stop US-India services. Jet Airways now routes its US-India flight via Brussels (it ended a brief service to San Francisco via Shanghai), and Kingfisher planned to enter the US market with non-stop services, but those have not eventuated. Delta Air Lines tried serving Mumbai three times – first from New York JFK, then Atlanta, then back to New York JFK – before withdrawing in 2009. (Last year the Air Transport Association [ATA], now Airlines4America, filed suit against the Export-Import Bank of the United States, claiming the provision of USD3.3 billion in loan guarantees to Air India beginning in 2006 was behind Delta's withdrawal. The ATA alleges that the financing has “allowed Air India to flood the U.S.-India market with extra capacity and crowd out competitors like Delta”. Air India's own losses, however, add another wrinkle.)

Another factor negatively impacting the profitability and viability of the route has been the close to 20% depreciation of the rupee against the US dollar in the last quarter of 2012, which has not only had a significant revenue impact on the operation, but is resulting in weaker inbound tourism levels from India to the US. According to the US Department of Commerce International Trade Administration, inbound travel from India to the US increased by only 1.9% in the nine months to Sep-2011, with a 5.4% decline in Sep-2011, following growth of 18% to 651,000 visitors in 2010 and 139% growth between 2003 and 2010. India is the 12th largest inbound market for the US (in the nine months to Sep-2011) while the US is the largest inbound market for India.

And then there were two: Air India and United

Left serving the direct US-India market are Air India and United. Air India operates the majority of seats with services to three US destinations: Chicago O’Hare, New York JFK and New York Newark (in addition to Toronto Pearson in Canada), all from Delhi. The carrier previously operated to US destinations from Mumbai but consolidated its US operations through Delhi upon the opening of Terminal 3 at the airport in Aug-2011. United, via operations inherited from merger partner Continental, serves Delhi and Mumbai via New York Newark. 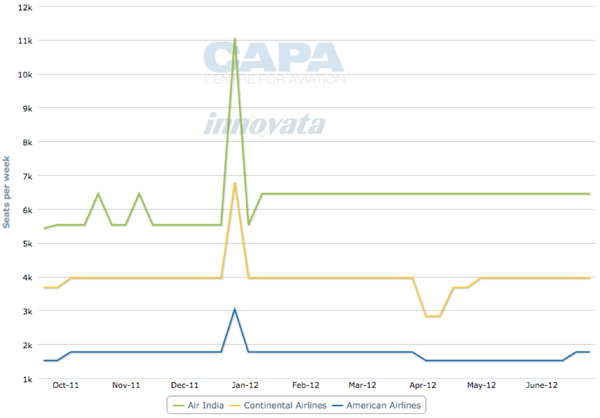