Myanmar Airways International (MAI) is pursuing expansion in North Asia with new services to Osaka and Seoul. The expansion increases the airline’s network to eight destinations and approximately doubles its weekly ASKs, pushing up its small share of Myanmar’s fast growing but highly competitive international market.

The expansion will position MAI to potentially benefit from rapid growth in Myanmar’s tourism sector. MAI, which became entirely privately owned in 2013, has not yet participated in the huge growth Myanmar’s international market has enjoyed since the country opened up in 2011.

MAI risks being squeezed out if it does not grow. But its upcoming expansion is also risky as MAI will compete in the Korea and Japan markets with larger foreign carriers and eventually Myanma Airways, a government-owned domestic carrier, aiming to launch services to North Asia in 2015.

MAI is one of nine airlines in Myanmar (soon 11 as two more are about to launch operations), but is the main international carrier. MAI is almost entirely an international operator and currently serves five destinations – Bangkok, Kuala Lumpur, Singapore, Guangzhou and Gaya in India.

Osaka Kansai will become MAI’s sixth scheduled destination and first destination in Japan on 8-Oct-2014. MAI plans to initially serve Osaka with three weekly non-stop flights from Yangon. On the return from Osaka to Yangon the flight will stop in Phnom Penh, giving Japanese tourists the opportunity to combine Cambodia with Myanmar.

The Phnom Penh stop marks another resumption of service to Cambodia for MAI. The carrier initially re-entered the Cambodian market in 2012 with a circle routing to Phnom Penh and Siem Reap but dropped Siem Reap in 2013 and suspended Phnom Penh earlier this year. 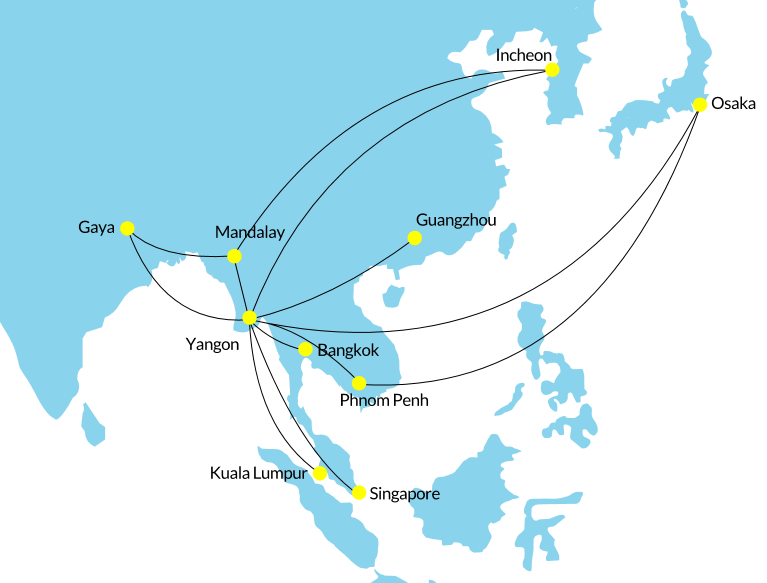 Seoul Incheon will become MAI’s eighth scheduled destination on 26-Oct-2014. MAI plans to initially operate five weekly flights to South Korea on a Yangon-Seoul-Macau-Mandalay-Yangon routing. Macau is a technical stop while Mandalay is part of the route as tourists visiting Myanmar typically combine Mandalay and Yangon.

The most ambitious international expansion is being planned at Myanma Airways, which operates regional aircraft on domestic routes but committed in early 2014 to leasing six 737-800s for delivery from Jun-2015. As CAPA previously outlined, Myanma Airways is planning to operate its future fleet of six 737-800, three of which are slated to be delivered in 2015, on new routes to North Asia. (Myanma Airways also has committed to leasing four 737 MAX 8s, which will be delivered late this decade).

MAI’s decision to launch Korea and Japan services in Oct-2014 can be seen as a competitive response ahead of Myanma Airways’ international launch and rebranding, which is expected to be completed before the carrier ventures into the international market.

Myanma Airways is not the only new competitor for MAI. While the prospect of more competitors to North Asia is not likely, several of Myanmar’s carriers have been looking to enter the regional international market. For example domestic turboprop operator Air Mandalay has acquired ERJ-145 regional jets which it plans to operate on international routes prior to the delivery of its recently ordered Mitsubishi MRJ90 regional jets.

The upcoming launch of services from start-ups FMI and Apex will add further pressure to Myanmar’s domestic carriers, none of which are believed to be profitable. FMI has acquired CRJ200 regional jets while Apex has leased ATR 72s. Both carriers will initially operate domestically but have international ambitions.

MAI traffic and market share have been on the decline

Regional destinations within Southeast Asia, in particular Bangkok, Kuala Lumpur and Singapore, have traditionally been MAI’s staples. Competition has already intensified on these routes over the past two years, driving down MAI’s market share.

Bangkok, Kuala Lumpur and Singapore accounted for over 90% of MAI’s traffic in 2013. But its traffic in all three markets dropped as competitors expanded.

Yangon-Guangzhou was launched by MAI in late 2010 and is also served by China Southern. MAI has served Gaya for several years and competes on the Yangon-Gaya route against Air India. Gaya is a popular religious pilgrimage destination for Buddhists and is typically served on a seasonal basis.

MAI currently accounts for about 9% of international seat capacity in Myanmar, according to CAPA and OAG data. Its share will again exceed 10% at the end of Oct-2014 after services to Korea and Japan are launched. 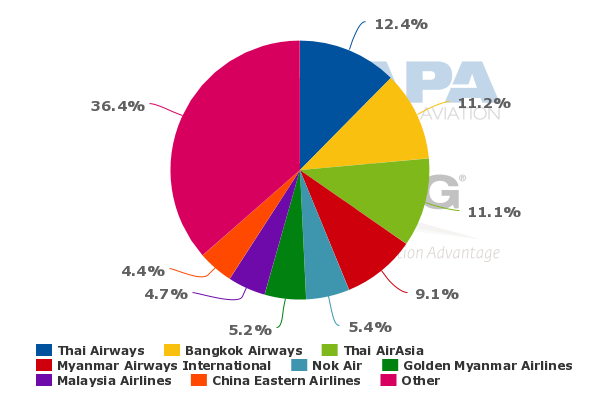 The two new routes will result in about a 25% growth in seats and a doubling in ASKs. Several foreign carriers are also adding capacity in Oct-2014 – although this is mostly seasonal adjustments for the peak season and in most cases does not represent entirely new flights.

MAI currently operates a fleet of three A320s and two A319s with an average age of 18 years, according the CAPA Fleet Database. As MAI has older model A320 family aircraft it generally lacks the range to operate non-stops from Korea or Japan to Myanmar without payload restrictions. Eastbound flights from Yangon can operate non-stop as they are about one hour shorter due to tailwinds.

ANA is currently the only carrier in the Myanmar-Japan market and operates a daily service from Tokyo Narita to Yangon using 767s. MAI will not compete directly with the Japanese carrier because at least for now it will only serve Osaka. (Additional Japanese destinations will be considered as MAI plans to focus on North Asia as it looks to further expand its international network.)

ANA offers connections to Osaka but several Asian carriers offer equally or more convenient connections in the Osaka-Yangon market. MAI could find it challenging to gain traction in the Japanese market as it is an unknown brand. Offering Mandalay as a stop could be an advantage but the technical stop in Macau is an inconvenience.

A few Asian carriers also already offer one-stop connections in the Osaka-Mandalay market. Most foreign carriers including ANA only serve Yangon but frequent connections are available between Mandalay and Yangon on all of Myanmar’s domestic carriers.

MAI will face more direct competition on the Yangon-Seoul route. Korean Air (KAL) and Asiana both launched services to Yangon in late 2012.

KAL currently offers one daily flight on the route (using A330s during the northern winter months and 737-800s during the summer) while Asiana operates only two flights per week (767s year-round). MAI will have about a 27% share of capacity from Yangon to Seoul during the peak winter season while KAL will have about a 56% share (once its flight transitions back to the A330) and Asiana will account for the remaining 17%. 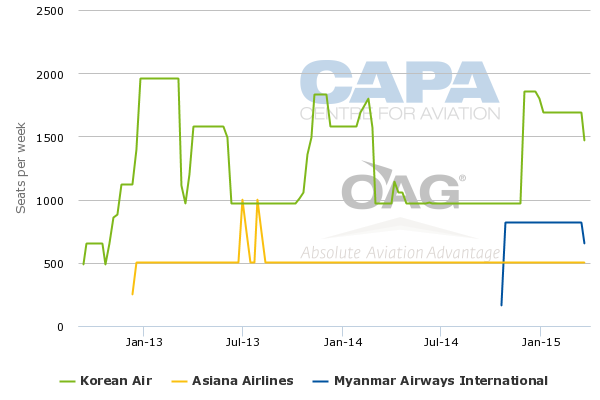 MAI has been codesharing with both Asiana and KAL, giving it some exposure to the Korean market. Competing with both carriers will be challenging as the Myanmar-Korea market consists almost entirely of inbound tourists. Asiana and KAL have the relationships with Korean agents and the scale to outmuscle new smaller competitors.

The stop in Phnom Penh on the Seoul-Yangon sector will give Korean travel agents the opportunity to combine Myanmar and Cambodia. But most passengers will likely fly through as tourists heading to Cambodia typically combine Cambodia with Vietnam or Thailand. The stop could be seen as an inconvenience as KAL and Asiana serve Yangon non-stop in both directions.

The future of its partnerships with Asiana and KAL could also be jeopardised as MAI launches its own Seoul service. As MAI is not a domestic carrier, Asiana and KAL could be better off partnering with another Myanmar carrier that does not compete on Seoul-Yangon and would be able to offer domestic feed.

Potentially losing Asiana or KAL as a partner would be a blow as MAI only has one other codeshare partner, Malaysia Airlines. MAI previously codeshared with Singapore-based Jetstar Asia but this partnership ended in 2013.

MAI needs to expand but growing successfully will be difficult

While the new routes to Japan and Korea will be challenging MAI needs to expand its network or risk being squeezed out entirely. MAI cannot afford to see its share of international traffic dip much below the 12% figure recorded in 2013. 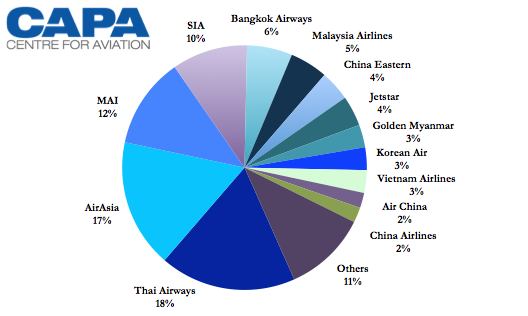 MAI faces a critical juncture. It needs to expand in order to maintain relevance and capture a meaningful share of its home market. Now is the time to make a move as other Myanmar carriers are preparing their own international expansion. If MAI does not resume expansion it could quickly lose its status as the largest Burmese international carrier.

But MAI needs to be careful. Foreign carriers are generally better positioned to serve most of Myanmar’s international routes.

MAI in the long run could be better off pursuing only modest international expansion and forging more partnerships with foreign carriers to cover other markets.

A close relationship or even merger with Air KBZ, which has quickly expanded since its 2011 launch to become one of the largest airlines in Myanmar's domestic market, would also help MAI’s position by providing domestic connections including to international partners. While Air KBZ and MAI are now both part of the KBZ Group the two airlines have not yet had any significant cooperation.

MAI faces an uphill battle as it tries to recapture market share lost to foreign carriers which have expanded in the Myanmar market since 2011 and as it faces intensifying competition with local carriers. Inevitably there will be casualties in the overcrowded Myanmar airline sector.

MAI will have to be successful at picking the right new routes and partners.