Three or four years of growth “lost” by European Airports in 2009: ACI EUROPE

ACI EUROPE, in a report entitled ‘Renewed Call for Competitive Relief Measures,’ announced that 82% of European airports have reported reductions in traffic so far this year. The association now expects that more than 105 million passengers will be “lost” by the end of 2009.

ACI EUROPE added that European airports have now seen “three years of growth lost”, as passenger traffic has fallen below 2006 levels in 2009, due to the “sharp and entrenched” reductions in air traffic. 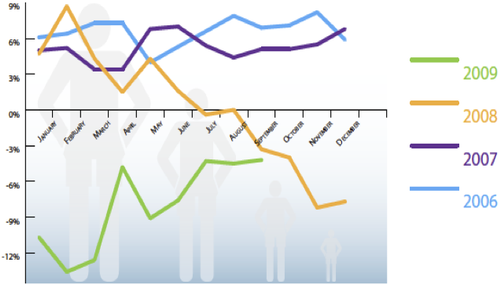 The decline has prompted ACI EUROPE to declare that European airports are “experiencing their worst ever trading conditions”, adding that “falling revenues resulting from declining passenger numbers and airlines’ capacity reductions, combined with higher capital costs, have severely deteriorated financial performance across the sector”.

15 consecutive months of passenger traffic contractions, but trend to “slow and gradual” recovery

The airport association added that preliminary figures for Oct-2009 confirm a trend towards a “slow and gradual traffic recovery in the Winter, mainly driven by low cost airlines”. 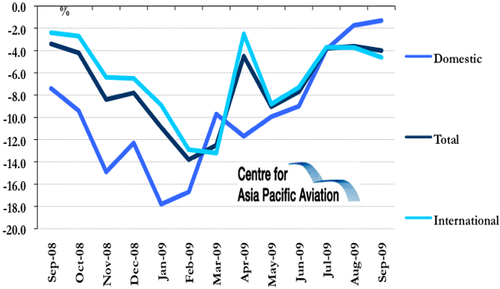 The most severely affected airports in Europe have been the secondary hubs and medium to large regional airports. Small regional airports are also “particularly vulnerable”, according to ACI EUROPE, due to their dependence on a limited number of key airlines and routes.

Major hubs tended to be comparatively less affected than other airports. The European airports body has attributed this to the strength of local markets and better performance from connecting traffic.

On a geographical basis, ACI EUROPE stated that airports in markets including Spain, Ireland, the UK and the Baltic States (with the notable exception of Latvia) have been “particularly hard hit”, reflecting the exposure of these national economies to the global crisis.

ACI EUROPE added that, contrary to what happened in the first months of the crisis, airports in Eastern and Central Europe are now more affected than those in Western Europe.

ACI EUROPE stated that it is seeing “encouraging” developments in freight traffic, which has been more heavily affected than passenger traffic since turning down in 2H2009.

Freight traffic was down in Sep-2009 by 7.8%, following an 11.7% contraction in Aug-2009. This is the smallest reduction over the past 11 months (prior to Aug-2009, Europe airports experienced seven months in a row of contraction below 20%), but international cargo traffic has still seen 13 months of contraction. 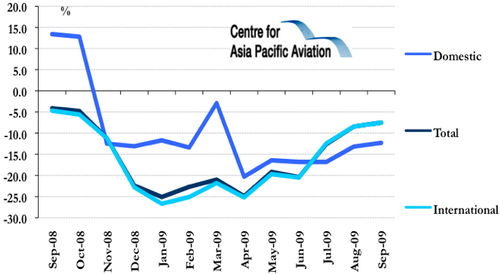 The unprecedented traffic declines, coupled with the financial nature of the crisis, have “severely impacted” the financial position of Europe’s airports, in a way the ACI Europe believes is “unfavourable” compared to other airports on a worldwide basis.

ACI added that the the combination of lower revenues and higher external costs has further added to the financial woes.

According to ACI EUROPE figures, EBIT for the top 25 European airports in 1H2009 was down by an average of 20-30%, with some airports experiencing reductions topping 95%. The situation is again “worse for regional and smaller airports", with some even "facing the prospect of bankruptcy”.

Overall, retail revenues were down by 10% year-on-year in 1H2009, although a “limited number of European airports” managed to increase retail revenues, due to development to their offering just prior to the crises.

While the revenue side has been severely hit, European airports have also seen external costs increase “substantially”, as airports suffer though increased capital costs, which typically account for 30-40% of total costs (by comparison, capital expenditure by airlines accounts for 15% of total costs, according to ACI EUROPE).

ACI EUROPE believes that “investors and credit rating agencies have held a more prudent view of infrastructure assets as a direct result of the crisis." Airports have been reclassified as more "volatile assets" considering increased exposure to competitive pressures, although their potential for low cost traffic development being given "increased consideration”.

Several airports have had their credit ratings downgraded, while others face negative outlooks, with this situation resulting in a reduction in the availability, and higher costs related to, external financing.

Further adding to the complexity of the issue, European airports have already confirmed the bulk of their capital investments - standing at EUR50 billion for 2008-2013 - as they prepare for a doubling of air traffic by 2030.

To make up for this, European airports have prioritised cost reductions elsewhere, most notably with staff reductions, which have reached up to 30% of the workforce.

Airports the good guys, not the bad guys

Airport charges among European airports in 2009 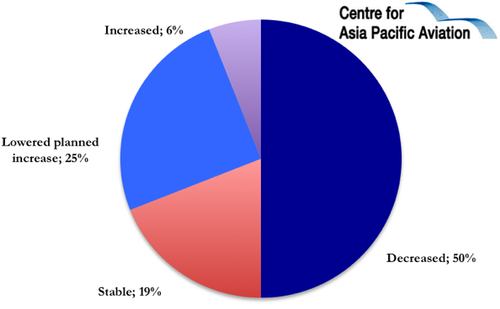 ACI EUROPE renews call for crisis relief measures: "Do not add costs for the industry"

ACI EUROPE, meanwhile, has renewed call for competitive relief measures for Europe’s airports, stating that the aviation industry has been “one of the hardest hit sector in Europe by the global economic and financial crisis”. ACI EUROPE lamented that “little has been done to help the European aviation system weather the crisis and secure its long-term viability”.

Director General of ACI EUROPE, Olivier Jankovec, added, “just like other sectors of aviation, airports are being hard hit and face both the prospect of slow air traffic recovery and structural market changes...We are simply asking for a true industrial policy for aviation – a policy which focuses on the competitiveness of the European aviation system and the unique role it plays in fostering economic growth by connecting people, places and businesses.”

He added “this means that the absolute priorities should be: 1 – Do not add costs for the industry through new regulatory initiatives and reduce existing costs, in particular by repealing unjustified taxes and providing public financing for aviation security. 2 – Incentivise traffic recovery through full liberalisation of aviation and more flexibility for start-up aid at regional airports. 3 – Keep focused on long term challenges and make sure that airports are financially incentivised to modernise and develop their facilities.”

Outlook: Air traffic bottoming out, but recovery unlikely before mid-2010

Despite traffic remaining depressed over the peak Summer period, ACI EUROPE stated that there are “tangible signals that the traffic downturn is bottoming out and that aviation may be heading towards a recovery”.

However, the group also warned that the pace of air traffic recovery over the European Winter is expected to “remain slow and gradual”, driven “almost exclusively” by LCCs.

ACI EUROPE is now forecasting passenger and freight traffic will decline 7% and 15%, respectively, in 2009, a slight upward revision of its previous forecast (from Jun-2009) of 8% and 16% reductions.

Looking forward to 2010, ACI EUROPE expects a sustained traffic recovery is “unlikely” before mid-2010, with the association predicting “marginal growth” for 1H2010 and a “more sustained rebound” for 2H2010.