Malaysia Airlines lost USD88.6 million in 3Q2009, but the underlying message was slightly better as the operating loss was a more modest USD21.7 million. However, unless things improve substantially in the medium term, the carrier is not well placed to return to profitability.

A key plank of Malaysia Airlines’ turnaround plan was to reduce costs as far as possible, by improving staff and route efficiencies and to focus on improving yields. This was highly successful at first, restoring profitability to an airline that looked to be about to collapse, as stern competition from both low cost airlines and its neighbouring full service operators proved more effective in the marketplace.

The yield improvement strategy worked well, even during the period of very high fuel prices last year. But, as the global financial crisis bit, premium markets evaporated. MAS was left to compete on price alone, with still a relatively high legacy cost base.

Nonetheless, compared with some of its competitors, MAS’ operating loss for 3Q2009 was not as bad as it could have been, at RM73 million (see USD figures below). This compared favourably with a loss of RM421 million for the second quarter. The main damage was caused by fuel hedging losses, of RM202 million, as the prices at which the carrier had hedged last year were significantly lower than this year’s. 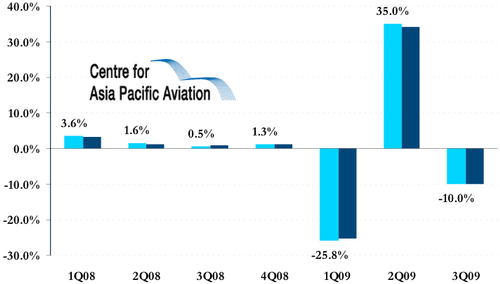 The main salvation for MAS in 3Q2009 came as lower prices and capacity reductions helped to generate higher load factors, as the following graph displays. Revenues were down an extraordinarily painful 30.0% on the same quarter last year, but with a 9.1% reduction in capacity (ASKs), a slight increase in RPKs meant a greatly improved load factor.

But even this improved load factor was not enough to overcome a 22.0% fall in RASK. 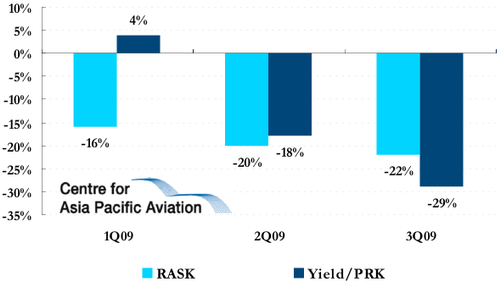 This fall in yield was probably softened a little, as the decision was clearly taken to withdraw from international routes - where premium traffic losses were greatest - and to concentrate more on domestic Malaysia, as can be seen from the following graph: while international capacity was cut back, domestic ASKS increased substantially in the quarter. 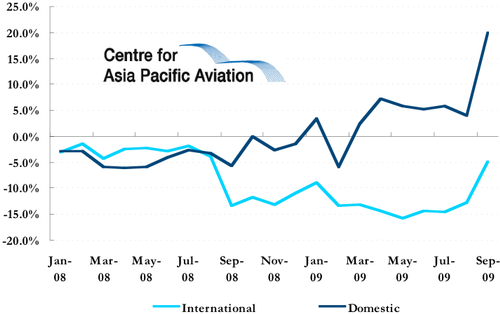 There are few better head-to-head comparisons possible of performance under different conditions than can be found in Malaysia.

With low cost airline AirAsia and full service carrier Malaysia Airlines operating head to head on short haul (and, increasingly, on long haul, as AirAsia X rolls out its intercontinental product), the contrasts are stark.

Profitability in high and in low cost environments

As can be seen from the following graph, the higher fuel prices of 2008 bit severely into AirAsia’s margins, while MAS managed to keep its head above water, with stiff fuel surcharges in a still-robust demand environment. The low cost model, relying on low yielding traffic, lost much of its competitive advantage as fuel cost occupied half of its total cost base. But as the tide turned, an almost mirror image developed, with low premium demand and reduced fuel costs. 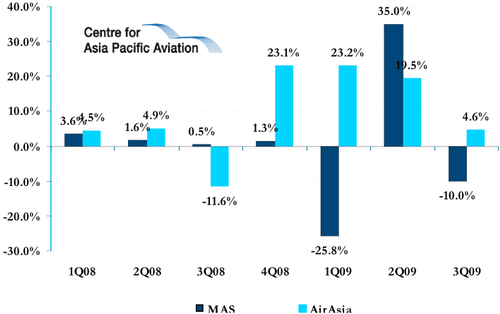 Other factors, such as, in MAS’ case, fuel hedging gains and losses, come into play in the net margins, but the picture is similar. The plunge in AirAsia’s profit at the peak of fuel prices in 2008 is the other side of that story. 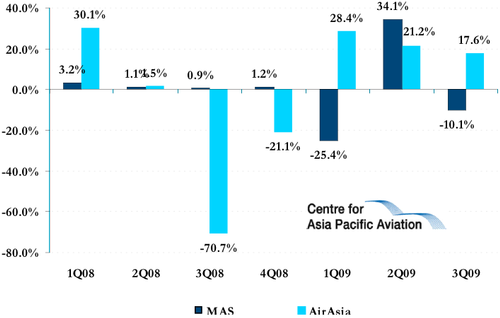 Part of an airline’s growth strategy in any changed conditions is involuntary – it is the direct result of the commitments it made to buy new aircraft in previous years.

Until 2008 there was fierce demand for new equipment and, with high prices, contracts with the manufacturers tended to be tight if an airline wanted to expand quickly. That means that, when things turn down, trying to avoid accepting orders when they fall due can be accompanied by very painful financial penalties. Hence new aircraft come on stream, like it or not.

But it is also a broad tenet that a genuinely low cost airline – and AirAsia is the lowest cost in the world – may well find its best market conditions in a soft-demand market. It is a combination of these two factors that has seen the Malaysian LCC expand while its full service competitor has contracted.

Thus, while MAS (until the last quarter) retracted by double digit figures, the LCC has been expanding passenger numbers at over 20% year on year. . 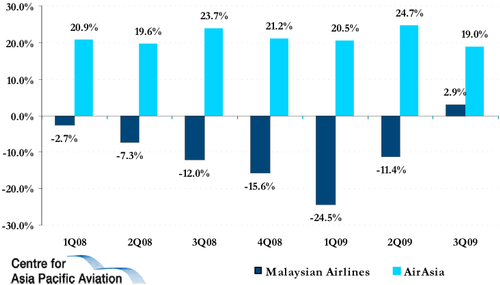 Meanwhile, despite AirAsia’s expansion, it has been able to maintain its high load factors. Fortunately for MAS there is still upside in terms of capacity, but obviously the carrier is not anxious to see yields further diluted – as would be necessary to fill the additional seats. 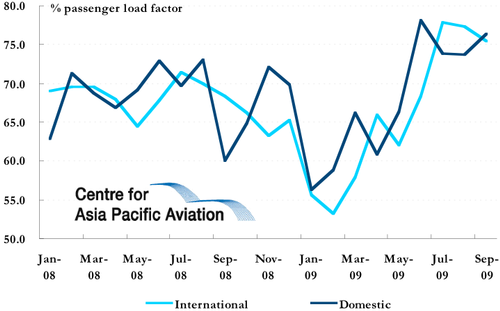 There are signs of an emerging recovery and MAS will be keenly awaiting evidence that those indications can be sustained. But there must be a question of whether the flag carrier is sufficiently well-equipped to survive through a future which is clearly going to be very turbulent and highly competitive.

The same concerns may not apply to AirAsia and, as its long haul arm, AirAsia X expands aggressively, it will be eating more and more of the flag carrier’s lunch.