AirAsia is preparing to establish a hub on the Malaysian island of Langkawi following a landmark deal which has resulted in a 70% reduction in charges – an indicator of the high importance placed on charges by the AirAsia Group. Langkawi will become Malaysia AirAsia’s sixth hub as services to Guangzhou and Hong Kong are launched.

Several other new international destinations are expected including Bangkok under a plan which will see at least five A320s based in Langkawi by 2020. Langkawi currently only has regular international services to Singapore.

The new Langkawi hub is part of an overall strategy by the AirAsia Group to focus growth on secondary airports. At the group’s original Malaysian subsidiary several new domestic and international routes from secondary hubs are planned for the next year despite a significant slowdown in fleet growth.

AirAsia initially announced plans in Mar-2015 to establish its sixth hub at Langkawi Airport. AirAsia has not yet set a launch date or begun tickets sales for any new Langkawi route. But AirAsia Group CEO Tony Fernandes told the 15-Sep-2015 CAPA LCC Airports Congress in Bangkok that MAA is now working to launch flights from Langkawi to Guangzhou and Hong Kong as a deal to reduce airports charges by about 70% has just been concluded.

Mr Fernandes added that AirAsia also aims to launch services in the coming years from Langkawi to Bangkok and five other international destinations – routes that would not have been viable without the reduction in charges. AirAsia has been fighting for lower airport charges at Langkawi for several years, believing the resort island had huge potential and with lower airport charges could narrow the gap with the nearby Thai island of Phuket. “By reducing the charges we invest, we’re able to stimulate new routes and an airport that was really earning no income is now going to earn a tremendous amount of income,” Mr Fernandes said. 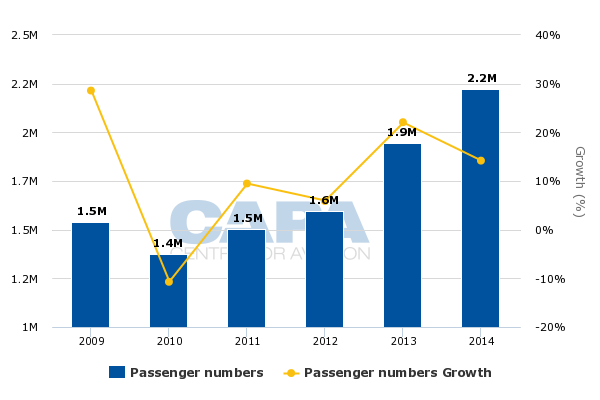 AirAsia Berhad CEO Aireen Omar told CAPA on the sidelines of the LCC Airports Congress that the opening of Langkawi is a milestone as it could not be pursued without airport support. She confirmed Guangzhou and Hong Kong will be the initial new destinations from Langkawi and MAA will assess how these new markets grow before adding more routes.

Ms Omar said the new Langkawi-Guangzhou and Langkawi-Hong Kong routes will initially be operated using A320s from existing bases. But over time AirAsia plans to start basing aircraft and crews at Langkawi with the expectation of basing five A320s at Langkawi within five years.

AirAsia has not yet set a launch date for Langkawi to Guangzhou or Hong Kong. Both routes are currently only available via Kuala Lumpur and are among 10 destinations in Greater China (including Hong Kong and Macau) that are now available from Langkawi using AirAsia’s Fly-Thru product. AirAsia currently operates 102 weekly flights from Langkawi including 77 to Kuala Lumpur International Airport (KLIA), 14 to Penang, seven to Singapore and four to Kuching.

AirAsia is already the market leader in Langkawi with about a 54% share of seat capacity. The Malaysia Airlines Group has about a 30% share followed by a 13% share for Lion Group Malaysian affiliate Malindo Air.

Malaysia Airlines currently has 49 weekly mainline flights from Langkawi to KLIA while its regional subsidiary Firefly has 31 weekly flights from Langkawi, including 21 weekly flights to Kuala Lumpur Subang and 10 to Penang. Malindo has 28 weekly turboprop flights on Langkawi-Subang and 14 weekly jet frequencies on Langkawi-KLIA, according to OAG.

Langkawi is currently served by three foreign carriers – Singapore-based SilkAir and Tigerair and China Eastern. The two SIA Group carriers each operate three weekly flights to Langkawi while China Eastern has two seasonal flights from Chegndu, according to OAG data. 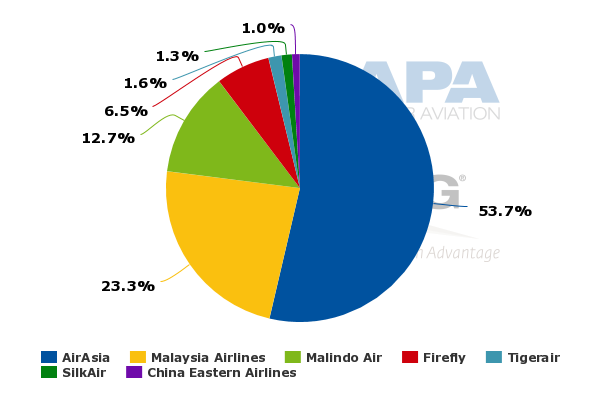 Langkawi will become the seventh AirAsia Group route from Hong Kong. Hong Kong is currently served by MAA from KLIA and Kota Kinabalu, by Thai AirAsia from Bangkok Don Mueang, Chiang Mai and Phuket and by Philippines AirAsia from Manila.

MAA is now working on trying to squeeze the two new Langkawi routes into its schedule and aircraft rotations. This is part of an initiative to add capacity without increasing the size of the carrier’s fleet.

The AirAsia Group currently has a fleet of 172 A320s, including the 80 aircraft at MAA, according to the CAPA Fleet Database. But as CAPA previously outlined the group’s current fleet plan now only envisions a fleet of only 166 A320s at the end of 2015 and 173 aircraft at the end of 2016. The group has been deferring deliveries, selling and subleasing its oldest A320s and returning some aircraft.

Ms Omar told CAPA that MAA still expects to add about three A320s to its fleet in 2016. But seat capacity should increase at a faster rate through more efficient scheduling and improved utilisation. MAA currently utilises its A320s an average of 13 to 13.5 hours per day.

Aircraft utilisation has already improved compared to 2014, when MAA was saddled with excess aircraft after planned aircraft sales by the group failed to materialise.

MAA needs to squeeze more out of its existing fleet as it is keen to continue growing capacity at a rate of about 7% to 10% per annum. Over the next year MAA is particularly keen to launch several new routes from secondary hubs as it sees opportunities in unserved markets. AirAsia is concerned if it does not pounce on such opportunities it will leave openings for competitors.

MAA will likely continue to expand its international operation at Johor as well as its other secondary bases. MAA currently operates seven international routes from its second largest base at Kota Kinabalu (Guangzhou, Hangzhou, Hong Kong, Jakarta, Shenzhen, Singapore and Taipei), two international routes from its Penang base (Medan and Singapore) and one from its Kuching base (Singapore). Indonesia AirAsia and Philippines AirAsia also serve Kota Kinabalu (from Bali and Manila) while Indonesia AirAsia and Thai AirAsia serve Penang (from Jakarta, Medan and Bangkok).

AirAsia'a portion of capacity allocated to KLIA will likely drop 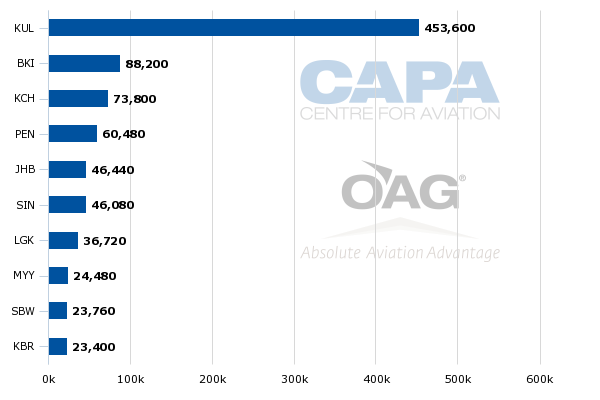 Growing secondary hubs and opening new unique point to point routes is part of an overall strategy at AirAsia Group.

As CAPA outlined in the first part in this series of reports on the AirAsia Group, Thai AirAsia (TAA) plans to open a new base at U-Tapao Airport near Pattaya in late Sep-2015 and add two new bases in 2016. The U-Tapao base will initially include four international routes, including three destinations in China, and one domestic route.

While secondary hubs will start to see a higher portion of international capacity, the AirAsia Group’s main hubs will continue to expand. For example MAA plans to continue adding over the next year new routes from KLIA to China and India while also looking at opportunities to increase capacity on existing routes following capacity cuts at Malaysia Airlines.

MAA is launching four weekly flights from Kuala Lumpur to Changsha at the end of Oct-2015. Ms Omar said the carrier is planning at least three more new routes to China as demand in the Malaysia-China market, which was impacted for over a year following the MH370 incident, is now recovering.

In India MAA launched three weekly flights to Goa in late Aug-2015. It also launched three weekly flights from Kuala Lumpur to Visakhapatnam in May-2015. MAA is planning to add at least one more destination in India 2015 as it sees opportunities to further increase its penetration of the Indian market given its higher penetration of the Chinese market. 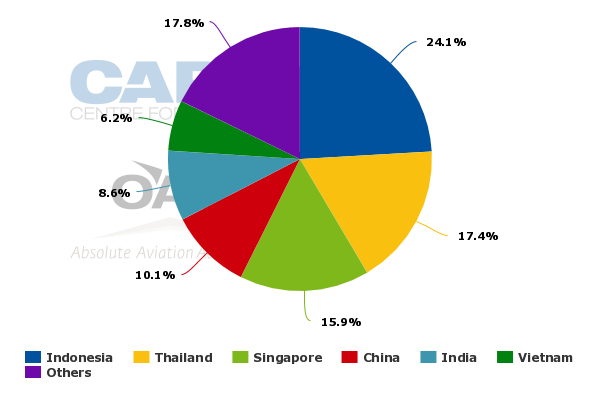 By ASKs China and India are number two and three after Indonesia. 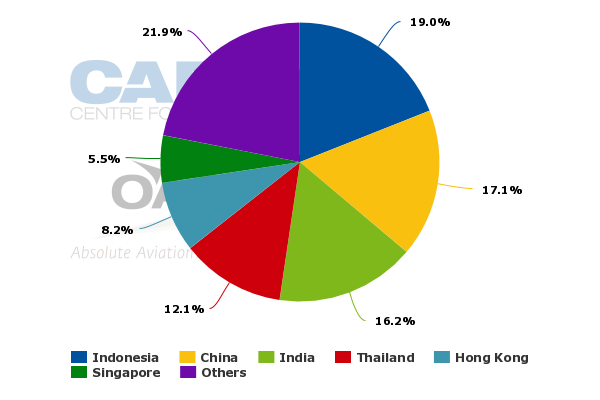 AirAsia’s position in the Malaysian market could strengthen further

Outbound travel from Malaysia has been impacted by devaluation of the Malaysian ringgit, which has lost about 20% against the US dollar over the past five months. But MAA sees Malaysians travelling more regionally, particularly to Indonesia and Thailand which remain relatively inexpensive destinations, and only journey to Europe and North American when necessary. MAA is also benefitting from growing inbound demand as it increases marketing efforts in countries that have strong local currencies.

MAA is also now starting to benefit from capacity cuts at Malaysia Airlines (MAS). The flag carrier has suspended services to three MAA destinations – Kochi, Krabi and Kunming. It also has dropped Male in the Maldives, which MAA is launching on 22-Oct-2015 with three weekly flights.

MAA has only increased capacity in a relatively small portion of markets that MAS has cut or reduced. But there should be opportunities to increase capacity in more markets over time as well as improve load factors and yields. Most of the markets MAS has reduced or cut have been oversupplied the last couple of years, pressuring yields.

MAA’s focus on expanding from secondary hubs and launching new point to point routes which are not served by any other airline is sensible as pursuing expansion on main routes would make it more difficult to improve yields.

Opening a new hub – as MAA is doing at Langkawi – always has risks and challenges. But with reduced airport charges testing out new international routes from the underserved Malaysian island is a gamble worth taking. If the new Langkawi hub succeeds it will unlock a new phase of growth for AirAsia’s Malaysian operation and reinforce the group’s new strategy of stimulating growth at secondary airports throughout Southeast Asia.