Short haul LCC group AirAsia faces intensifying competition in its original home market of Malaysia. Malaysia AirAsia (MAA) is no stranger to fierce competition and has the cost structure to fight back, but the price might be a dilution of recent yield and load factor improvements.

MAA has benefitted over the last year from the restructuring of Malaysia Airlines and an improvement in overall market conditions. However, the new Malaysia Airlines is starting to emerge as a tougher competitor, with a new, more aggressive pricing strategy. Meanwhile Lion Group’s Malaysian JV Malindo Air is again accelerating expansion, targeting several of AirAsia’s most lucrative routes.

Over the past two months CAPA has published a comprehensive series of reports analysing the new strategy of the Malaysia Airlines Group, Malindo and AirAsia X. In this report CAPA examines the outlook for Malaysia’s largest airline, MAA.

Malaysia AirAsia has launched nine new routes over the past year

Over the past year MAA has started up nine routes – all in the international market. The focus has mainly been on new point-to-point routes from secondary bases including Johor Bahru, Kota Kinabalu, Langkawi and Penang.

For the overwhelming majority of routes – 55 domestic and 23 international – capacity has been held steady. MAA’s overall seat capacity is up only marginally as the airline has focused on load factor and yield improvements while maintaining a disciplined approach to capacity and fleet growth.

MAA has been gaining market share while Malaysia Airlines has been shrinking as a result of its massive restructuring. The Malaysia Airlines Group (includes the regional subsidiaries Firefly and MASwings) captured 21.6% of the Malaysian market in 2015, compared with 24.3% in 2014.

Malaysia’s airlines ranked by annual passenger traffic (in millions) and market share: 2010 to 2015

Malaysia AirAsia passenger traffic was up 13% in 1H2016

Malindo has also been expanding rapidly in 2016, resulting in further market share gains. Malindo is on pace to carry 6 million passengers in 2016, which would represent a 62% increase over 2015 and give it almost a 7% share of the total Malaysian market.

Meanwhile, Malaysia Airlines Group (including regional subsidiaries) expects to carry only 15 million passengers in 2016, which would give it a 16% to 17% share of the total Malaysian market. MAA is on track to capture a 29% share of the total Malaysian market in 2016, and MAAX a 5% share. The combined 34% share for MAA and MAAX will be a record for the AirAsia/AirAsia X grouping.

The higher passenger traffic at MAA in 1H2016 has been driven primarily by load factor improvements. MAA’s seat capacity was up only 2% in 1H2016, while its seat load factor increased by 8.5ppts to 86.1%.

ASKs were up 11% while RPKs surged 22% – resulting in an 8.1ppt increase in passenger load factor to 85.6%. The higher ASK and RPK growth compared with seat capacity and passenger numbers was driven by more international flights outside Southeast Asia, particularly to China. Average stage length was up 7% in 1H2016 to 1320km. 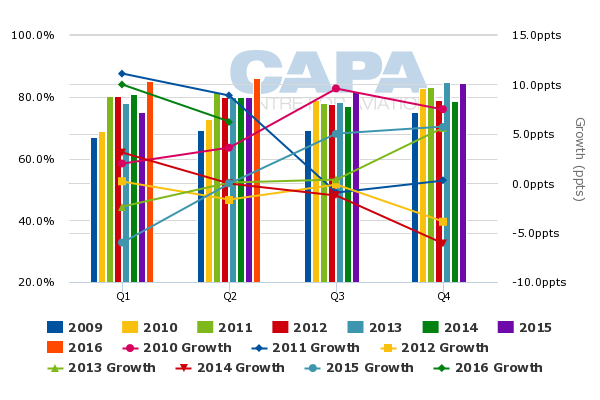 Revenues increased by 23% in 2Q2016 to MYR1.623 billion (USD405 million). Profits soared as costs were lower, driven by a 21% lower fuel expense despite only a 4% increase in fuel consumption.

MAA’s EBIT margin in 2Q2016 was an impressive 26%, compared with 17% in 2Q2015. MAA has consistently maintained one of the highest airline margins in Asia but had seen its margin slip in recent years as yields have come under pressure amid increasing competition. 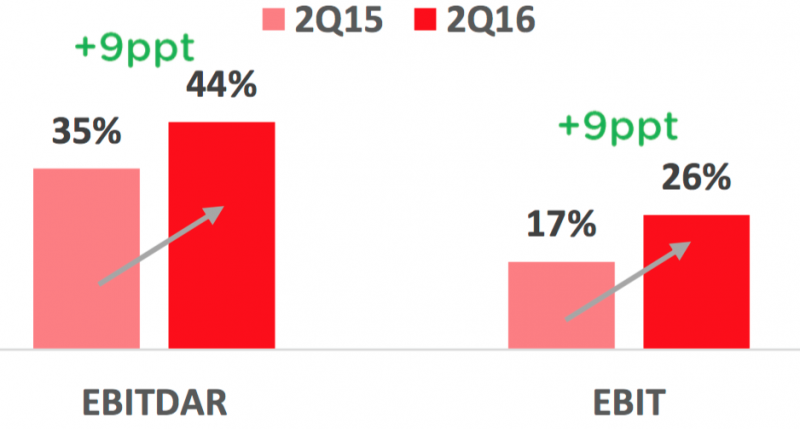 While yields have significantly improved in 2016, they have only recovered partially from previous levels. MAA’s average fare in 2Q2016 was still lower by 14% compared with 2Q2011, on a local currency basis. Average fares declined for four consecutive years from 2011 to 2015 as competition has intensified.

MAA’s RASK has still fallen by 20% compared with the high-level mark five years ago, on a local currency basis. On a USD basis its RASK has dropped 38% over the past five years.

MAA essentially enjoyed a brief reprieve in late 2015 and 1H2016 as competition weakened, but can hardly rely on the market maintaining the same disciplined approach to capacity.

Demand has also strengthened over the past year – particularly in the international market. The Malaysian market will likely continue to experience demand increases but at a rate below the projected capacity increases. Yields will again come under pressure for the remainder of 2016 and all of 2017 as competitors increase capacity and price aggressively.

Competition is intensifying in Malaysia

As CAPA highlighted in a series of analysis reports published two months ago, Malaysia Airlines has adopted a new much more aggressive pricing strategy in 3Q2016 aimed at improving its extremely low load factors – which were approximately 20ppts below MAA in 1H2016. Malaysia Airlines is planning to resume capacity expansion over the next year with a focus on China and India – markets MAA is also targeting.

As CAPA highlighted in a series of analysis reports published two weeks ago, Malindo is also again accelerating international expansion. Malindo has launched 11 new international destinations over the past year, seven of which are served by MAA (and one by MAAX). At the end of Oct-2016 Malindo plans to launch services to Chiang Mai and Phuket – another two of MAA's destinations.

Foreign airline competition is also intensifying: for example, VietJet entered the Malaysian market in Jun-2016. MAA previously was the only LCC on the Kuala Lumpur-Ho Chi Minh route.

MAA has been expanding its network with a focus on new unserved secondary routes. Seven of the nine routes it has launched over the past year are not served by any airline. One of the exceptions, Kuala Lumpur-Colombo, was transferred from MAAX. The other exception, Kuala Lumpur-Changsha, has limited nonstop competition from China Southern.

Of the nine new routes five are from secondary bases, including two routes from Penang (Ho Chi Minh and Yangon) and one each from Langkawi (Guangzhou), Johor Bahru (Guangzhou) and Kota Kinabalu (Wuhan). From its main Kuala Lumpur hub MAA has taken over services from MAAX – to Colombo and Male – and has launched Changsha and Jieyang in China. On 21-Nov-2016 MAA is launching four weekly flights from Kuala Lumpur to Luang Prabang in Laos – another route not currently served by any airline.

However, most of MAA’s capacity continues to be allocated to primary routes, which have become extremely competitive. Secondary and point-to-point routes are generally served less than daily and are typically not profitable, at least in the initial phases.

Over the years AirAsia has dropped several point-to-point routes; in some cases routes have been relaunched a few years later, only to be suspended again. MAA strategically has to continue to experiment with new routes, despite a relatively high failure rate.

The AirAsia Group is reportedly looking to accelerate deliveries in 2017 and could potentially take a total of 18 or 19 aircraft, instead of the current plan for only 10 aircraft.  AirAsia could use more aircraft in 2017 to support fleet growth across its portfolio.

Indonesia AirAsia and Philippines AirAsia completed restructurings in 1H2016 and are expected to be profitable in 2H2016, leading to a possible resumption of expansion in 2017. The AirAsia group is also launching a new affiliate in Japan in 2017 and is planning to accelerate growth in India to enable the launch of international services. (New Indian regulations now allow an airline to operate internationally once it has a fleet of 20 aircraft, regardless of age, as the prior rule requiring five years of domestic operations has been dropped.)

In Malaysia, AirAsia will likely need more aircraft to respond to new competitive threats and maintain its market share. After significantly growing its share of the Malaysian market in 2015 and 2016, MAA will not want to cede any of these gains.

Growth will be strategically necessary to keep up with an ambitious Malindo and a reinvigorated Malaysia Airlines.

However, yields and therefore profitability will again almost certainly come under pressure. This time MAA will not be able to push up load factors, which are already at record levels, or rely on a reduction in fuel prices.

The region is rife with "strategic" capacity growth as new entrants jostle for market position, but AirAsia has shown itself to be resilient in face of these challenges; as an incumbent it has now been through a period of over a year of rationalising its own capacity strategy.

The recent restored rational behaviour by its main domestic competitor Malaysia Airlines has offered a temporary reprieve from the destructive competition that characterised the period before its voluntary administration. But, along with an aggressive Malindo, Malaysia Airlines can now be expected to begin to increase its competitive positioning.

MAA and the group as a whole does however continues to deliver the world's lowest cost operation, at USD2.8cents per ASK, and a powerful brand across the Asian region delivers it a strong market advantage.

The one allows it to achieve greater margins than its competitors and the other enables utilisation efficiencies and higher load factors. In this respect AirAsia remains the benchmark for others to address.