Macquarie Airports' (MAp) shares tumbled 8.2% on Friday as the specialist fund revealed deep reductions in traffic across its portfolio.

Bristol Airport reported a 26.2% reduction in traffic, with volumes affected by severe snowstorms at the start of the month. Passenger numbers were 19% lower at Brussels, where India's Jet Airways has downgraded aircraft sizes from its European scissor hub. Copenhagen Airport's traffic slumped 18.7%, which MAp attributed to a "soft operating environment".

CEO, Kerrie Mather, stated that positive news included new Qatar Airways' services between Doha and Sydney, as well as a boost to Lufthansa Italia flights between Milan and Brussels. She commented, "that our airports are able to attract new routes and services in the current environment is evidence of the long-term attractiveness and excellent growth prospects of our airports under more normal conditions". 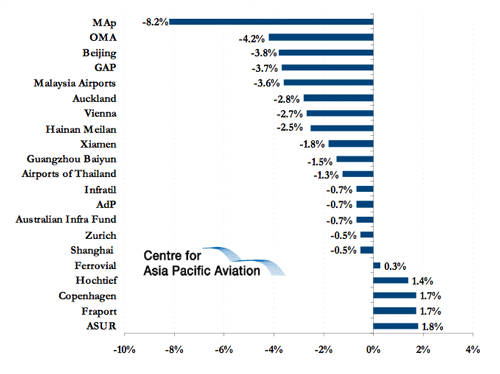