Traffic numbers at Sydney Airport in fell 0.8% year-on-year in Dec-08, including a 2.6% reduction in international traffic and a 0.6% increase in domestic traffic. Recent figures from the Qantas Group show the mainline operation's passenger numbers continue to fall, while low cost unit, Jetstar, is still reporting healthy growth.

Traffic was sharply lower at Copenhagen (-9.8%), Bristol (-12.7%) and Brussels (-9.0%) airports. Ms Mather stated, "the number of new flights commencing at Copenhagen over the coming months now significantly exceeds those lost as a consequence of the collapse of sterling". She added, "Ryanair has confirmed plans to double the size of its Bristol base from two to four aircraft, adding 12 new routes." 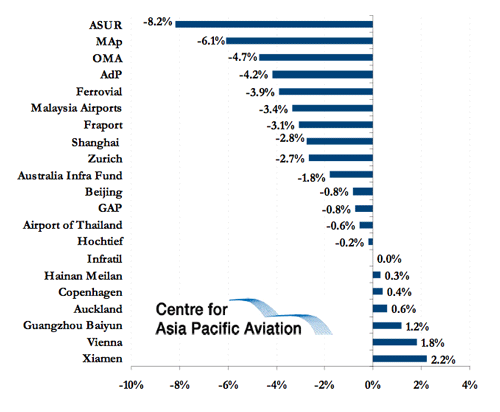