The Republic of Macedonia is set to see greatly increased low-cost carrier penetration in winter 2012/13 with the upcoming expansion by Hungarian LCC Wizz Air. Rather than simply increasing competition, the services will open up a wide range of new routes from the Macedonian capital Skopje.

Wizz Air announced earlier this month that it would launch six services from Skopje to Munich, Dortmund, Basel, Eindhoven, Malmo and Milan. The services will commence from the start of the winter 2012/13 schedule. The airline already operates to Skopje from London Luton and Venice Treviso, three times weekly and twice weekly, respectively.

The announcement by Wizz Air follows an international tender from the Macedonian Government, which aimed to attract European LCCs by offering subsidies to cover new services for the next three years. Macedonia currently has a LCC penetration rate of approximately 25%, mainly contributed by Turkish LCC Pegasus Airlines and Wizz Air. Other LCCs including Jetairfly and airberlin offer limited services to Macedonia.

Macedonia currently does not have an operational national carrier after the collapse of MAT Macedonian Airlines in 2009. In its wake, MAT Airways was established and unveiled plans to operate services to Rome, Barcelona and Prague. But the new MAT has yet to receive an Air Operator’s Certificate (AOC) from Macedonia’s Civil Aviation Directorate (CAD). In Mar-2012 the proposed start-up announced it would initially operate using Romanian carrier Alfa Air’s AOC but these plans have also not yet amounted to anything.

Remaining flag carriers in the other former Yugoslavian countries are also struggling, which has led to suggestions they should unite to secure their futures. Three of these carriers now serve Macedonia: Serbia’s Jat Airways, Croatia Airlines and Slovenia’s Adria Airways.

With the lack of a Macedonian carrier, the Turkish operator of Skopje Airport, TAV, tried to persuade Jat Airways and Turkish Airlines to base an aircraft at Skopje. After talks with these two carriers failed, the Macedonian Government issued the international tender to European LCCs.

Wizz Air responded and announced that it will dramatically increase its operations into Skopje with the launch of six new routes subsidised by the Macedonian Government. None of these routes are currently operated by any carrier.

Wizz Air will be joined by another LCC, Flydubai, which plans to launch Dubai-Skopje service by the end of 2012. This service will also be operated with the assistance of subsidies from the Macedonian Government until 2015. FlyDubai’s service will commence following the finalisation of the Macedonia-United Arab Emirates bilateral air services agreement, which is expected in Sep-2012, according to Macedonia’s CAD. 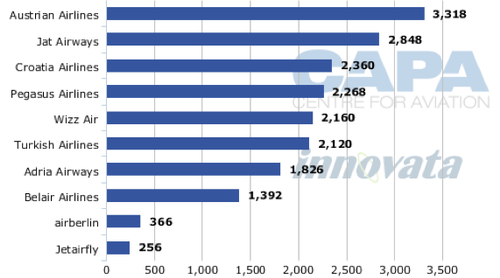 There are only two airports in Macedonia with commercial service. The second airport is located in the city of Ohrid, which is located just over 100km from the capital. While Skopje is served by 10 carriers, Ohrid is currently served by only two carriers – Jat and Jetairfly – according to Innovata data.

Both Jat and Jetairfly combine Ohrid and Skopje on a single route, with Jetairfly operating twice weekly service on a Brussels-Ohrid-Skopje-Brussels routing and Jat operating one weekly flight on a Belgrade-Ohrid-Skopje-Belgrade routing. Unlike Jat, Jetairfly has the rights to pick up local traffic on the short domestic hop but demand for domestic services in Macedonia is virtually non-existent given the small size of the country. 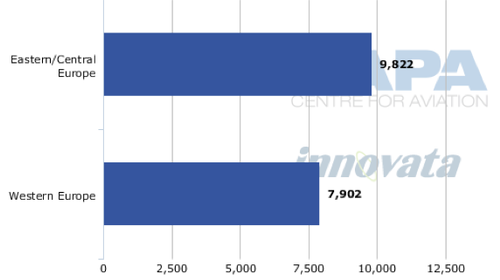 Meanwhile, FlyDubai’s entrance in the Skopje market will give the country its first service to the Middle East and its only route outside Europe. Combined the entrance of FlyDubai and expansion by Wizz Air will give Skopje 21 routes, a 50% increase compared to 14 destinations now served from the Macedonian capital.

As a result, winter 2012/13 will see a major expansion of services at Skopje. Considering winter schedules are usually significantly reduced in the Balkan region compared to peak season summer schedules, the success of the new routes may lead to even greater expansion by Wizz Air and other carriers heading into summer 2013. The expansion of LCCs could impact the existing full service carriers serving Macedonia but with the new routes being to new destinations, for now there will not be any direct competition.