Maastricht Airlines to launch in Mar-2013, mounting challenge to Ryanair

Maastricht Airlines is preparing to launch services in Mar-2013, becoming only the second operator at Maastricht Airport in the Netherlands after Ryanair. The new full-service regional carrier will be launching a challenge to Ryanair as it plans to attract both business and leisure passengers looking to visit key European centres.

The airline is targeting business travellers and those tourists who previously flew with Ryanair or travelled to other airports such as Amsterdam or secondary airports in neighbouring Belgium and Germany. Maastricht Airlines' sales and marketing manager Marjolein Peerboom says business travel is the airline’s main focus but the carrier will also try to attract “tourists looking to travel to other destinations from the Maastricht region”.

Maastricht Airlines plans to launch services on 26-Mar-2013 with a fleet of two Fokker 50 turboprops. It aims to expand the fleet to six Fokker 50s by the end of 2014.

The airline’s launch services will be to Amsterdam, Berlin Tegel and Munich. It also plans to connect Maastricht with other destinations including London, Paris and Copenhagen from 2014 and recently highlighted Moscow and Saint Petersburg as potential destinations.

Maastricht/Aachen Airport, located 10km north of Maastricht (Netherlands) and 17km west of Aachen (Germany), is an important freight airport in the region. In terms of passenger operations it traditionally has only been served by low-cost and charter carriers.

Maastricht/Aachen Airport handled 345,000 passengers in 2012 and expects this number to increase to over 500,000 in 2013 with the arrival of Maastricht Airlines and Ryanair’s growth. However the airport will continue to lose potential passengers who decide to travel by road or train to other international airports in Belgium and Germany that offer more connections.

The airport’s cargo volume fell from over 92,000 tonnes in 2011 to 75,000 tonnes in 2012 (an 18% decrease due to reduced volumes from China). The airport expects a slight recovery in cargo volumes in 2013. Cargolux, Royal Jordanian, Southern Air and Turkish Airlines all currently operate cargo services from Maastricht to European, African and Asian destinations.

Maastricht Airlines will automatically become the second largest passenger operator behind Ryanair at Maastricht/Aachen Airport when it launches operations. Ryanair currently provides around 8,300 weekly seats from the airport, all to western European destinations. Germanwings also served Maastricht from Berlin but dropped the service in Oct-2012, leaving Ryanair the only carrier serving the airport.

Ryanair opened Maastricht base in Dec-2012

Ryanair opened its 51st base and first Dutch base at Maastricht in Dec-2012, initially basing one aircraft at the airport. The carrier at the same time launched three new routes from Maastricht to Dublin, London and Venice Treviso, which it expects to deliver over 450,000 passengers p/a and sustain over 450 “on-site” jobs as Ryanair invests over USD70 million at the airport. 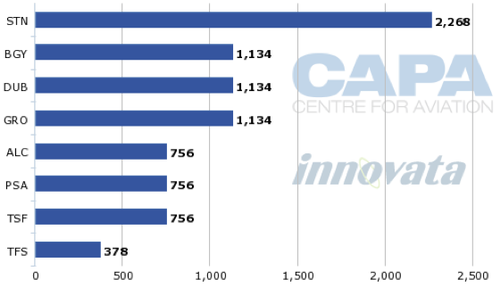 Services may be difficult to sustain due to ground transport options

While Maastricht Airlines will be the sole airline operating on its launch routes, they may be difficult to sustain due to the strength of ground transport options and alternative airports nearby. The airline’s domestic Maastricht-Amsterdam service will compete with road and train transport, with the surface journey taking around 2.5 hours compared to a flight time of around 35 minutes (plus transport to and from the airports). KLM previously served the route using Fokker 50s but it withdrew from the route within the last few years.

Internationally, Maastricht Airlines will have a fierce competitor in Ryanair which has a much lower cost base than Maastricht will be able to offer with its 50-seat Fokker 50 aircraft (compared to Ryanair’s 189-seat Boeing 737-800 aircraft). However, Maastricht Airlines’ initial routes will see it as the sole operator and the airline is targeting a different clientele. Maastricht Airlines’ plans to eventually serve London would see it more closely compete with Ryanair in the future.

There are also services at six international airports within a two hour ground transport radius from Maastricht that Maastricht Airlines will be competing against. These include Brussels Airport, Brussels South Charleroi and Liege Airport in Belgium and Düsseldorf Airport, Düsseldorf Weeze Airport and Cologne/Bonn Airport in Germany. Most of these airports have airlines which offer services to the same destinations Maastricht Airlines plans to serve.

However, the targeting of business travellers who wish to travel directly to their destinations instead of via Amsterdam or alternative airports in Belgium and Germany could prove to be a competitive enough offering. The airline also plans to attract leisure passengers who live in Maastricht and seek to visit major western European tourist destinations.  With some Russian destinations also in its medium-term business plan, Maastricht Airlines may also eventually provide links to eastern European destinations from Maastricht/Aachen Airport.

Local government subsidies will assist the airline in its early stages. The local government is keen to keep passengers travelling to and from Maastricht from using other airports and believes a larger offering at its local airport will help the region’s economy and make it a more attractive destination. However Maastricht Airlines’ real test will be how it performs once the subsidies expire.

Maastricht Airlines’ success will depend on whether it is able to attract enough business clientele and tourists onto its network by providing more convenient services than competitors.  The carrier’s exclusive route network will be crucial for the airline as it tries to encourage passengers to travel with them instead of travelling to other airports or using alternative surface transport options. A tie-up with other larger airlines in the form of an interline and/or codeshare could also help secure the new carrier’s future. Like any regional carrier start-up, Maastricht Airlines faces an uphill battle as it looks to carve out a niche in the tough European market.