Lufthansa’s order for Airbus A350 and Boeing 777X aircraft is a reminder that it is still a major long-haul carrier and that there are two manufacturers. In Feb-2013, Lufthansa ordered 100 A320 family aircraft, signalling an eventual move to an all-Airbus short-haul fleet. Since then, its transfer of short/medium-haul non-hub traffic to Germanwings has been a major focus and rival IAG has also announced significant orders. Lufthansa has now restored its position as Europe’s leading buyer of widebodies, adding to the pressure on Air France-KLM in particular.

On 19-Sep-2013, Lufthansa announced the purchase of 59 new long-haul aircraft for delivery between 2016 and 2025, consisting of 34 Boeing 777-9Xs and 25 Airbus A350-900s. It also negotiated options and purchase rights for an additional 30 of each type. The order will allow it to replace its older widebodies and to pursue modest long-haul growth from 2016. Multi-billion dollar orders are not without risk, but Lufthansa’s cautious approach, together with its balance sheet and track record of cash generation, should help to secure financing.

295 aircraft orders, 92 widebodies, ahead of its rivals

At list prices, the value of Lufthansa's order is EUR14 billion, but the carrier has negotiated “substantial discounts”. As is usual with orders of this kind, it has not disclosed the magnitude of these discounts. Together with existing orders, the new order brings the number of aircraft on order for the Lufthansa Group to 295 (of which 92 are for widebodies), for delivery between 2013 and 2025. This includes 203 narrowbodies and regional aircraft (see table below). At list prices, the total value of the 295 orders is EUR36 billion.

The new order now puts Lufthansa ahead of rivals IAG and Air France-KLM in long-haul and total aircraft orders. IAG has 167 aircraft orders (of which 86 widebody) and Air France-KLM has 65 (of which 59 widebody). This increases the pressure on Air France-KLM, particularly as its delivery schedule sees only single digit numbers of widebody deliveries until the latter end of this decade, whereas both Lufthansa and IAG should receive somewhere in the region of 20 aircraft per year throughout the decade. This puts the Franco-Dutch group at a disadvantage to its two biggest long-haul rivals both in terms of fleet renewal and growth options.

Previously announced orders allow it to continue this replacement rate, but with no growth. From 2016 to 2025, its base case is to grow the total fleet at half the market rate of growth, or around 2% per annum. This growth path is not changed by the new orders, but they now provide the detail of how it will be achieved. 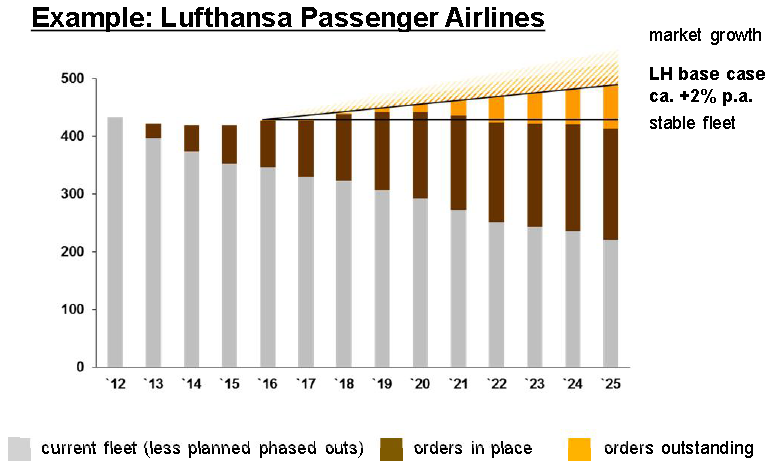 Focusing on Lufthansa’s long-haul fleet, it currently has 107 aircraft in service (excluding SWISS and Austrian, which add a further 43 to the group’s widebody fleet). Its total long-haul order of 203 aircraft will allow it to maintain a broadly stable number of widebodies until 2016, with A380 and Boeing 747-8 deliveries replacing older Boeing 747-400s and A340-300s that leave the fleet. According to the CAPA Fleet Database, its current 747 fleet is aged between around 12 and 24 years and its A340-300 fleet between 12 and 20 years.

From 2016 to 2025, its basic scenario assumes that Lufthansa will grow its long-haul business at 3% per annum, but it also considered alternative scenarios of 1% or 5%. It has flexibility to change its fleet growth path, either through earlier retirement of existing aircraft or through exercising purchase options (which include the option to convert the A350 order to the larger A350-1000). Under the basic scenario, it will use 30 of the 59 aircraft in the new order for replacement and the remaining 29 for growth. 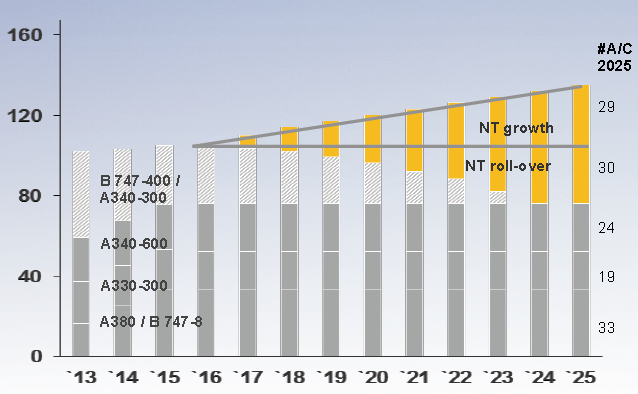 Lufthansa says that the 59 new aircraft just ordered will consume 2.9 litres of jet fuel per 100 passenger kilometres, which is around 25% less than aircraft available today, and that unit costs will fall by around 20% versus predecessor models. It also says that the noise footprint will be at least 30% lower than today’s aircraft.

In parallel to its orders for new aircraft, Lufthansa is continuing with its fleet refurbishment programme. Initiatives include upgrading its first class and business class cabins, new seats in economy and new terminal facilities.

By contrast with the multi-billion euro cost of new aircraft orders, the costs of the refurbishment programme are in the hundreds of millions of euros.

In terms of routes where Lufthansa plans to deploy its new aircraft, it has segmented its markets according to size and the proportion of premium passengers.

The A380 and Boeing 747-8 will replace the Boeing 747-400 on high volume markets where premium passengers account for more than 10% of the total. An example of this is Frankfurt to Shanghai. On routes in this category that are not among the very highest volume routes, Lufthansa will switch from A340-600s to the Boeing 777-9X (e.g. Munich-Shanghai).

On high volume markets with a lower share of premium passengers, the Boeing 777-9X in a two-class configuration will replace Boeing 747-400s (e.g. Frankfurt-Bangkok).

Lufthansa will deploy the A350-900 on medium-sized markets with less than 10% premium passengers and on niche markets with more than 10% premium passengers. Examples of these two categories are Frankfurt to Vancouver and Frankfurt to Malabo respectively. Lufthansa also expects to deploy the A350 in a two-class configuration on niche routes from other group hubs such as Vienna, Zurich and Düsseldorf, where there is a good level of business passengers.

Aircraft financing should not be a problem

Lufthansa plans to fund the new aircraft order with a combination of internally generated cash flow and external funding. CFO Simone Menne told analysts on a conference call to discuss the order that she had no concerns regarding aircraft financing. She did not give further details, but said that EETCs were not currently being considered as they are “too expensive” for Lufthansa.

Lufthansa has a solid balance sheet and is one of only three investment grade-rated airlines in the world, according to Ms Menne, which positions it well in terms of funding its investments in fleet and other assets. Around 90% of its fleet is owned, rather than leased, and more than 70% is financially unburdened (i.e. it has not been offered as security for financing transactions). This adds to its flexibility in considering financing options for its aircraft orders.

Lufthansa fleet that is owned and financially unburdened 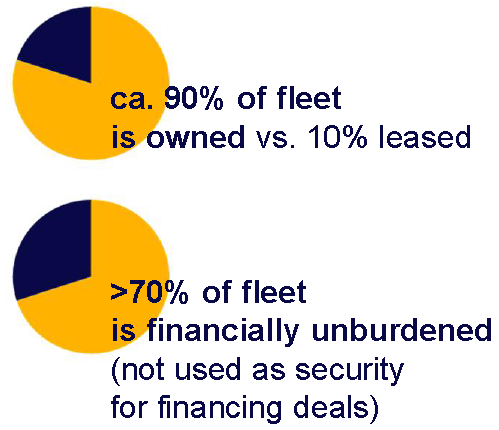 The group’s annual capital expenditure guidance already anticipated the order and so remains unchanged. Capex will rise a little in the coming years, but this had already been communicated and continues a gradually increasing trend over the past decade. 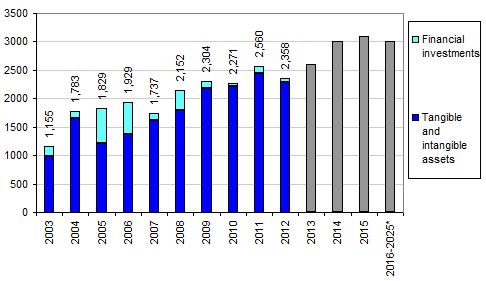 Lufthansa has developed a strong track record of cash flow generation, with operating cash flow almost always exceeding its capital expenditure over the past decade. When disposal proceeds and investment income are added to operating cash flow, the group’s total cash inflow has been greater than its investments every year since 2003. This suggests that its planned higher levels of capex should be affordable from its own cash flows and, if not, it should not be too onerous to add external sources of funding. 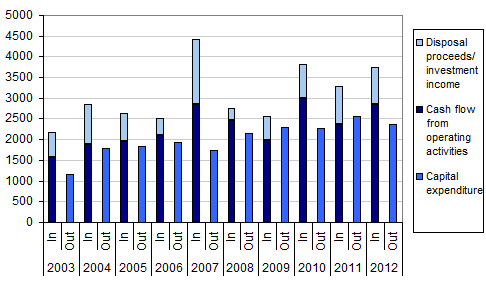 The Lufthansa orders send strong signals to manufacturers and to rivals

In ordering from both Boeing and Airbus, Lufthansa has chosen to avoid becoming dependent on one manufacturer for its long-haul needs. Earlier this year, it had signalled that it would meet its future short/medium-haul needs though Airbus alone. After initially considering buying narrowbodies from both manufacturers, Lufthansa’s Supervisory Board approved the purchase of 30 A320ceo and authorised the Executive Board to continue with negotiations for 70 A320neo.

It did, at that time, also order six Boeing 777-300ERs for SWISS, but Lufthansa is Airbus’ largest airline customer and may have been tempted to use its leverage with Toulouse to place the bulk of its new widebody order with the European company.

That it now has considerably more long-haul orders with Boeing than with Airbus both suggests that Boeing offered attractive terms and demonstrates that Lufthansa can order in sufficient quantities to operate a mixed fleet, choosing aircraft to match different markets.

The order is also a signal to Lufthansa’s rivals that it intends to maintain its leadership position in the European long-haul markets.