European markets fell again on Friday (22-Jan-2010), after US President, Barack Obama, proposed earlier in the week to implement stricter limits on the size and trading activities of banks to reduce risk taking. Banking stocks fell again as a result, with Deutsche Bank and UBS AG sliding over 4%.

Lufthansa (-6.6%) slumped after the carrier stated some analysts had overestimated the carrier’s earnings for 2010, failing to consider "enduring uncertainties" over demand and fuel costs. It was the biggest one-day fall in ten months. See related report: Lufthansa walks the line: Profitability, acquisitions and pilot strikes don’t mix

Also during trading, the carrier called on its pilots to resume talks to avert industrial action. The carrier is confident that a solution for a pay increase and job security can be reached. Vereinigung Cockpit (VC) plans to release the result of its strike ballot on 17-Feb-2010.

Analysts at Juergen Pieper stated a pilot strike this year is very likely, cutting their rating from ‘Buy’ to ‘Sell’ as a result.

Turkish Transport Ministry reportedly announced on Friday that Turkish Airlines (-1.8%) and Aeroflot have held discussions regarding the launch of a new JV carrier. For more information, see today's edition of Europe Airline Daily. 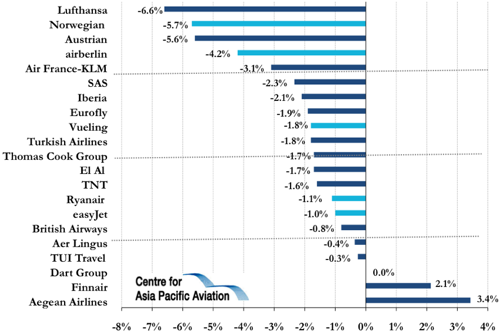