Shares in Lufthansa dipped 1.0% yesterday, as investors digested a huge amount of activity at the German carrier. Its takeover of Austrian Airlines aside, the carrier reports “there is no improvement” in Business class demand and it is still seeing customers switching from premium to economy seats. However, Lufthansa has seen the decline is Business class demand "stabilise".

Meanwhile, Lufthansa has been expanding its commercial cooperation with JetBlue Airways. The two carriers signed a codeshare agreement to initially offer a connecting service between 12 JetBlue destinations in the US and Puerto Rico, and Lufthansa's network of 180 destinations in Europe, the Middle East, Africa and Asia. In Jan-2008, the two airlines entered into an agreement under which Lufthansa purchased a 19% ownership interest in JetBlue.

Shares in Air France-KLM were down 1.5%, while the Paris CAC Index lost 1.07% yesterday. Elsewhere, British Airways and Aer Lingus did not trade yesterday, as the London Stock Exchange was closed. 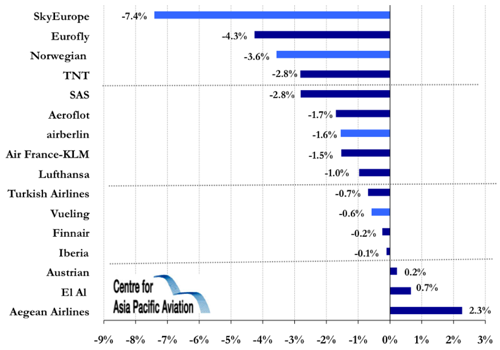