Shares in Lufthansa gained 1.6% on Friday, as the European Commission (EC) approved its takeover of Austrian Airlines and granted anti-trust immunity for the carrier to be part of the Lufthansa Group as of Sep-2009.

The EC’s approval included EUR500 million in restructuring aid by the Austrian Government. Austrian Airlines’ shares gained 1.4% on Friday, as shareholders of the carrier offered a total of over 75% of the necessary shares of Austrian Airlines for sale, meeting Lufthansa’s preconditions for the merger. The merger will be closed within the next ten stock exchange trading days, after which Austrian Airlines becomes a member of Europe’s largest airline alliance (see below).

The merger is conditional upon the implementation of a set of remedies offered by Lufthansa to remove the Commission's competition concerns. Lufthansa has submitted commitments, which have removed the competition concerns on the five routes of concern to the EC. Other restrictions on the merger include a reduction in capacity by Austrian Airlines of 15% from its Jan-2008 level by the end of 2010. Thereafter Austrian Airlines' growth will be capped at the average of the growth rate observed for member airlines of the Association of European Airlines. The cap will remain in place until the end of 2015 or until Austrian Airlines reaches an operational break even, whichever comes first. Austrian Airlines will also reduce its shareholding in Schedule Coordination Austria to 25%.

Elsewhere, shares in Air France-KLM gained 0.5% on Friday, while British Airways (BA) rose 2.1%. BA CEO, Willie Walsh, and the carrier’s Unite union, representing 28,000 workers at the carrier, have resumed negotiations. Aer Lingus also plans to implement pay cuts by the end of 2009. Shares in the carrier were up 2.9% on Friday. 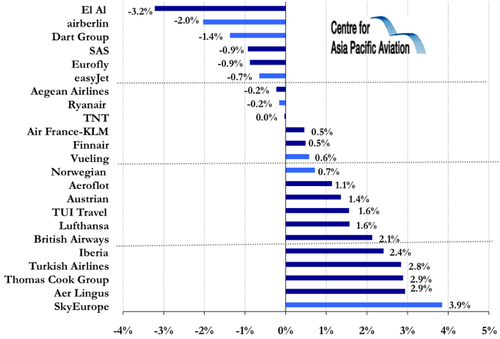 Peter Malanik and Andreas Bierwirth, members of the Austrian Executive Board, stated “in Lufthansa, we have found an excellent partner for Austrian Airlines, which will enable us to offer our customers an even larger and more attractive route network in future. The economic basis of Austrian Airlines improves enormously as a member of the Lufthansa Group.”

“Lufthansa is a huge opportunity for us. It is not an excuse for us to rest on our laurels, however. The Lufthansa Group has enormous thrust. But it will be up to us to throw the lever to ensure we can transform that thrust into the speed and altitude we are going to require. We must do our homework. We must steadily continue to implement the programme for increasing profitability we launched one year ago. If we manage to do this, then we too will be successful,” Bierwirth and Malanik said. “Our goal is to use our competence in Central and Eastern Europe, and to establish Austrian Airlines and its Vienna base as a high-performance hub for the Lufthansa Group, carrying traffic throughout Eastern Europe.”