Lufthansa, Air France and British Airways stoppages in the air. Three strikes and you’re out?

The silly season is under way, as pilots (at Lufthansa), flight attendants and pilots (at British Airways), and air traffic controllers (France and Spain) all signal a willingness to hold the blowtorch at the feet of management. As spring fever strikes early, surface transport and other sectors also coming under threat, with Greece enjoying a series of national strikes against the economy in general.

But there are certainly going to be more than three strikes along the way, as Spring turns into Summer.

Equally, there promise to be lots of outs – of labour, but also probably one or two airlines before the year is out.

2010: the year when reality strikes? Compromises unlikely to help

There is more to these threats than merely the usual dispute over salaries – although the German pilots in the Cockpit union are also asking for a 6% pay rise and guaranteed jobs for the next few years. The more fundamental challenge, both for management and for labour is how to adjust to the new world of reduced premium travel and more low cost competition. That is the reality and no strikes or salary increases are going to make that go away.

That is why the present rash of discontent is so much harder to solve through the usual process of compromise; quite simply it is insoluble without either side recognising that the status quo is no longer supportable. Many managements must have been hoping a comfortable bounce-back in economic conditions would provide the usual brief respite from the reality that the legacy model needs fundamental reappraisal. But there is almost certainly not going to be one – making tough actions inevitable apparently on all sides.

The prospect of long term structural change is not what anyone wants. That is, unless they happen to be responsible for trying to make their airline cover its costs.

So, confronted by the need not just for temporary stop-gap compromises, but for durable solutions, it really does seem as if something has to give. Either labour has to back down, or some airlines need to exit the market.

A litany of confrontation in prospect

British Airways' cabin crew, represented by Unite, last week announced its members had voted “overwhelmingly” (although not quite as overwhelmingly as they did late last year) for strike action, in the long-running dispute over changes to crew numbers and work practices. With this gun at the head of management, Unite announced this week that “meaningful discussions” between the union and the carrier have been held since the two resumed talks; meanwhile management stated “some progress” has been made.

When BA’s cabin crew previously planned to strike over Christmas and the new year, there was extensive unfavourable publicity surrounding the generous remuneration the cabin crew received in comparison with the airline’s competitors. Perhaps for that reason, this time around, Unite has made it clear that there will not be strike action over the peak Easter period in late March/early April. However, the gun is loaded and the trigger cocked.

British Airways has already moved to impose a pay freeze on cabin crew and introduced new contract terms for new crew members, including a lower rate than established crew. It has also reduced the number of long-haul cabin staff from 15 to 14 per aircraft. Estimates for strike action put the cost as high as GBP25 million per day, so the carrier is ready for confrontation, with management staff being trained in case of a strike, Says management: “we will not allow Unite to ruin this company. Should a strike take place, we will do everything we can to protect our customers’ travel plans as far as possible,”

That is not the end of BA’s employee problems. BALPA, the airline’s pilot union, launched action yesterday in the UK Supreme Court to secure "proper" holiday pay for pilots. The union claims "a BA pilot on holiday will take home less pay than if he or she was working - something unheard of in other businesses and industries." The two day hearing will be the first time a union has appeared in the Supreme Court.

According to BALPA General Secretary, Jim McAuslan, this action will potentially have an industry wide flow-on. "The Court's decision will have a momentous impact on civil aviation in the UK... We are not only taking action against BA. We have tribunals lodged against Virgin, BMI, easyJet and Cityflyer.”

The forces for restructuring are not confined to airlines. Europe’s primitive system of multiple, territorial air traffic control is gradually being rationalised. But France’s very well paid controllers are in no hurry to lose their jobs, if that is to be the result of consolidation. So they shut down France’s airspace this week.

The strikes are specifically to protest a (long term) planned merger of Belgian, Dutch, French, German, Luxembourg and Swiss air traffic control networks. The controllers are concerned that this could result in job cuts and the loss of civil servant benefits.

Meanwhile, Air France’s two pilots’ unions are also restive; UNPL and R'Way gave notice in early Feb-2010 of strike plans for 26–Feb to 1-Mar-2010, but these have been delayed as talks continue.

A planned four day pilots’ strike earlier this week, led by Vereinigung Cockpit, was limited to one day, but still caused disruption of services and cancellation of around 800 of the carrier’s 1,800 daily flights, with the system still recovering. This strike was suspended following court action by Lufthansa and a commitment to resume negotiations. The carrier had earlier promised job security until 2012 if the pilots returned to the negotiating table, on the provision that Cockpit would not seek “undue influence” in managerial decisions. But this industrial dispute has more to run. The long term issue is over Lufthansa’s use of (lower cost) subsidiary airlines to provide services where Lufthansa itself, with its higher cost base, would normally have operated. It is not going to be resolved – in a way that provides a long term sustainable base – through extensive compromise.

Lufthansa, like British Airways, also has relatively expensive cabin crew, who are also keen to maintain their status. Unions representing the carrier’s 16,000 cabin crew have also threatened to strike if there is no agreement over a new wage contract. The current contract expires on 28-Feb-2010, with unions recently claiming Lufthansa is refusing to hold talks.

And others are coming under fire

The need for change is not only affecting the three major airlines. Aer Lingus for example admitted this week that it had a “hard sell” ahead of it as it commenced a staff ballot over its EUR97 million cost cutting plan . The plan involves 600 redundancies, pay cuts of up to 10% and a three year pay freeze. SAS, Finnair and others are also either about to confront strike threats, or in the throes.  For example, tiny Croatia Airlines cabin crew plan to strike on 26-Feb-2010, after the staff’s union failed to reach an agreement with the carrier over a new collective agreement. Management stated the union's demands had been “unrealistic” and the strike is unjustified.

A showdown for Greece?

Then of course, there are the Greek unions. Industrial action is a national pastime and no-one does national strikes better or more often than Greece. The total shutdown yesterday would have done wonders for the government’s attempts to persuade European Community members to support Greece in its hour of need (again). This necessarily disrupted all air services to and from the country too, hard on the heels of Aegean throwing in the towel in its attempt at a separate existence from Olympic.

Now, with a little more industrial action, it may even be possible to snatch defeat from the jaws of victory (a newly viable Olympic). As a symbol of what ails the once proud country, its flag carrier’s tumultuous existence could not be more pungent. Hopefully it will not succumb.

Greece’s unions say they realise that the country has to do something about its deficit – but that it should not be salary earners who bear the burden. This does not mesh well with the need for a much-needed new Greek moderation. The country’s airlines will be right in the firing line, as the fight for economic survival lingers on into the holiday season.

Who will be out next?

Both Olympic and Alitalia teetered on the brink last year, confronted by the reality of a (usually) firm line on government subsidy from Brussels. Alitalia seems to have been rescued, as did Olympic, but the airline is hardly invincible, especially in the face of promised perpetual strikes at home.

Then there is SAS, whose government shareholders have finally decided they have had enough and want to sell out, is not out of the danger zone either. A few sales of its more marketable assets and a “core” activity strategy has ensured that the airline business will in future have to pay its own way. But a concrete-like multi-union structure will make that a real challenge.

Europe has already seen some national airline rationalisation, albeit probably much less than was necessary. With mergers and/or substantial rationalisation the only way to retrieve some of the loss ground and prepare for a sustainable future, this year promises to offer a challenging industrial relations year – one in which compromise will not be able to play its usual role. 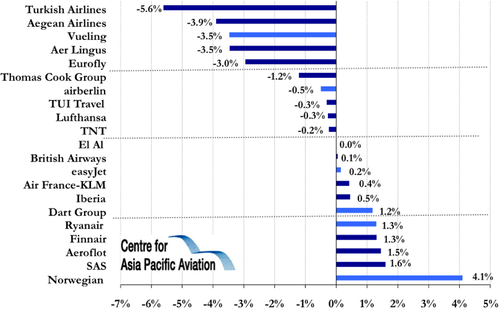