According to Lufthansa Group CEO Carsten Spohr, 3Q2014 "was no walk in the park". The group's business was affected by weak revenue conditions, external events such as Ebola and the Ukraine crisis - and more strikes by Lufthansa pilots.

Mr Spohr's agenda continues to be very full. He must seek further cost reduction in the network airline business, while continuing to position as a premium product; repair relations with Lufthansa's pilots; develop and grow new lower cost point to point airline platforms; and capture growth in the more stable aviation services markets. And he must return Lufthansa to a profit growth trajectory after years on a falling trend.

Normalised operating result increases, but from a new depreciation policy

In 3Q2014, the Lufthansa Group increased its net income by 25% to EUR561 million. Revenues grew by 1.9% year on year to EUR8,458 million. The operating result, which more closely reflects the underlying performance of the group, also grew by 25% and reached EUR735 million.

In order to adjust for a high volume of restructuring costs and project costs, largely in connection with the group's SCORE programme, Lufthansa also presents a 'normalised' operating result. Due to a lesser amount of these one-off costs in 3Q2014 versus 3Q2013, the normalised operating result increased at the slower rate of 10%, to EUR785 million.

To complicate matters further, Lufthansa changed its depreciation policy this year so that it now depreciates its aircraft over 20 years to a residual value of 5%, compared with its previous policy of 12 years to 15%. This leads to lower annual depreciation charges and brings Lufthansa more in line with other European airlines. The group's 3Q2014 depreciation cost was EUR70 million lower than a year earlier, just exceeding the EUR68 million improvement in the normalised operating result.

In other words, the normalised 3Q operating result would not have been higher than last year if the depreciation policy had remained the same.

The Passenger Airline Group, which accounted for more than three quarters of the Lufthansa Group's external revenue in 9M2014, recorded a 1% fall in revenues and a EUR41 million reduction in its 9M operating result. Adjusting for one-off restructuring and project costs, its operating result increased by EUR54 million, but this is significantly less than the EUR267 million boost to its result from the lower depreciation rate. Just looking at 3Q2014, the Passenger Airline Group's operating profit before one-off items fell by 3%, in spite of a EUR78 million reduction in depreciation.

Austrian Airlines' 3Q operating profit fell by 32% to EUR37 million and its 9M2014 operating result fell by EUR26 million to a loss of EUR7 million. Austrian has recently reached a draft agreement with flight crew representatives that will see a lower cost structure, with reduced salaries and improved productivity. It will also involve the reintegration of operations from Tyrolean Airways back into Austrian Airlines from Mar-2015.

The Logistics segment saw an improved performance in 3Q after its operating result had deteriorated in 1H2014. Its 3Q operating result swung from a loss of EUR17 million last year to a profit of EUR17 million in 3Q2014 its 9M profit improved by 13% to EUR51 million. Its revenues grew by 4% 3Q, after falling by 5% in 1H, so that 9M revenues fell by 2%. Cargo load factor was maintained at around 69% for 9M2014, on 1% lower capacity, and cargo yield stabilised (-0.7%). 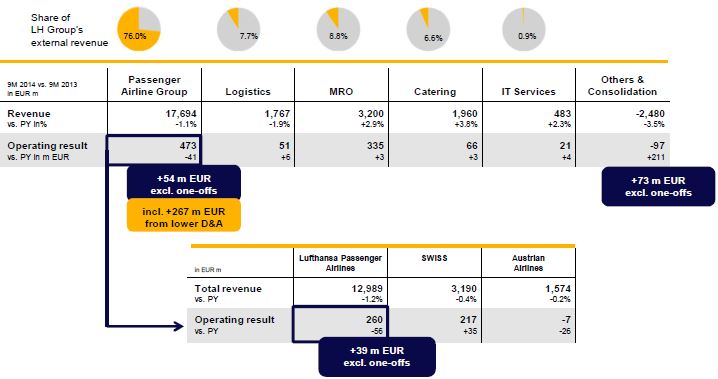 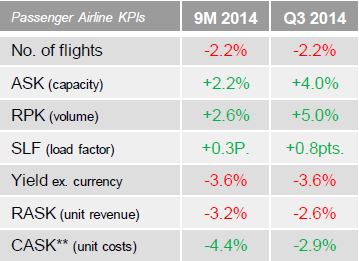 RASK was weakest in America and Asia Pacific

The biggest fall in RASK was in the America network, where it fell by 7.6% and where ASK growth of 10.9% was also the highest. This strong capacity growth reflected new routes to Montreal and Mexico and larger aircraft to Miami and Rio de Janeiro. CEO Carsten Spohr told analysts on a conference call to discuss the 3Q results that, although unit revenues fell in this network, larger aircraft also led to lower unit costs and the North Atlantic was the most profitable region for the group.

RASK also fell on the Asia Pacific network in 3Q (-3.1%), where the group increased its ASKs by 4.0%. Lufthansa's 9M2014 interim report says that competition is "particularly tough" between Europe and Asia and blames "overcapacities, especially at the rapidly growing Middle Eastern airlines" for depressing its results. 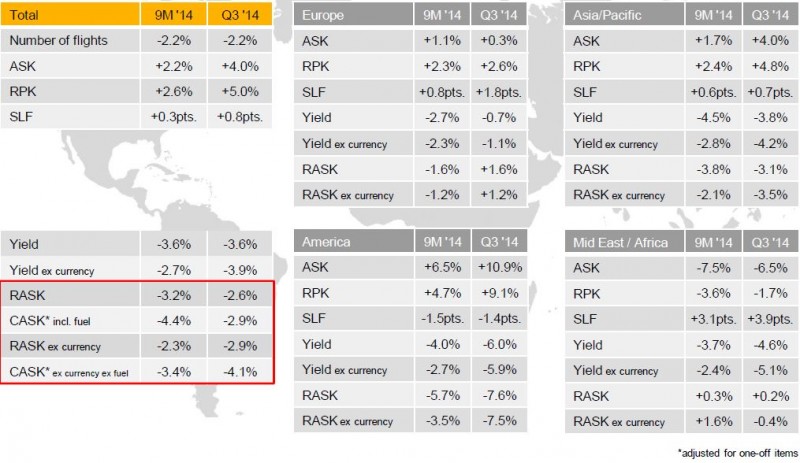 For 9M2014, reported operating costs fell by 1.6%, but adjusting for one-off project and restructuring costs and the changed depreciation policy, the like for like reduction in costs was only 0.4%. Although keeping costs just below flat in spite of a capacity increase is creditable, this was less than the 0.6% reduction in total operating revenue. Without the one-off costs and if the new depreciation policy had applied last year, the 9M2014 operating result is 10% below the equivalent 9M2013 result. 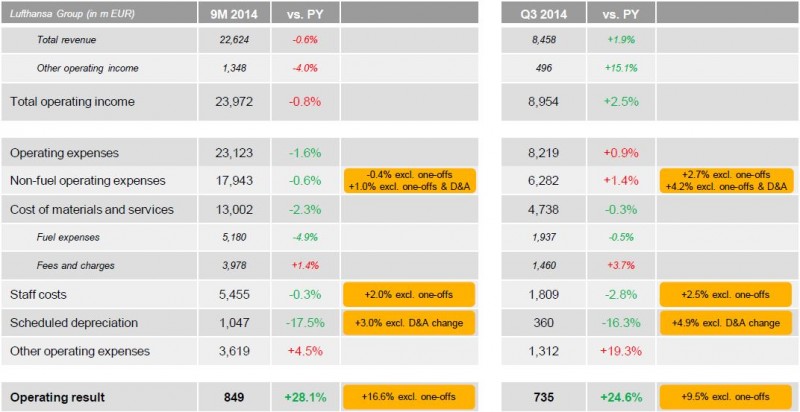 In spite of an adverse EUR35 million strike-related impact on the 3Q2014 result (EUR170 million impact on 9M2014), Lufthansa has retained its FY2014 operating profit guidance of EUR1 billion, or EUR1.3 billion on a normalised basis (ie excluding one-off restructuring and project costs).

As we have previously noted, this normalised figure is around 8% less than the equivalent result for 2013 would have been if the new depreciation policy had applied then. The only additional caveat to this 2014 guidance is that it does not include the impact of any further strikes that might take place. 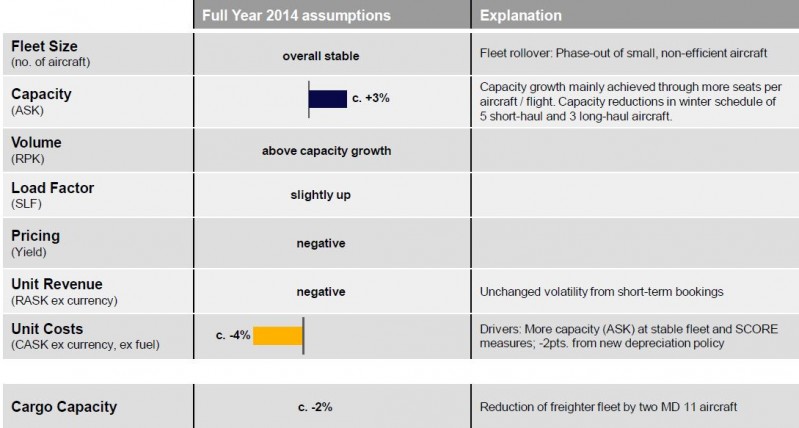 Although the overall guidance for 2014 has not changed, there are some adjustments at the segment level.

The Passenger Airline Group is still expected to report an operating result slightly above last year, but the outlook for Lufthansa Passenger Airlines is now forecast to be only level with last year, rather than slightly better. This reflects revenue weakness and the impact of the pilot strikes. In addition, Austrian's result is now expected to be below last year's, rather than level with it. 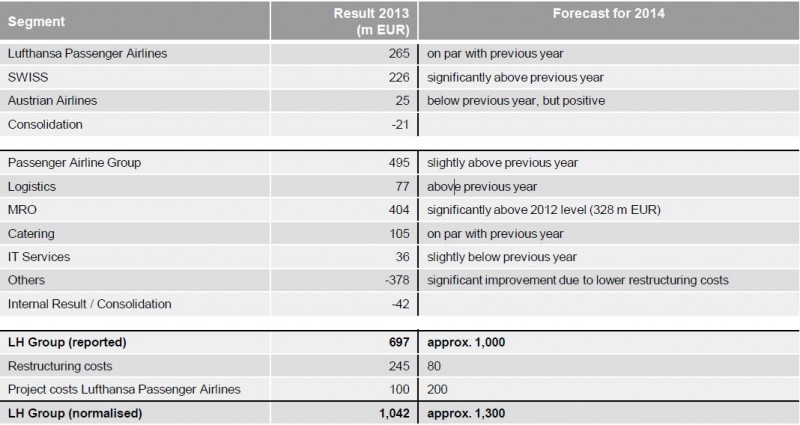 …but Lufthansa's 2015 outlook has been lowered

Lufthansa has become more cautious about its prospects for 2015. At the start of this year, its target for the 2015 operating result was EUR2.65 billion. At the mid year point, this was revised down to EUR2 billion and Lufthansa has revised it once more.

It has not given a new figure, but says that the 2015 operating profit outlook is reduced to "significantly above" 2014. It plans ASK growth of 3% in 2015, but this could be trimmed if demand were to weaken further.

Given that it should not have the same level of one-off costs in 2015 (expected to total around EUR280 million in 2014), this must translate into a minimum of EUR1.3 billion, half the level anticipated in early 2014. This more cautious target for next year reflects what Lufthansa calls a "darkening economic outlook", weaker pricing and the inflation of its pension costs (the latter the result of lower interest rates reducing the discount rate).

A lower profit outlook may have implications for Lufthansa's investment plans and CFO Simone Menne admitted on the 3Q results call that its capex plan may be revised. An important part of Lufthansa's positioning is to promote and maintain its perception as a premium product. Given its high cost structure, this is a necessity as it must generate a revenue premium, but this strategy requires ongoing investment.

With the exception of the 2010 bounce-back from 2009's very low operating result, Lufthansa's core profitability has been on a broadly downward path since 2007. There is no margin for further deterioration in the 2015 outlook if Lufthansa is to demonstrate that it can resume a path of rising profits. 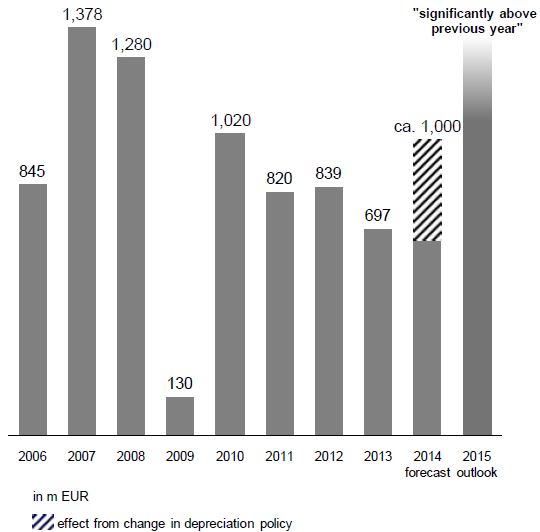 Alternatives to network airline growth are vital for generating profits

Mr Spohr recognises that Lufthansa needs to generate a "profit level high enough to fund capital expenditure and provide an additional return to investors". He told analysts on the 3Q results conference call that the "growth potential" of each business segment was "dependent on the competitiveness of their respective cost structure".

This means that, for now, there will continue to be no growth in the network airline fleet at the group's hubs until the cost base of the mainline hub operation is competitive. This will not be possible with "outdated compensation structures and pension schemes designed for a bygone era". Mr Spohr is not prepared to give way in the dispute with pilots over early retirement and the development of lower cost platforms such as Germanwings.

In fact, in spite of being lower cost, the group's point to point activity is not yet profitable, although Lufthansa expects it to reach breakeven in 2015. There is still work to do to achieve this and then to take its profitability to sustainable value-creating levels.

But this will be a vital step in Mr Spohr's campaign to demonstrate to unions in the network airline that there are alternative growth options that can be profitable.